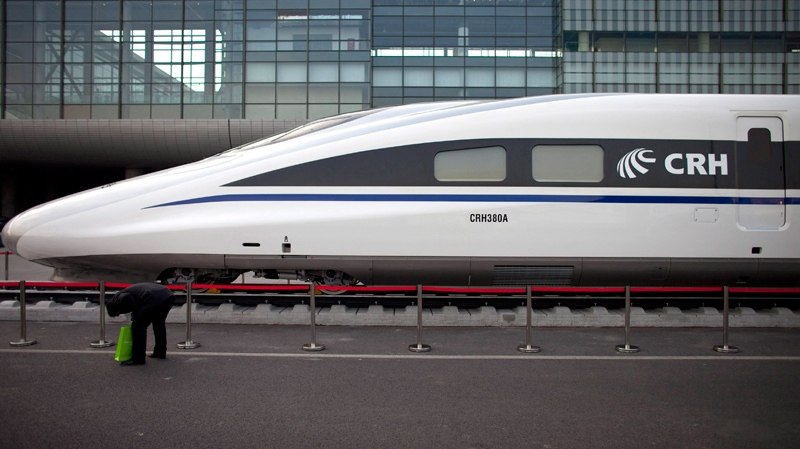 A man bows down to check a CRH380A high speed Chinese passenger train, the model that hit a record speed of 486 kph during a test run of a yet-to-be opened link between Beijing and Shanghai, outside the venue of 7th World Congress on High Speed Rail in Beijing, China, Tuesday, Dec. 7, 2010. (AP / Alexander F. Yuan)

Imagine being able to travel to a city 500 kilometres away in less than two hours, without the hassle of driving through miserable traffic to far-flung airports, without feeling violated by airport security, and actually being able to use that expensive phone in your pocket.

This is a reality in the 20 countries around the world with high-speed rail. But it's an abstract fantasy in Canada, the only country in the entire G8 without at least one such system.

It's been 46 years since Japan unveiled its first high-speed rail systems, but Canada is languishing with a rail system from the 1950s that one rail activist calls a national "embarrassment."

"Who can defend what we have? The public has to say ‘Enough is enough' and tell our government that we need . . . modern passenger rail like the rest of the world has," Paul Langan of the group High-Speed Rail Canada told CTV.ca

The arguments for high-speed rail make it seem like a no-brainer; it's understandable why 88 per cent of Canadians said they supported high-speed rail in a 2009 Ekos poll, compared to the mere six per cent who opposed it.

So, if Canadians want high-speed rail and the benefits seem enormous, what's the hold up? In Canada, the problem is somewhat twofold. The cost is prohibitive, and would require an enormous investment from federal and provincial governments. Secondly, Canada's small population over its vast landscape limits its feasibility to only a few areas of the country.

Conservative MP Dean Del Mastro, who has chaired an all-party caucus on rail since 2007, says he supports high-speed rail, particularly a Toronto-Ottawa-Montreal line, but that it is not economically feasible at the time.

"It's more expensive than building about any other kind of infrastructure," he added.

Two potential corridors are oft-cited for their high-speed rail potential – Quebec City to Windsor, Ont., and between Edmonton and Calgary. The cost of the Quebec- Windsor line has been estimated to be anywhere from $6 billion to $30 billion, depending on the type of rail used.

Jeff Casello, a professor of transportation planning and engineering at the University of Waterloo, says there's a strong argument to be made specifically for the Quebec-Windsor corridor, where half of Canada's population lives.

He says the capacity of Toronto's Lester B. Pearson Airport and Highway 401 is maxed out, making high-speed rail an attractive alternative.

"I think there's very strong consideration on the (Quebec-Windsor corridor) considering the limits on Pearson and its ability to handle any more traffic and the unwillingness to invest in widening the 401," he said. "There's realization that there needs to be some redundancy in our transportation network, so we can't rely on a single mode to satisfy all our transportation needs.

"If something closed the 401 for an extended period of time, there are very few other alternatives."

So, how did we get here?

If you are say, less than 70 years-old, you probably don't remember a time when passenger trains ran frequently or efficiently in Canada.

By the early 1970s, railways were increasingly unprofitable in Canada and then-Crown corporation CN pushed to rid itself of its passenger service. Prime Minister Pierre Trudeau formed VIA in 1976, but since CN owned the tracks, Canadians travellers have been second-class to cargo on the lines ever since.

"It was better in the 1950s," Langan says, referring to passenger service in Canada.

Two generations of Canadians have virtually no concept of what proper rail service can be like unless they've travelled to Europe or eastern Asia. So while many Canadians like high-speed rail in theory, it seems about as realistic as hovercars. And that makes it easy for politicians to forget about high-speed rail as public policy.

"There's no vision, there's no policy," Langan says of the federal government.

"We haven't had viable passenger rail for 50 years, so people can't see it as a viable option."

But for high-speed rail advocates there was hope to be found in the despair of the recession, as governments began throwing money at infrastructure projects for economic stimulus.

In April of 2009, U.S. President Barack Obama announced $8 billion in investment for high-speed rail for 10 different lines across the country.

"High-speed rail is long-overdue, and this plan lets American travellers know that they are not doomed to a future of long lines at the airports or jammed cars on the highways," he said, adding traffic and road congestion costs the U.S. economy $80 billion a year in productivity.

However, Obama has had a bit of trouble implementing the plan (newly-elected governors in Ohio and Wisconsin recently turned down the cash), but the move was a significant step for road-obsessed America.

In Canada, there was no equivalent announcement coming out of Ottawa.

The budget promised an additional $407 million to VIA for infrastructure and capital improvements on its aging rail system. The investment was part of nearly $1 billion announced for Via since 2007.

Del Mastro said he was surprised how little attention was given to the announcement, given that the project would allow trains to travel at a peak of 160 kilometres an hour and reduce travel from Montreal to Toronto by 30 minutes.

But there was not one dollar for true high-speed rail, with the government instead focused on "shovel-ready" projects that could get underway immediately.

"When you spend that massive amount of money on roads all you are doing is creating make-work projects," he said. "It's not providing long-term jobs, its not providing the economy with a new boost.

So where does that leave us in Canada? Are we forever doomed to curse at bad traffic and long airport lines, to wait four hours if we miss a Via train? Or do we need to change our perspective?

The Quebec, Ontario and federal government launched a $3-million study in 2009 on the viability of a Quebec City to Windsor high-speed rail line. It was supposed to be finished in early 2010, but the Ontario government will only say now that it will be finished in a "timely manner."

"We will make the report public as soon as possible after it has been completed. The governments will be reviewing the study findings in early 2011. We will subsequently identify the mutually agreed upon next steps and the timing for the report's release," Bob Nichols, senior media liaison officer, with the Ontario Ministry of Transportation said in an email.

"The study will no doubt say that people like the idea of it . . . the concept of it is popular, the challenge of significant and the cost of building it is substantial," Del Mastro said.

In July of 2009, the Alberta released a market report on the feasibility of a Calgary-Edmonton high-speed rail line.

While the report says Alberta stands to gain $33 billion in economic benefits from a top-of-the-line high-speed system, the government has not moved forward in any meaningful way.

"We have not made a decision on a high-speed rail project, however, this report is a good first step. We will continue to look at all options in order to support Albertans and the province's economic future," Transportation Minister Luke Ouellette, said in a statement at the time.

Not surprisingly, they are still looking at "all the options" in Alberta, more than a year later.

John F. Kennedy is remembered as the president who got America on its way to the moon, John A. MacDonald as the prime minister who helped build the Canadian Pacific Railway. As for which politician will be known for bringing high-speed rail to Canada, that remains a very open question at start of 2011.