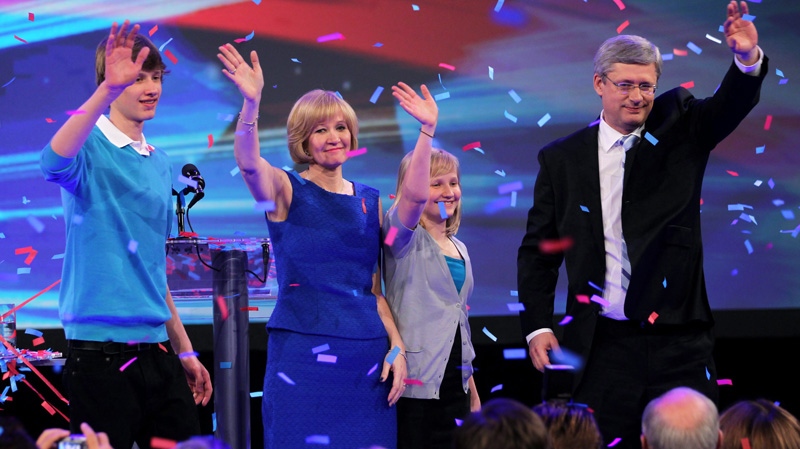 Prime Minister Stephen Harper along with his wife Laureen, daughter Rachel and son Ben wave to the crowd as they arrive on stage following his majority win in Calgary, Alta, Monday, May 2, 2011.

OTTAWA - If he said it once, he said it a thousand times: what Prime Minister Stephen Harper was campaigning for in the 2011 federal election was a "strong, stable, Conservative majority government."

The fact he got it -- and what he's doing with it -- has been named Canada's News Story of the Year by editors and news directors who participated in the annual survey of newsrooms across the country by The Canadian Press.

"I think it presents a sea change in Canadian politics," said Dan Leger, director of news content for the Halifax Chronicle-Herald.

"It was fairly predictable, it was not a surprise, the polls suggested it was going that way, but what has happened is the Tories have supplanted the Liberals for many years to come, I believe, and unless the rest of Canadian politics gets its act together, Stephen Harper is going to be prime minister for as long as he wants."

The Conservative majority captured 25 per cent of the votes in the annual CP survey -- narrowly beating out the NDP's surge to official Opposition status, which earned a nod from 24 per cent of those newsrooms that voted.

Together, those two sides of the Election 2011 coin dominated the other nominees. The post-Stanley Cup riots in Vancouver earned 12 per cent of the vote, the wildfires in Slave Lake 11 per cent and the Occupy protest movement eight per cent.

The end of the mission in Afghanistan and the corruption scandal in Quebec each got three per cent of the vote, with the controversy over head shots and enforcers in hockey, Prince William and Kate's visit to Canada, the decline of the separatist movement in Quebec and the proposed Keystone XL pipeline each getting two per cent.

The declining fortunes of BlackBerry maker Research in Motion, the return of the Winnipeg Jets and Canada's new female premiers each got one per cent of the vote.

The Canadian Press also conducted a parallel survey in conjunction with Yahoo! Canada to allow the public to make its own choices for News Story of the Year.

There, the story of late NDP leader Jack Layton's political triumph dominated, earning 18 per cent of the votes cast, followed by the royal visit at 11 per cent and the Occupy movement at just over 10 per cent.

Indeed, Layton's story had all the drama of a Hollywood script, said Andrew MacDonald, Yahoo! Canada's managing editor for news.

Layton, "the federal underdog, captures the nation's attention throughout an election campaign that Canada had been dreading, gains enough popularity to have the NDP elected Opposition for the first time ever -- and then just a few months later succumbs to the disease he had fought so hard and so publicly," MacDonald said.

"I think a lot of Canadian voters could see a bit of themselves in Jack Layton -- which is not something you heard said about Stephen Harper or (Liberal leader) Michael Ignatieff."

Harper's majority win garnered nine per cent of the public votes, enough to finish fifth in the Yahoo! Canada survey.

The Conservative triumph came precisely because voters were able to connect with Harper after having experienced five years of his minority government, said Guy Giorno, the co-chairman of the party's national campaign.

"Stephen Harper has broadened the base of the Conservative party," Giorno said. "He did it by showing people, demonstrating that as prime minister he would lead a moderate, reasonable, responsive government."

Both the Tories and the NDP ran disciplined campaigns that rarely strayed off message.

The Conservative "strong, stable majority" slogan and a targeted approach to winnable ridings ran up against a NDP electoral machine that was revving at top speed -- and not just in Quebec.

Ron Woodman, who ran the NDP's successful campaign in the Newfoundland-Labrador riding of St. John's South-Mount Pearl, said candidate Ryan Cleary found himself with more money, more volunteers and far more excitement in 2011 than in prior elections.

"The buzz of a winning campaign was certainly there," said Woodman.

"I think we would have won without the surge, but it certainly didn't hurt that it looked like New Democrats, especially in that last week, could possibly form government."

Experts and observers are divided as to whether Canadian voters are splitting along ideological lines, creating a polarized political atmosphere similar to the Republican versus Democrat scene in the United States.

What the outcome of the 2011 campaign does reflect, however, is how well both parties built their respective brands, said Terry Smith, a branding strategist at ICON Communications & Research Inc. in Nova Scotia.

Smith said Harper took ownership of the economic issue, while Layton's charisma and promise of change made him attractive to voters.

"Having a strong leader is imperative and having that leader as central to the brand is usually imperative for having any kind of political success."

"Brand Layton" was perceived as being largely responsible for the NDP's sweep of 59 of 75 seats in Quebec, but the surge there wasn't an overnight accident, said Anne McGrath, Layton's chief of staff.

One of the first things Layton did when he won the leadership of the party was appoint a Quebec adviser, McGrath said.

"He was just really always very dedicated to the need for a national party to have a base and support in the province of Quebec."

But Layton's death from cancer in August threw the country off its political axis, leaving the NDP rudderless in Ottawa against a majority government with a clear plan.

Since they returned to Ottawa, the Conservatives have set about fulfilling what campaign promises they could; a number of platform pledges were contingent on a balanced budget that's now not expected before 2015, despite a promise during the campaign it would be done a year sooner.

But they are slaying policy giants like the Canadian Wheat Board, the gun registry and the political financing system, while at the same time creating new Goliaths in the form of an omnibus crime bill that's raised the ire of lawyers, criminologists and the observers alike.

Meanwhile, the NDP searches for their new leader.

The ongoing leadership campaign has knocked several of the party's strongest players off the front benches in the House of Commons, raising questions about the party's overall sustainability as official Opposition.

"At the same time as the NDP are getting elected in this wave in Quebec, you're actually returning a Conservative majority, which means the opposition has even less power against the government," said Bruce Hicks, a political science professor at Concordia University in Montreal.

"So whatever expectations the voters may have had about the NDP, they were destined to fail because the NDP can't stop the government."