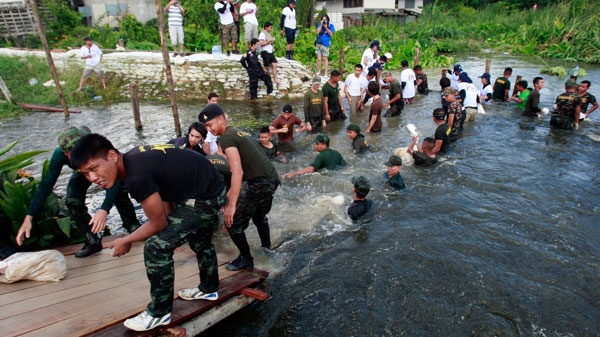 A draft summary of an international scientific report obtained by The Associated Press says the extremes caused by global warming could eventually grow so severe that some locations become "increasingly marginal as places to live."

The report from the Nobel Prize-winning Intergovernmental Panel on Climate Change marks a change in climate science, from focusing on subtle shifts in average temperatures to concentrating on the harder-to-analyze freak events that grab headlines, hurt economies and kill people.

The final version of the report from a panel of leading climate scientists will be issued in a few weeks, after a meeting in Uganda. The draft says there is at least a 2-in-3 probability that climate extremes have already worsened because of man-made greenhouse gases.

The most recent bizarre weather extreme, the snowstorm that crippled parts of the U.S. Northeast last weekend, cannot be blamed on climate change and probably is not the type of storm that will increase with global warming, according to four meteorologists and climate scientists.

By the end of the century, the intense, single-day rainstorms that typically happen once every 20 years will probably happen about twice a decade, the report said.

The opposite type of disaster -- a drought such as the stubbornly long dry spell gripping Texas and parts of the Southwest -- could also happen more often as the world warms, said Schmidt and Meehl, who reviewed part of the climate panel report.

Studies have not yet specifically tied global warming to the continuing drought, but it is consistent with computer models that indicate current climate trends will worsen existing droughts, Meehl said. Scientifically connecting a weather disaster with global warming is a complicated and time-consuming task that can take more than a year and involve lots of computer calculations.

Researchers have also predicted more intense monsoons with climate change. Warmer air can hold more water and impart more energy to weather systems, changing the dynamics of storms and where and how they hit.

Thailand is now coping with massive flooding from monsoonal rains -- an event that illustrates how climate is also connected with other manmade issues such as population growth, urban development and river management, Schmidt said.

In fact, the report says, "for some climate extremes in many regions, the main driver for future increases in losses will be socioeconomic" rather than a result of greenhouse gases.

The panel was formed by the United Nations and World Meteorological Organization. In the past, it has discussed extreme events in snippets in its report. But this time, the scientists are putting them all together.

The report, which needs approval by diplomats at the mid-November meeting, tries to measure the confidence scientists have in their assessment of climate extremes both future and past.

Chris Field, one of the leaders of the climate change panel, said he and other authors declined to comment because the report is still subject to change.

The summary chapter did not detail which regions of the world might suffer extremes so severe as to leave them only marginally habitable.

The report does say scientists are "virtually certain" -- 99 per cent -- that the world will have more extreme spells of heat and fewer of cold. Heat waves could peak as much as 5 degrees hotter by mid-century and even 9 degrees hotter by the end of the century.

From June to August this year in the United States, blistering heat set 2,703 daily high temperature records, compared with only 300 cold records during that period. That made it the hottest summer in the U.S. since the Dust Bowl of 1936, according to Weather Underground Meteorology Director Jeff Masters, who was not involved in the study.

And there's an 80 per cent chance that the killer Russian heat wave of 2010 would not have happened without the added push of global warming, according to a study published last week in the Proceedings of the National Academy of Sciences.

Scientists expect future hurricanes and other tropical cyclones to have stronger winds, but they won't increase in number and may actually decrease.

And global warming isn't the sole villain in future climate disasters, the climate report says. An even bigger problem will be the number of people -- especially the poor -- who live in harm's way.

University of Victoria climate scientist Andrew Weaver, who was not among the authors, said the report was written to be "so bland" that it may not matter to world leaders.

But Masters said the basic findings seem to be proven true by actual events.

"In the U.S., this has been the weirdest weather year we've had for my 30 years, hands down."