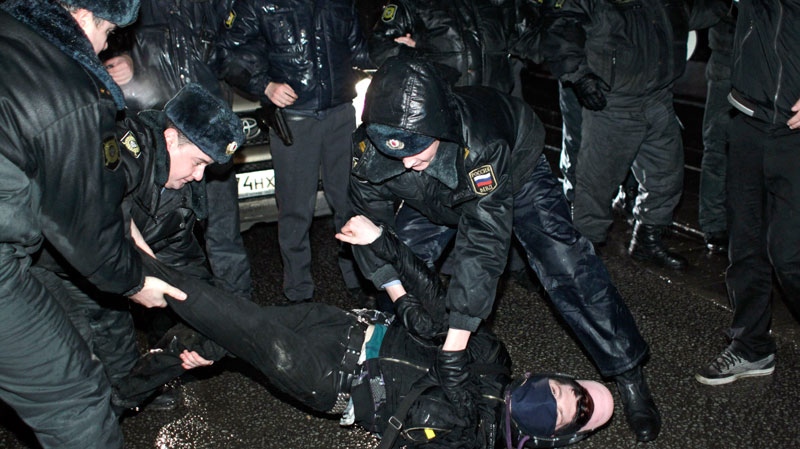 MOSCOW - Several thousand people protested Monday night against Prime Minister Vladimir Putin and his party, which won the largest share of a parliamentary election that observers said was rigged.

It was perhaps the largest opposition rally in years and ended with police detaining some of the activists. A group of several hundred marched toward the Central Elections Commission near the Kremlin, but were stopped by riot police and taken away in buses. The total number of those detained was not immediately available.

Estimates of the number of protesters at the rally ranged from 5,000 to 10,000. They chanted "Russia without Putin" and accused his United Russia party of stealing votes.

United Russia took about 50 per cent of Sunday's vote, a result that opposition politicians and election monitors said was inflated because of ballot stuffing and other vote fraud. It was a significant drop from the last election, when the party took 64 per cent.

Pragmatically, the loss of seats in parliament appears to mean little; two of the three other parties winning seats have been reliable supporters of government legislation. But, it is a substantial symbolic blow to a party that had become virtually indistinguishable from the state itself.

It has also energized the opposition and poses a humbling challenge to the country's dominant figure in his drive to return to the presidency. Putin, who became prime minister in 2008 because of presidential term limits, will run for a third term in March and some opposition leaders saw the parliamentary election as a game-changer for what had been presumed to be Putin's easy stroll back to the Kremlin.

Also Monday, more than 400 Communist supporters gathered to express their indignation over the election, which some called the dirtiest in modern Russian history. The Communist Party finished second with about 20 per cent of the vote.

"Even compared to the 2007 elections, violations by the authorities and the government bodies that actually control the work of all election organizations at all levels, from local to central, were so obvious and so brazen," said Yevgeny Dorovin, a member of the party's central committee.

Putin appeared subdued and glum even as he insisted at a Cabinet meeting Monday that the result "gives United Russia the possibility to work calmly and smoothly."

Although the sharp decline for United Russia could lead Putin and the party to try to portray the election as genuinely democratic, the wide reports of violations have undermined that attempt at spin.

Boris Nemtsov, a prominent figure among Russia's beleaguered liberal opposition, declared that the vote spelled the end of Putin's "honeymoon" with the nation and predicted that his rule will soon "collapse like a house of cards."

"He needs to hold an honest presidential election and allow opposition candidates to register for the race, if he doesn't want to be booed from Kamchatka to Kaliningrad," Nemtsov said on Ekho Moskvy radio.

Many Russians came to despise United Russia, seeing it as the engine of endemic corruption. The election showed voters that they have power despite what election monitors called a dishonest count.

"Yesterday, it was proven by these voters that not everything was fixed, that the result really matters," said Tiny Kox of the Council of Europe's Parliamentary Assembly, part of an international election observer mission.

Other analysts suggested the vote was a wake-up call to Putin that he had lost touch with the country. In the early period of his presidency, Putin's appeal came largely from his man-of-the-people image: candid, decisive and without ostentatious tastes.

But, he seemed to lose some of the common touch, appearing in well-staged but increasingly preposterous heroic photo opportunities -- hunting a whale with a crossbow, fishing while bare-chested, and purportedly discovering ancient Greek artifacts while scuba-diving. And Russians grew angry at his apparent disregard -- and even encouragement -- of the country's corruption and massive income gap.

"People want Putin to go back to what he was in his first term -- decisive, dynamic, tough on oligarchs and sensitive to the agenda formed by society," said Sergei Markov, a prominent United Russia Duma member.

The vote "was a normal reaction of the population to the worsening social situation," once Kremlin-connected political analyst Gleb Pavlovsky was quoted as saying by the Interfax news agency.

Only seven parties were allowed to field candidates for parliament this year, while the most vocal opposition groups were barred from the race. International monitors said the election administration lacked independence, most media were biased and state authorities interfered unduly at different levels.

"To me, this election was like a game in which only some players are allowed to compete," Heidi Tagliavini, the head of the observer mission of the Organization for Security and Cooperation in Europe, said.

Tagliavini said that of the 150 polling stations where the counting was observed, "34 were assessed to be very bad."

Other than the Communist Party, the socialist Just Russia and the Liberal Democratic Party led by mercurial nationalist Vladimir Zhirinovsky are also expected to increase their representation in the Duma; both have generally voted with United Russia, and the Communists pose only token opposition.

Two liberal parties were in the running, but neither got the 7 per cent of the national vote needed to win seats. Nemtsov's People's Freedom Party, one of the most prominent liberal parties, was denied participation for alleged violations in the required 45,000 signatures the party had submitted with its registration application.

About 60 per cent of Russia's 110 million registered voters cast ballots, down from 64 per cent four years ago.

Social media were flooded with messages reporting violations. Many people reported seeing buses deliver groups of people to polling stations, with some of the buses carrying young men who looked like football fans, who often are associated with violent nationalism.

U.S. Secretary of State Hillary Rodham Clinton said the U.S. has "serious concerns" about the elections.

Russia's only independent election monitoring group, Golos, which is funded by U.S. and European grants, has come under heavy official pressure in the past week. Golos' website was incapacitated by hackers on Sunday, and its director Lilya Shibanova and her deputy had their cellphone numbers, email and social media accounts hacked.