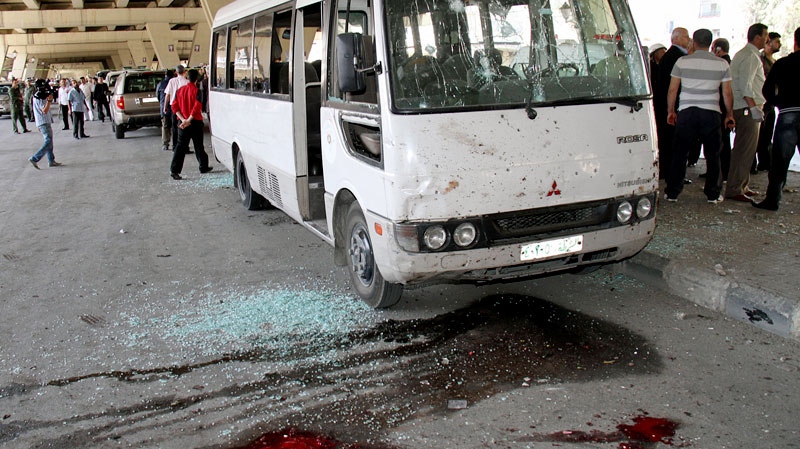 DAMASCUS, Syria - A suicide bomber blew himself up across the street from a mosque in the Syrian capital Friday, killing at least 10 people and wounding nearly 30, state TV said. Thousands of Syrians protested elsewhere to denounce persistent violence by President Bashar Assad's regime.

Three other smaller explosions also were reported in the capital, killing one person.

The violence was the latest blow to a peace plan brokered by special envoy Kofi Annan that called for a cease-fire to go into effect two weeks ago. The truce has been roundly ignored on the ground, and the UN has only 15 monitors in Syria who are trying to salvage it.

In New Delhi, UN chief Ban Ki-moon told reporters that the regime's continued repression of the civilian population "has reached an unacceptable, intolerable stage." Ban said he was "gravely alarmed" that killings continue, despite the regime's commitment to end violence and withdraw troops and tanks from population centres.

"This is in clear contravention to what the Syrian government has already agreed," Ban said.

In Damascus, Syrian TV aired footage of white smoke billowing from under a bridge as people streamed out of a mosque. The streets were stained with blood. The regime blamed the attack on "terrorists" trying to destabilize the country.

Anas Haqqi, 13, said he was walking with his father when the bomb went off. "I fell on the ground," said the boy, who was being treated for shoulder and leg wounds at Damascus' Mujtahid hospital.

An Associated Press reporter on the scene saw human flesh and hair in the street as well as a police bus that had its windows shattered. As police cordoned off the area, security agents wearing gloves collected remains from the street and piled them on a sheet.

A string of large-scale bombings in Damascus and elsewhere in recent months has added a mysterious element to the anti-government revolt. Some U.S. officials have suggested al Qaeda militants may be joining the fray after similar attacks in the past.

The regime blames the bombings on unspecified "terrorists" -- the same term it uses to describe opposition forces that it says are carrying out a foreign conspiracy.

But opposition activists deny any role in the blasts, blaming government forces for carrying out the attacks as a way to tarnish the uprising that began in March 2011.

A diplomatic push has failed to calm the crisis, and government shelling of opposition strongholds has continued as the uprising that began with largely peaceful protests has morphed into an armed insurgency in response to the brutal crackdown.

Friday's blast in the capital's Midan neighbourhood went off across the street from a mosque.

State TV reported that nine corpses were identified, and the remains of two other people also were found. One of the remains is believed to be the suicide bomber, according to Health Minister Nader al-Halqi.

Al-Halqi said at least seven of the dead were policemen.

Midan has been the site of frequent anti-government protests in the past. In January, an explosion in the same neighbourhood killed at least 26 people and wounded 63.

Al-Halqi also said two smaller explosions in Damascus hit the neighbourhoods of Zahra and Sreiji. The first killed a man and wounded his wife and son, while the other wounded three people.

Later Friday, the state-run news agency, SANA, said a fourth explosion on a road in the Adawi neighbourhood wounded two people who were in a taxi that was passing by.

The first serious explosions after the uprising began occurred on Dec. 23 when two car bombers blew themselves up outside the heavily guarded compounds of Syria's intelligence agencies, killing at least 44 people in a brazen attack on the powerful security directorates. Two weeks later, a bomb exploded at a busy Damascus intersection, killing 25 people.

Most of the big explosions targeted Damascus and Aleppo, the country's largest cities and economic powerhouses that have been relatively spared from the uprising. Both cities are tightly controlled by forces loyal to the regime.

The anti-government protests, which usually take place on Fridays across the country, typically begin following noon prayers as worshippers stream out of mosques.

On Friday, activists reported that thousands of people protested in the northern city of Aleppo, the central region of Hama and the northern province of Idlib.

An amateur video posted online Thursday showed people carrying the body of a boy said to have been shot dead by Syrian troops in the southern city of Daraa -- apparently an attempt to display the body to UN monitors nearby.

At one point some people jumped on a UN vehicle while others banged on it with their hands. Others cordoned the vehicles to protect the observers.

More observers are expected in Syrian the coming days. The UN has approved increasing the mission to 300 observers.

Annan's spokesman Ahmad Fawzi said he hopes to have 25 observers on the ground by Monday, 100 within a month of the April 12 cease-fire

The UN monitoring team's spokesman said international monitors have moved into another hot spot in Syria to try to stop the violence with two observers stationed in the southern city of Daraa, the birthplace of the uprising.