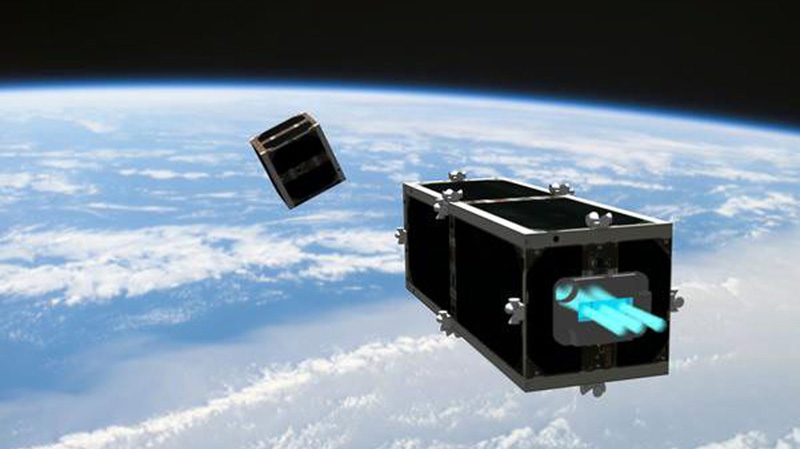 In this illustration provided by the Swiss Space Center of the Swiss Federal Institute of Technology (EPFL) on Wednesday, February 15, 2012, the CleanSpace One is chasing its target, one of the CubeSats launched by Switzerland in 2009. (AP Photo/HO/T EPFL/Swiss Space Center)

GENEVA - The tidy Swiss want to clean up space.

Swiss scientists said Wednesday they plan to launch a "janitor satellite" specially designed to get rid of space junk, the orbiting debris that can do serious and costly damage to valuable satellites or even manned space ships.

The 10-million-franc ($11-million) satellite called CleanSpace One -- the prototype for a family of such satellites -- is being built by the Swiss Space Center at the Swiss Federal Institute for Technology in Lausanne, or EPFL.

Its launch would come within three to five years and its first tasks will be to grab two Swiss satellites that were launched in 2009 and 2010 but will be phased out of use, EPFL said.

The U.S. space agency NASA says over 500,000 pieces of spent rocket stages, broken satellites and other debris are orbiting Earth. The debris travels at speeds approaching 17,500 miles per hour (28,000 kilometres per hour), fast enough to destroy or inflict expensive and time-draining damage on a satellite or spacecraft. Collisions, in turn, generate more fragments floating in space.

Space junk has collided with satellites at least twice: In 1996, a French satellite was damaged by a rocket fragment, and in 2009, a satellite owned by U.S.-based Iridium Communications was destroyed in a collision with a derelict Russian satellite.

"It has become essential to be aware of the existence of this debris and the risks that are run by its proliferation," said Claude Nicollier, an astronaut and EPFL professor.

The first hurdle has to do with trajectory: The satellite has to be able to adjust its path to match that of its target. EPFL said its labs are looking into a new ultra-compact motor that can do this.

Next, the satellite has to be able to grab hold of and stabilize the debris at high speeds. Scientists are studying how plants and animals grip things as a model for what would be used.

And, finally, CleanSpace One then has to be able to guide the debris, or unwanted satellites, back into Earth's atmosphere, where both the Swiss-made satellite and the floating garbage it collects would burn on re-entry.

The Swiss Space Center's director, Volker Gass, said it hopes to someday "offer and sell a whole family of ready-made systems, designed as sustainably as possible, that are able to de-orbit several different kinds of satellites."

It remains to be seen how cost-effective the satellites are since each one would be destroyed after its mission, but governments might provide some funding if governments agree to rules to limit debris.

In 2007, China purposely destroyed one of its own satellites with a missile in a test, putting an estimated 150,000 smaller pieces of debris into space and 3,000 big enough to be tracked by radar on the ground.

More recently, Russia's $170 million planned Mars moon probe got stranded in Earth's orbit after its Nov. 9 launch. Efforts by Russian and European Space Agency experts to bring it back to life failed. It was one of the heaviest and most toxic pieces of space junk ever to crash to Earth.

There have been no reports of anyone ever being hit by it on Earth, but the problem it poses has slowly gained traction in political circles in the decades since the space age began more than a half-century ago.

The European Union has proposed its own draft rules for operating in space and the United States views that document as a starting point.

U.S. Secretary of State Hillary Rodham Clinton warned last month of the space environment is threatened by space junk, and said the U.S. will hold talks with the EU to set informal rules aimed at limiting debris.