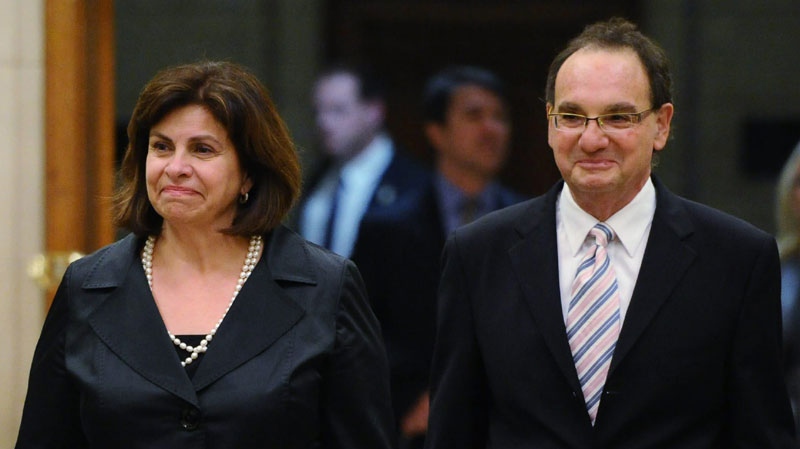 Justice Michael Moldaver and Justice Andromache Karakatsanis appear before the Ad Hoc Committee on the Appointment of Supreme Court of Canada Justices on Oct. 19, 2011

OTTAWA - One of the new nominees to the Supreme Court of Canada declared the need for judges to think carefully before touching the nation's laws or creating new ones -- a message likely to resonate with Conservatives who have complained the top court is too activist.

Justice Michael Moldaver made the remarks Wednesday to a special committee of MPs reviewing his candidacy and that of fellow nominee Andromache Karakatsanis.

"Under the rule of law, it is not our function to create laws, nor do we have the right to direct governments on matters of policy. Under the Constitution, we have been given the authority to determine the legality of laws passed by Parliament and the legislatures," said Moldaver, a former Ontario Court of Appeal judge.

"In fulfilling that role, we must never lose sight of the fact that we are being asked to strike down laws that had been enacted by a democratically elected majority of parliamentarians. The need for caution and restraint in these circumstances is self-evident, but the ramifications of our decisions must never prevent us from acting fearlessly in accordance with the mandate we have been given."

Prime Minister Stephen Harper announced the new pair of nominations on Monday. Almost immediately, there was controversy over Moldaver's inability to speak French.

The Conservatives, Liberals and NDP each had members on a panel that came up with a short-list of candidates that was unanimously approved and sent to Harper. But the NDP has been critical of Moldaver's candidacy, saying Supreme Court justices should be bilingual in order to better serve the francophone Canadians who appear before them.

Moldaver addressed the issues almost immediately in his opening remarks, first joking that his youngest brother who is a bilingual schoolteacher will be helping him out.

"I'm sorry that I have limited ability in French. That said, I have the greatest of respect for the French language, the French culture including the Civil Code tradition, the Quebecois and other French-speaking Canadians," Moldaver read in laboured French. "If my nomination is approved, I will do everything in my power in the years ahead to be more proficient in the French language."

New Democrat MP Joe Comartin asked Moldaver pointed questions about his inability to speak French. He noted that the same issues were raised when Justice Marshall Rothstein was appointed to the court in 2006.

"I heard the same commitment from him, and we all know that was five, five-and-half years ago, and Mr. Justice Rothstein is still not able to conduct any hearings in French."

Karakatsanis also addressed some of the scrutiny of her own nomination. Although she had served on both Ontario's Superior Court of Justice and the Court of Appeal in the last decade, she spent many years working as a lawyer within the Ontario government -- including as the top bureaucrat in the government of former Progressive Conservative Premier Mike Harris. Some reports suggested Karakatsanis had Conservative connections.

"I take great pride in my career as a non-partisan, professional public servant," said Karakatsanis, who speaks French and Greek as well as English.

"I'm proud of having received premier appointments from the leaders of three different political parties. During my 15 years in the Ontario public service I served with 15 ministers and four premiers. I have enormous respect for the work of elected officials and I believe deeply in our system of parliamentary democracy with the three pillars of the legislature, the executive and the judiciary."

Karakatsanis also acknowledged the supremacy of the legislative branch in creating laws, but her comments were more qualified.

"Of course, if the law violates the charter, it must be struck down. This is the role that Parliament has given to the judiciary."

Apart from the NDP, MPs were generally gentle in their questioning of the jurists. Liberal MP Irwin Cotler asked the candidates who their heroes were. Other MPs smiled as they listened to the remarks. The committee does not have a veto over the nominations to the Supreme Court -- constitutional expert Peter Hogg explained at the outset of the meeting that the main objective was to introduce Canadians to the pair and lift the veil at least partly on the process.

The would-be Supreme Court justices spent much of their opening remarks detailing their personal histories going back to their childhoods. Both grew up with modest backgrounds -- Moldaver in Peterborough, Ont., the son of a scrap-metal worker and Karakatsanis to Greek-born restaurant owners.

Moldaver joked that he hadn't been so nervous since his first speech to a jury as a defence lawyer. His voice faltered as he elegized his mother.

"She spoiled each and every one of us ... if she was still here her joy today would be unbounded."