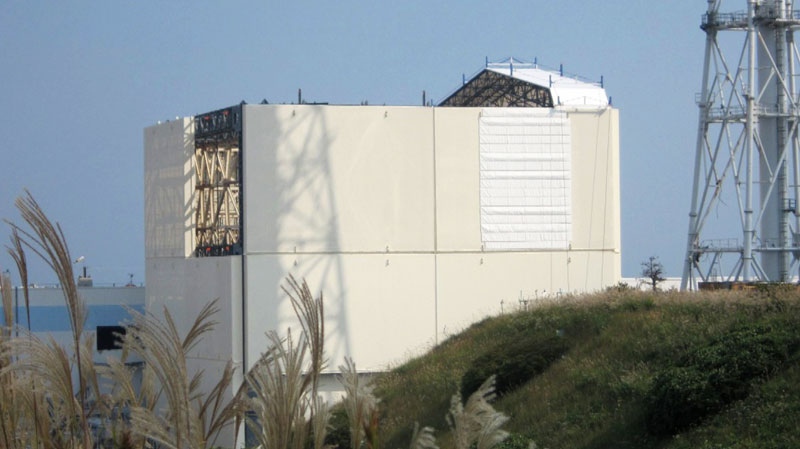 TOKYO - Radioactive debris from melted fuel rods may have seeped deeper into the floor of a Japan's tsunami-hit nuclear reactor than previously thought, to within a foot from breaching the crucial steel barrier, a new simulation showed Wednesday.

The findings will not change the ongoing efforts to stabilize the reactors more than eight months after the Fukushima Dai-ichi plant was disabled, but they harshly depict the meltdowns that occurred and conditions within the reactors, which will be off-limits for years.

The plant operator Tokyo Electric Power Co. said its latest simulation showed fuel at the No. 1 reactor may have eroded part of the primary containment vessel's thick concrete floor. The vessel is a beaker-shaped steel container, set into the floor. A concrete foundation below that is the last manmade barrier before earth.

The fuel came within a foot of the container's steel bottom in the worst-case scenario but has been somewhat cooled, TEPCO's nuclear safety official Yoshihiro Oyama said at a government workshop. He said fuel rods in the No. 1 reactor were the worst damaged because it lost cooling capacity before the other two reactors, leaving its rods dry and overheated for hours before water was pumped in.

The nuclear crisis following the March 11 earthquake and tsunami caused massive radiation leaks and the relocation of some 100,000 people.

Another simulation on the structure released by the government-funded Japan Nuclear Energy Safety Organization, or JNES, said the erosion of the concrete could be deeper and the possibility of structural damage to the reactor's foundation needs to be studied.

JNES official Masanori Naito said the melting fuel rods lost their shape as they collapsed to the bottom of the vessel, then deteriorated into drops when water pumping resumed, and the fuel drops spattered and smashed against the concrete as they fell, Naito said.

TEPCO and government officials are aiming to achieve "cold shutdown" by the end of the year -- a first step toward creating a stable enough environment for work to proceed on removing the reactors' nuclear fuel and closing the plant altogether.

The government estimates it will take 30 years or more to safely decommission Fukushima Dai-ichi.

Wednesday's simulations depict what happened early in the crisis and do not mean a recent deterioration of the No. 1 reactor. Oyama said, however, the results are based only on available data and may not match the actual conditions inside the reactors, which cannot be opened for years.

Some experts have raised questions about achieving the "cold shutdown," which means bringing the temperature of the pressure vessel containing healthy fuel rods to way below the benchmark 100 Celsius. They say the fuel is no longer there and measuring the temperature of empty cores is meaningless, while nobody knows where and how hot the melted fuel really is.

Kiyoharu Abe, a nuclear expert at JNES, said it's too early to make a conclusion and more simulations should be done to get accurate estimates.

"I don't think the simulation today was wrong, but we should look at this from various viewpoints rather than making a conclusion from one simulation," Abe said. "It's just the beginning of a long process."