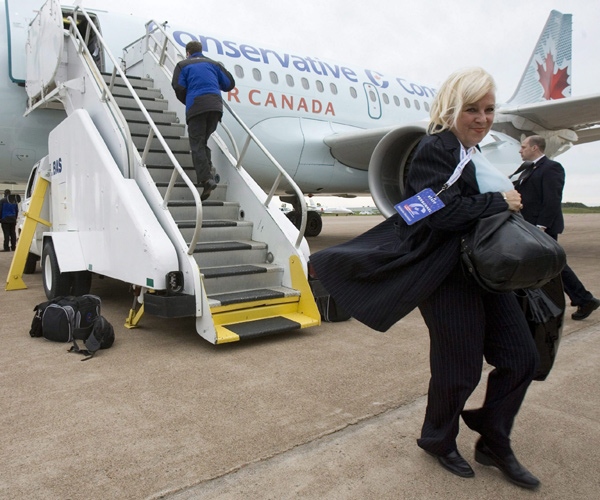 OTTAWA - A debate over opening the shutters on MP expenses and letting the auditor general peek in has already produced one ray of sunshine.

It turns out the personal stylist employed by Prime Minister Stephen Harper to primp him for public appearances is now on the payroll of the Conservative party, not taxpayers.

How Michelle Muntean's full-time salary is paid has been a closely guarded secret by the Prime Minister's Office since Harper came to power in 2006.

But as parliamentarians defended a decision last week to stop Auditor General Sheila Fraser from looking into their expense accounts, some questioned whether such an audit would finally solve the mystery of Harper's personal groomer.

The open speculation smoked out an answer.

A senior government source told The Canadian Press that the personable stylist is not paid from Harper's MP budget or by the Prime Minister's Office, but rather by the Conservative Party of Canada.

"We just don't talk about personnel matters, but off the record, she's paid by the party," said the source.

Muntean used to be on the public payroll, the source confirmed, but her salary was transferred to the Conservative party books sometime since 2007.

"I don't know why, but it's changed," said the source.

As for her extensive travel expenses, government sources have always maintained they're paid by the party.

Then, as now, no one in the Prime Minister's Office would go on the record about Muntean's salary and expenses -- meaning no one can be held accountable for statements made to the media that turn out to be false or misleading.

A government source confirmed that taxpayers pay for Muntean's hotel and airfare when she travels with Harper, but the party covers all her incidental expenses.

News organizations pay thousands of dollars per person to be included on each of these trips.

Canadians still don't know how much Muntean was paid by taxpayers, or what mechanism was used. Access to Information Act requests revealed no contracts, and official inquiries by the NDP in the House of Commons came up empty.

When the stylist's employment first became public knowledge, the then-head of the Canadian Taxpayers' Federation said it was incumbent on the government to make it clear how she was paid.

"The idea that these expenses are going to be run up on the public tab and then answers aren't going to be forthcoming about how much it's costing is unacceptable from a taxpayer's point of view," John Williamson said in April 2007.

Williamson recently resigned, after serving a short stint as Harper's fourth director of communications, to seek a Conservative party nomination in New Brunswick.

Muntean assists Harper with everything from co-ordinating his suits and ties to picking lint off his jackets and overseeing his makeup and his hair for major speeches and TV appearances. She's a former makeup artist with CBC and CTV who started working with Harper during the Conservative leadership race.

Having a full-time personal groomer who travels the globe with the prime minister is a new development in federal politics. Harper is the first leader to employ such a primper on staff, an odd juxtaposition given the guy-next-door, hockey-dad persona the prime minister likes to cultivate.

And as a Reform MP, Harper publicly rebuked Preston Manning for not disclosing how much the party paid for his leader's wardrobe allowance. Manning subsequently disclosed $31,000, but the party infighting left lasting wounds.

Most recently, Muntean accompanied Harper to Belgium, Holland, Croatia and Germany during a week-long European trip earlier this month.