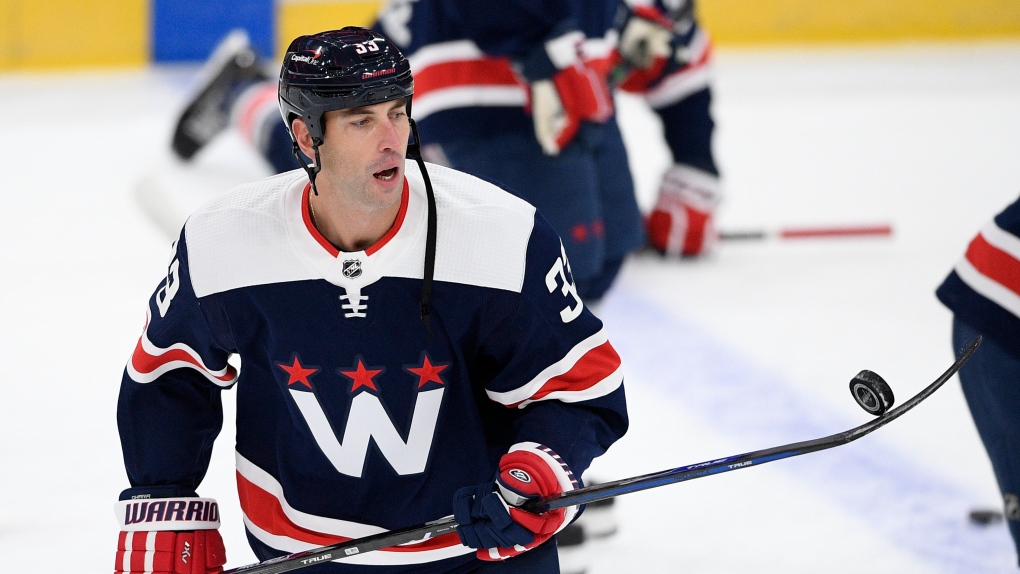 Washington Capitals defenceman Zdeno Chara juggles the puck as he warms up before an NHL hockey game against the New York Islanders, Jan. 26, 2021, in Washington. (AP Photo/Nick Wass)

Zdeno Chara pondered his future, talked to his family and decided a blast from his past was the right choice for where to play a 24th NHL season.

Chara agreed to terms with the New York Islanders on a one-year deal Saturday, returning 25 years later to the organization that drafted him, to chase the Stanley Cup one more time at age 44.

"It's kind of full circle," Chara said. "Who would know that this would kind of work out the way it did after 20-some years?"

It worked out with the Islanders after Chara ultimately decided not to hang up his skates and picked them over other interested teams. Playing on Long Island allows Chara to be somewhat close to his family in Boston and contribute for a contender that has been on the verge of reaching the final the past two playoffs.

"It's a very solid group with strong leadership and strong core players that have been part of the Islanders for a long time," Chara said. "It's a well-structured and cultured team now, and for sure they've been making a lot of noise around the league."

Chara was a third-round pick of the Islanders in 1996 and made his debut with them the next year before being traded to Ottawa in 2001. He still feels grateful for that opportunity.

"It was my first team, my first NHL experiences," Chara said. "We were going through some different phases at that time, but I learned a lot from that."

The big Slovak defenceman will look to win the Cup again just over a decade since hoisting it as Boston's captain. The Bruins let their longtime captain leave in free agency last fall following 14 seasons, and Chara went to Washington to play for a year with the Capitals.

Chara showed he still had gas in the tank by averaging more than 18 minutes a night and playing 55 of the 56 games on the condensed, shortened schedule. By continuing his career, Chara could play in the Olympics for the fourth time, but he said training camp and the NHL season are his focus, not the chance to go to Beijing.

But what actually persuaded him to keep playing?

Far removed from winning the Norris Trophy in 2009, Chara gives New York valuable veteran depth on the left side of the blue line. The Islanders reached the semifinals each of the past two seasons, losing both times to eventual champion Tampa Bay.

It has been a summer of deft salary cap management by 78-year-old general manager Lou Lamoriello, who traded Nick Leddy to Detroit for Richard Panik, added Zach Parise after his buyout by Minnesota and re-signed Kyle Palmieri, Anthony Beauvillier, Casey Cizikas and Adam Pelech.

The Islanders start the season on a 13-game road trip before opening their sparkling new arena at Belmont Park in November. Assuming Chara is in the lineup for at least one home game and plays at Seattle during the Kraken's inaugural season, those arenas will be the 43rd and 44th different NHL arenas he has played a game in.

Chara still has a few jerseys from his first stint with the Islanders, a different era under previous ownership, and knows the franchise has taken major steps since. Coming full circle allows him to experience those changes firsthand and try to bring the Cup back to Long Island for the first time since the early 1980s glory days as the only player on the roster who was alive then.

"You never know how your career will evolve and how it will end up, but obviously nobody can really imagine to be kind of finishing where they start," Chara said. "It just worked out that way, and I'm glad it did."

The federal government has announced a suite of changes to the popular income and business support programs put in place during the pandemic and set to expire on Saturday. Deputy Prime Minister and Finance Minister Chrystia Freeland reminded Canadians on Thursday that the measures were always intended to be 'temporary.'

Instead of issuing a singular federal national COVID-19 vaccine passport, the federal government says that each province and territory will be responsible for issuing a 'standardized pan-Canadian' vaccine passport that Canadians can use when travelling. Each province's system is supposed to have a 'common' look and feel, with the expectation that by next month all Canadians will have access.

The U.S. House voted Thursday to hold Steve Bannon, a longtime ally and aide to former U.S. president Donald Trump, in contempt of Congress for defying a subpoena from the committee investigating the violent Jan. 6 Capitol insurrection.

As he prepares to launch a new media company that will give him his own social media platform, former U.S. President Donald Trump has ramped up his efforts to rewrite history, spreading more lies about the 2020 election in November and the deadly storming of the Capitol in January.

A police superintendent in Jamaica told The Associated Press on Thursday that authorities have arrested a Colombian man they believe is a suspect in the July 7 assassination of Haitian President Jovenel Moise.

As tourism resumes across much of the world, experts say purchasing travel insurance is necessary if Canadians want to stay safe and enjoy a trip abroad.