'You can't Google how to handle a pandemic': NHL teams adapting as protocols change 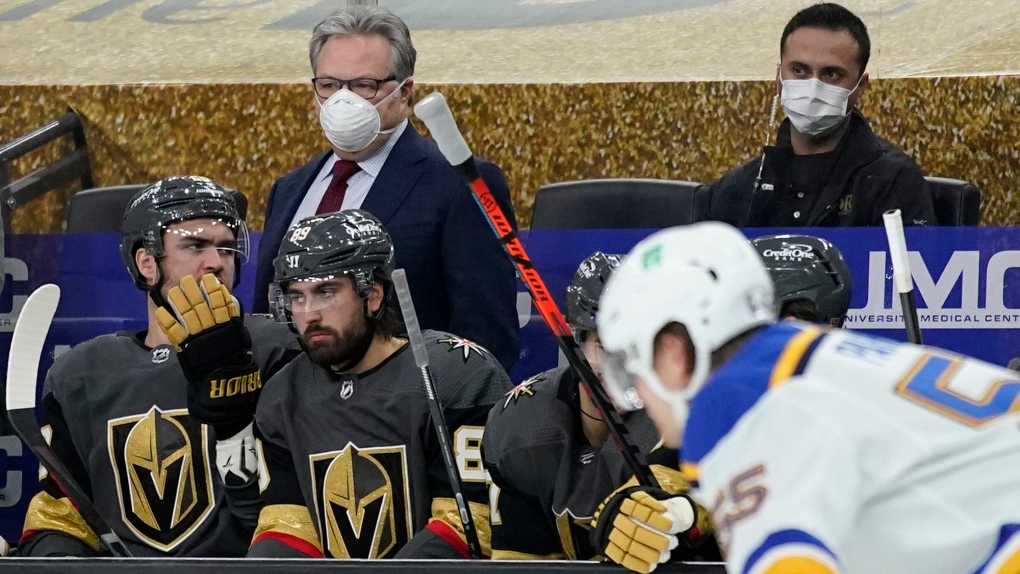 Jason Spezza says the Toronto Maple Leafs had conversations -- physically distanced, of course -- at the start of training camp to discuss the uncertainty of what lay ahead.

The NHL began its 56-game season last month with 213 pages of protocols aimed at trying to keep COVID-19 out of locker rooms with masks, daily tests and a grocery list of rules.

There was, however, little doubt positive cases would arise.

The league reserved the right to change and update its health and safety measures, and with dozens of games already postponed for the league's 24 U.S.-based clubs as the coronavirus insidiously cut across a number of rosters, those plans were strengthened twice in the last two weeks.

Players and coaches were briefly instructed to arrive at arenas no earlier than one hour 45 minutes prior to games before receiving pushback amid concerns about the compressed time frame. That's become more of a recommendation, but clubs are now also expected hold meetings virtually, alter locker rooms to allow for appropriate distancing -- in Toronto, for example, the Leafs and visiting teams are both using extra adjacent change rooms -- while glass has been removed from the benches to increase air flow.

"(Leafs head coach Sheldon Keefe) talked to us about how there's going to be curveballs," Spezza added. "We're not going to agree with all of them, but the biggest thing is to have compliance and make your routine around it.

"We're just fortunate we get a chance to play."

Showing up on the list doesn't necessarily mean an individual has tested positive. Players can go into protocol for unconfirmed results, if they're deemed a close contact of a positive case, or if a quarantine is required.

As for Canadian clubs, eight players -- three from the Winnipeg Jets, three from the Edmonton Oilers and two from the Vancouver Canucks -- had appeared on the COVID-19 list as of Saturday evening.

The NHL further enhanced measures Thursday, adding rapid testing for American teams, requiring players and staff to stay home except for practices, games or essential activities, and strongly recommending the use of KN95 face masks, which are considered more effective in reducing coronavirus spread.

"These are unique circumstances," New York Rangers head coach David Quinn said. "You can't Google how to handle a pandemic. We're all learning as we go. I think the league has done a great job adapting.

"Every league has experienced some sort of spike, and we're no different. We just have to keep adapting and support the league in what they want to do. We all want to continue to play."

Toronto captain John Tavares said NHLers are mostly on board with the measures, but the short-lived rule about arriving less than two hours before games was an annoyance that resulted in unintended consequences.

"We're still trying to be mindful of that (advice)," he said. "But playing at this level and what it takes to prepare, and what you're competing for and what's at stake, guys need the proper amount of time.

"Trying to fix one issue -- being around each other for a long period of time -- which obviously we're trying to limit, when we condense the time, sometimes it crowds guys into one or two areas because we're trying to do the same type of things at the same time to get ready."

"With the safety protocols, they're going to be evaluating things daily," he said. "If (the league) feels like they've got to implement new structures into the system then we're going to have to abide by that and find a way to stick with it and keep playing."

Keefe said because of the setup at Toronto's practice facility, masked players and coaches have avoided some virtual meetings in a large space that allows for physical distancing.

"Those have been really helpful for us to have that, and help spread the message that we want and have it be in person," he said. "There's constant adjustments with everything that we're doing."

Montreal Canadiens head coach Claude Julien, meanwhile, sounded a bit like a teacher navigating online learning with students when it came to his team's sessions.

"It is very difficult," he said. "Obviously you're going to run into some players who say, 'My internet wasn't working well at home.' The biggest thing here is we're doing the best we can, and that's all the league is asking us to do."

Quinn said even when technology is working, the challenge for coaches is getting messages across through computer screens.

"You want to look your team in the eye, you want people together, you want to continue to create that team unity and have that one feel," he said following a recent morning skate. "We actually just had our penalty kill meeting, and we did it virtually even though we're all in the same building."

Already largely barred from hanging out off the ice unless cooped up in hotels on the road, Tavares said multiple locker rooms and online meetings have been a further adjustment to an already weird season.

"It takes away from some of the feel and the buildup of a game day," he said. "Even the feel you get when you have a meeting with everyone when things are being talked about -- especially the intensity and the importance of it all. It just is what it is. In the big picture, we're very fortunate to be playing.

"It's just adjusting on the fly and getting your mindset right, and dealing with those challenges as they come, and just try to be as positive as you can."

Spezza said discussions the Leafs had at camp last month -- and the chats held across the league -- were no different than the session he and his wife called with their four daughters about virtual learning.

"We had the same meeting at the start of the school year as Keefer had with us," the 37-year-old joked. "The first couple days of online learning is always difficult, but now they're into a nice routine and I get shushed all the time. The only time we see them during the day is if the Wi-Fi goes down.

"My girls have adapted."

Dad, his teammates and the rest of the NHL is trying to do the same.

This report by The Canadian Press was first published Feb. 14, 2021.