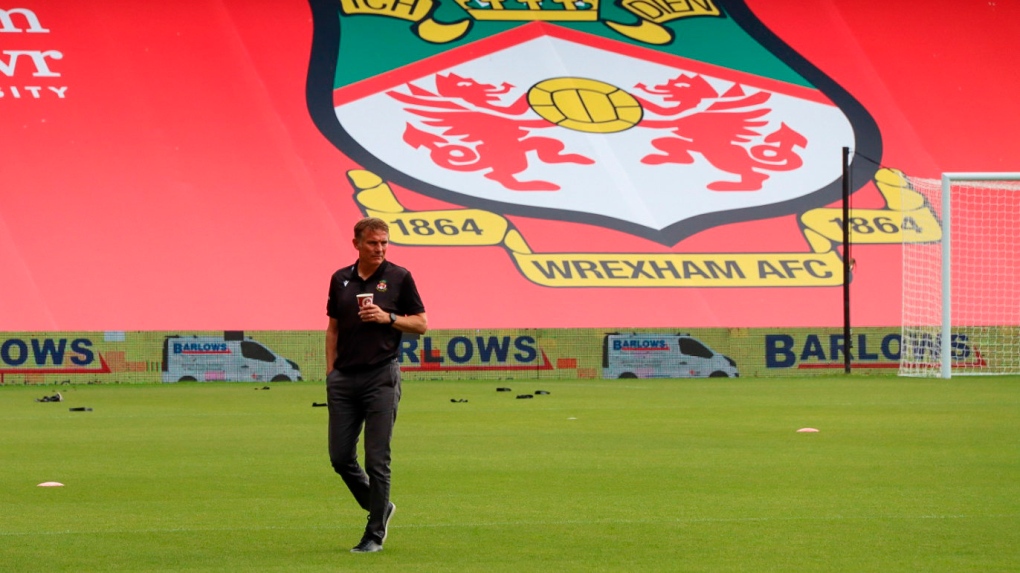 In this photo provided by Wrexham FC, Wrexham manager Phil Parkinson is seen in front of the new Kop banner the Racecourse Ground in Wrexham, Wales, Saturday, Sept. 18, 2021. (Gemma Thomas/Wrexham FC via AP)

Welsh soccer club Wrexham's Hollywood star co-owners Rob McElhenney and Ryan Reynolds turned up to watch their new team for the first time at Maidenhead United on Tuesday but there was no happy ending as the Red Devils lost 3-2.

Reynolds, the star of superhero comedy movie "Deadpool," and McElhenney, the creator of TV series "It's Always Sunny in Philadelphia," bought the club in February from the supporters who had owned the English National League (fifth-tier) outfit.

The stars brought the drama with them as their side fell two goals behind after 22 minutes before having a player sent off.

A comeback worthy of the big screen looked to be on the cards as Wrexham fought back to level the score but Maidenhead's Josh Kelly got a late winner to spoil the occasion for the visiting celebrity owners.

"They flew in today and they were trying to keep a low profile but I imagine it's fairly difficult to be low profile and they let us get on with it," Wrexham manager Phil Parkinson was quoted as saying by the BBC.

"I'm really disappointed for them that we haven't been able to come away with at least a draw. But that's football. It can be a brutal industry."

Wrexham were relegated from the English Football League (EFL) in 2008 and are currently 11th in the National League, one division below the EFL's League Two. (Reporting by Peter Hall; Editing by Ken Ferris)