Woods says a return to the top not a 'realistic expectation' 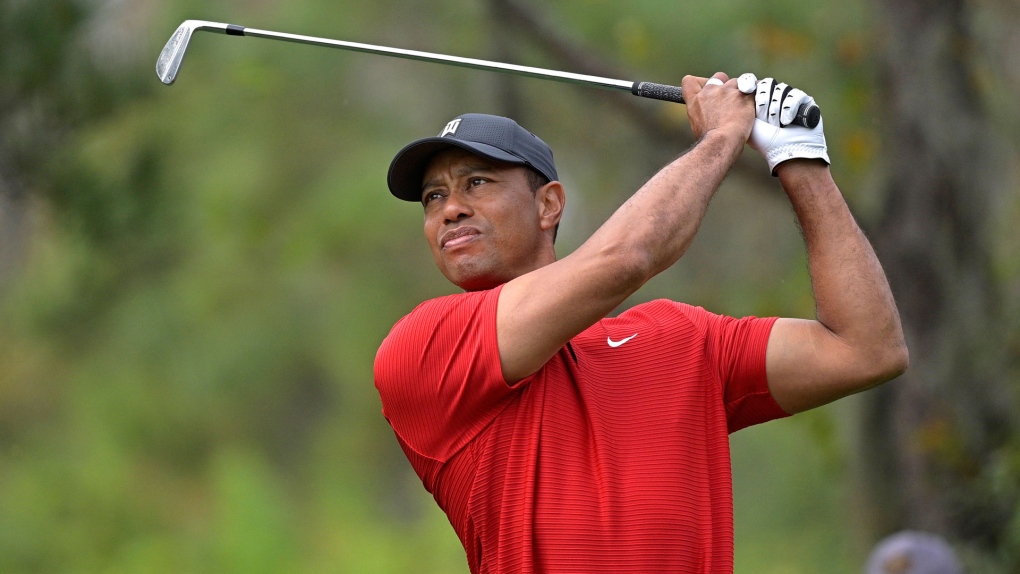 Tiger Woods watches his tee shot on the fourth hole during the final round of the PNC Championship golf tournament in Orlando, Fla., on Dec. 20, 2020. (AP / Phelan M. Ebenhack, File)
NASSAU, Bahamas -

Tiger Woods says he expects to play golf again, just not very often, and he doesn't see himself reaching the top of the sport again because "I don't think that's a realistic expectation of me."

He says he can see himself picking certain tournaments to play, but not a full-time schedule.

His extensive video interview with Golf Digest, with whom he has a financial relationship, was published Monday ahead of his first press conference since his right leg was badly damaged in a Feb. 23 car crash in the Los Angeles suburbs.

Woods is the tournament host of the Hero World Challenge.

The 15-time major champion raised hopes of another comeback when Woods posted a three-second video hitting a short iron with the message, "Making progress."

He didn't make it sound as though a return was around the corner.

"I have so far to go," he said. "I'm not even at the halfway point. I have so much more muscle development and nerve development that I have to do in my leg. At the same time, as you know, I've had five back operations. So I'm having to deal with that. So as the leg gets stronger, sometimes the back may act up."

Woods was recovering from another back procedure at the start of the year when he ran his SUV over a median and it toppled down a steep hill on a winding, sweeping road in the Los Angeles suburbs on his way to a television shoot at a golf course.

Doctors said he shattered tibia and fibula bones in his right leg in multiple locations. Those were stabilized by a rod in the tibia. A combination of screws and pins were used to stabilize additional injuries in the ankle and foot.

He last played at the PNC Championship with his son, Charlie, and then had a fifth back procedure that kept him out the early part of the year before the accident.

Woods already had one remarkable comeback, winning the Masters in 2019 after fusion surgery, his fourth on his lower back. He won the Zozo Championship in Japan later in the year for his 82nd career victory on the PGA Tour, tying Sam Snead for the all-time record.

"I don't have to compete and play against the best players in the world to have a great life. After my back fusion, I had to climb Mt. Everest one more time. I had to do it, and I did. This time around, I don't think I'll have the body to climb Mt. Everest, and that's OK. I can still participate in the game of golf. I can still, if my leg gets OK, I can still click off a tournament here or there.

"But as far as climbing the mountain again and getting all the way to the top, I don't think that's a realistic expectation of me."

Woods is to be inducted into the World Golf Hall of Fame in March. The Masters is the first full week of April. Woods didn't have a timetable, only that he wished the recovery was going faster than it was.

He said he could envision a career like Ben Hogan after his near-fatal car accident. Hogan played a limited schedule, though he still dominated the majors, including winning all three that he played in 1953.

"I think something that is realistic is playing the tour one day -- never full-time ever again -- but pick and choose, just like Mr. Hogan did. Pick and choose a few events a year and you play around that," he said.

"I think that's how I'm going to have to play it from now on," he said. "It's an unfortunate reality, but it's my reality. And I understand it, and I accept it."