Which NHL coaches and GMs could find themselves on the hot seat this season? 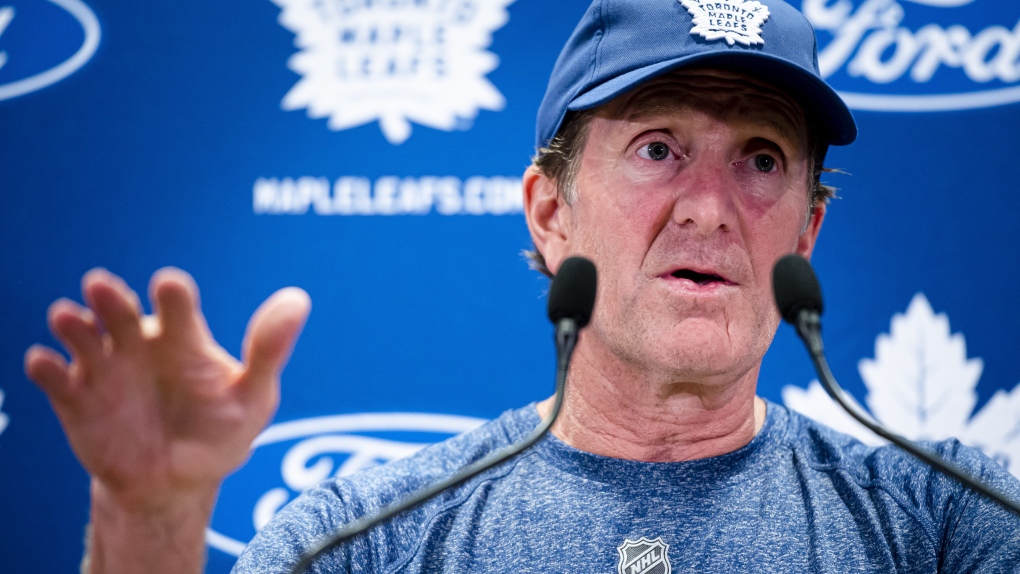 Toronto Maple Leafs head coach Mike Babcock acknowledged on the first day of training camp his seat could be a little warmer this season.

The Canadian Press takes a look at which coaches and GMs could find themselves in the crosshairs in 2019-20.

The Leafs surprised even themselves by making the playoffs in Babcock's second season in charge back in 2016-17. But after two straight seven-game losses in the first round to the Boston Bruins, the temperature has been turned up. With the likes of Auston Matthews, Mitch Marner and John Tavares up front, Morgan Rielly and Tyson Barrie on the blue line, and Frederik Andersen in goal, simply getting to the playoffs is no longer good enough. Babcock is in the middle of an eight-year, US$50-million contract he signed in 2015 -- long before current Leafs GM Kyle Dubas took charge. The old-school Babcock and analytics-driven Dubas say they have a good working relationship, but it will be interesting to see if that holds should the Leafs stumble.

The GM of the Montreal Canadiens watched his team get agonizingly close to a playoff return last season, missing out on the final wild-card spot in the Eastern Conference by two points. Montreal has advanced to the playoffs in four of Bergevin's seven seasons in charge, but a third straight absence could be the last straw in a market that demands excellence. Bergevin tried to make a splash this summer by signing restricted free agent centre Sebastian Aho to an offer sheet, but was criticized for not going far enough in terms of dollar value or length after the Carolina Hurricanes made it immediately clear they would match the deal and keep their player.

Heading into his sixth season as GM of the Vancouver Canucks, Benning is looking to make the playoffs for the first time since his inaugural year in charge back in 2014-15. Vancouver has a good stable of young talent -- including Elias Pettersson and Brock Boeser -- drafted by Benning, but he's swung and missed on a number of free-agent signings during his tenure. Benning recently inked a three-year contract extension through the 2022-23 season, but Canucks owner Francesco Aquilini hasn't been shy to drop the axe on an underperforming coach or GM in the past.

The Winnipeg Jets made it all the way to the Western Conference final in 2017-18 and had big expectations heading into last season. But they faded down the stretch before getting bounced by the St. Louis Blues, who would go on to win the Stanley Cup, in the first round of the playoffs. Maurice will have a much different look on the blue line this season after Jacob Trouba was traded and Tyler Myers left in free agency. Add the uncertain future of fellow defenceman Dustin Byfuglien, and the fact RFA forwards Patrik Laine and Kyle Connor remain unsigned, and things could unravel quickly in Winnipeg.

It would have been borderline ludicrous to include Cooper's name here at this time last season -- or even last spring -- but that was before the record-setting Tampa Bay Lightning were stunningly swept by the Columbus Blue Jackets in the opening round of the playoffs. Cooper guided Tampa to its first-ever Presidents' Trophy and tied the 1995-96 Detroit Red Wings for the most wins in a season with 62, but his players couldn't match the intensity of a team that had been fighting for its life down the stretch. The Lightning are coming off back-to-back Atlantic Division titles and should be at or near the top of the regular-season standings again in 2019-20. Tampa has made the Stanley Cup final once (2015) and conference final twice (2016, 2018) under Cooper. He signed a multi-year contract extension in March, but what happens if the Lightning once again disappoint come playoff time?

The head coach of the Detroit Red Wings made the playoffs as a rookie bench boss after Babcock left for Toronto, but hasn't sniffed the post-season since. Detroit has failed to reach 80 points in each of the last three campaigns after making the playoffs in 25 straight seasons. Blashill signed a two-year contract extension with the rebuilding Red Wings in April, but that was before Steve Yzerman took over as GM.