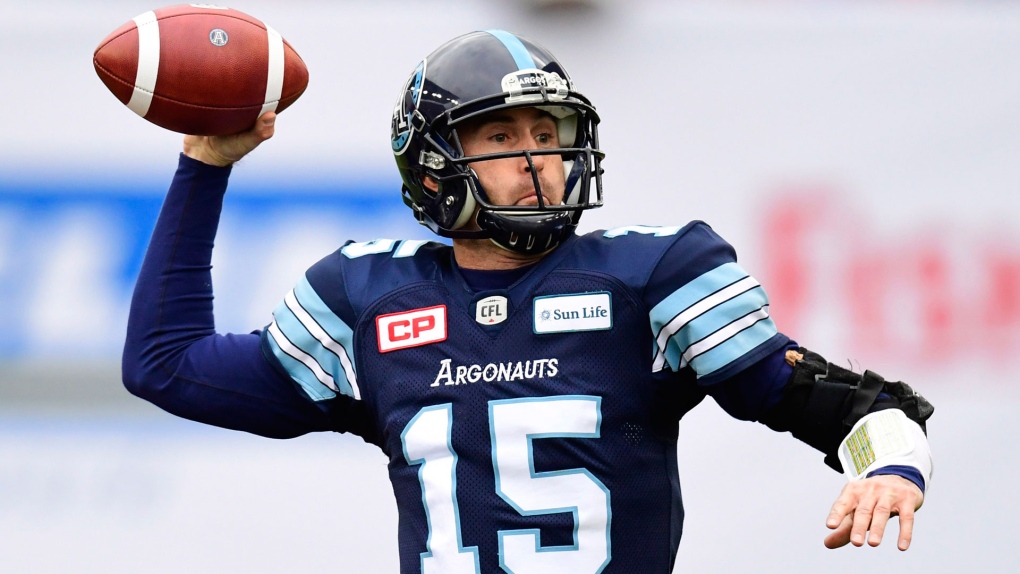 TORONTO -- For two years, the athlete in Ricky Ray effectively suppressed the practicality of retirement.

This time, Ray's practical side won out.

The Toronto Argonauts' veteran quarterback retired Wednesday. The decision wasn't surprising as the 39-year-old was coming off a season-ending neck injury.

Ray spent 17 seasons in pro football, 16 in the CFL. He won a record four Grey Cups as a starting QB.

"The more I thought about it, physically I just don't think I can perform at a standard necessary to play anymore," Ray said during a conference call. "Every time I had that competitor inside of me saying, 'Hey you can still do it, there's a lot left to accomplish. I just had the practical voice in my head saying, 'Physically you just can't do it anymore.'

"As an athlete you're always trying to overcome something or trying to push yourself and think you can do things that maybe even you don't think you can. This off-season, the practical side of me just kept coming out and saying it was my time to be done with football."

Ray's decision capped yet another off-season of reflection for the California native. Prior to the 2017 and '18 campaigns, Ray took time to ponder his football future before deciding to continue playing.

But serious questions regarding Ray's future arose moments after he left BMO Field on a stretcher with his head immobilized in the third quarter of Toronto's 41-7 home loss to the Calgary Stampeders on June 23. The six-foot-three, 215-pound Ray eventually returned and attended team meetings but never gained medical clearance to resume playing.

"Once I got that injury and knew I was going to be done (for the season) and started thinking about what was going to happen for my future, I think it just kind of kept getting stronger and stronger," he said.

Ray has no immediate plans, other than to watch a Toronto home game and visit with Edmonton head coach Jason Maas, a former Eskimos teammate and longtime friend. Ray said coaching might be in his future.

"It could be," he said. "I just needed a bit of a breather and kind of let my career sink in before I'd dive back into football and get into coaching.

"I'll probably make that decision over the next year."

Making the announcement via conference call was hardly befitting a player of Ray's stature. However, Ray said it was his decision.

"When I called Jim (Argos GM Jim Popp) and told him I was ready to make an announcement, he told me they'd do anything I wanted," Ray said. "I wanted to come to a game and bring my family and really didn't want to make a trip there, do this and then turn around and make another trip.

"For me, getting it done . . . and putting it behind me a little bit, I felt the best way to do that was with a conference call."

Ray and his family will attend Toronto's home opener June 22 versus the Hamilton Tiger-Cats. The Argos will formally honour him then.

The conference-call format was a bit of a match for Ray's low-key, humble demeanour.

Ray entered the CFL with little fanfare, earning the nickname of "Frito Ray," because he worked as a delivery driver for Frito-Lay chips before attending Edmonton's camp in 2002. After starting the year third on the depth chart, Ray replaced an injured Maas and promptly led the Eskimos to a Grey Cup berth.

While in Toronto, Ray often rode the GO train from Mississauga, Ont., to either Rogers Centre or BMO Field for Argos games, Afterwards, he'd drive home with his wife and two young daughters.

"I'm going to miss that," Ray said with a chuckle. "It was just a good, relaxing way to get into the game.

"I remember when I played in Edmonton, just driving to the games was always stressful with traffic. Just being able to ride the GO train in Toronto, put my headphones on and stare out the window was a time I really enjoyed."

Ray leaves as one of the CFL's most prolific passers.

He's second in career passing percentage (68.16 per cent), behind only Edmonton's Trevor Harris (70.36). Ray also stands fourth in passing yards (60,736), joining Anthony Calvillo, Damon Allen and Henry Burris as the only players to reach that plateau.

"You're an all-time legend," Popp told Ray on the call. "As much as you're that, you're just an absolute humble person, you might be the most humble star I've ever been around.

"It's always sad to see the player on the field leave but the legend will never stop. Your day is coming for the Hall of Fame."

Ray was a model of consistency to start his CFL career, making at least 16 regular-season starts in seven of his nine years with Edmonton. He led the Eskimos to Grey Cup titles in 2003 and '05.

Ray spent the '04 season with the NFL's New York Jets before returning to Edmonton the following year. He was the Eskimos' top player four times and the East Division's outstanding player three times.

Toronto acquired Ray from Edmonton prior to the '12 season. He paid immediate dividends, leading the Argos past the Calgary Stampeders 35-22 before a Rogers Centre sellout of 53,208 in the 100th Grey Cup game.

There'd be another championship in 2017 but also plenty of injuries. Ray appeared in 72-of-126 regular-season games over seven years in Toronto.

On the field, Ray was always stoic and meticulously dissected opposing defences with sharp, pinpoint passes. But he also had another side.

"He's hilarious," former Argos running back Brandon Whitaker said of Ray in 2016. "He's one of the top-five funniest people I've ever met.

"You'd never know that because of who he is but when he actually cracks a joke you're like, 'You've got to be kidding? I can't believe you said that."'

"He made a huge splash when he got into the CFL . . . he really took it by storm," said Calvillo, now the University of Montreal's assistant head coach. "Every quarterback has their journey and for him it clicked right away with the great Edmonton Eskimos he was playing with.

"And that's what was so impressive, just how calm, cool and collected he was and how many big throws he made during his career."

Calvillo served as Toronto's quarterback coach in 2018. Although Ray's season was cut short by injury, Calvillo said Ray served as a role model for younger players to follow.

"I was just so impressed with his vision, which is exactly what I envisioned," Calvillo said. "It's a great learning tool for young quarterbacks because they get a chance to see 1) his vision 2) his study habits and 3) and what it really takes to be a consistent quarterback.

"It was exciting because you hear about the hard work every experienced quarterback does and to be part of it and see it was very impressive."

Ray hopes he'll be always be remembered as a player teammates and fans could believe in.

"When people ask me, 'Do you have fun playing football?' I'm not sure fun is the right word," he said. "Rewarding is more the right word because it's not fun all the time.

"There's a lot of hard practices, a lot of injuries, a lot of tough losses, a lot of things that can beat you down a bit. But when you do get on top and do get to win . . . it's just so rewarding. That's what filled me throughout my career, those times of having success with your teammates and team."

Ricky Ray retires from the CFL after 16 seasons