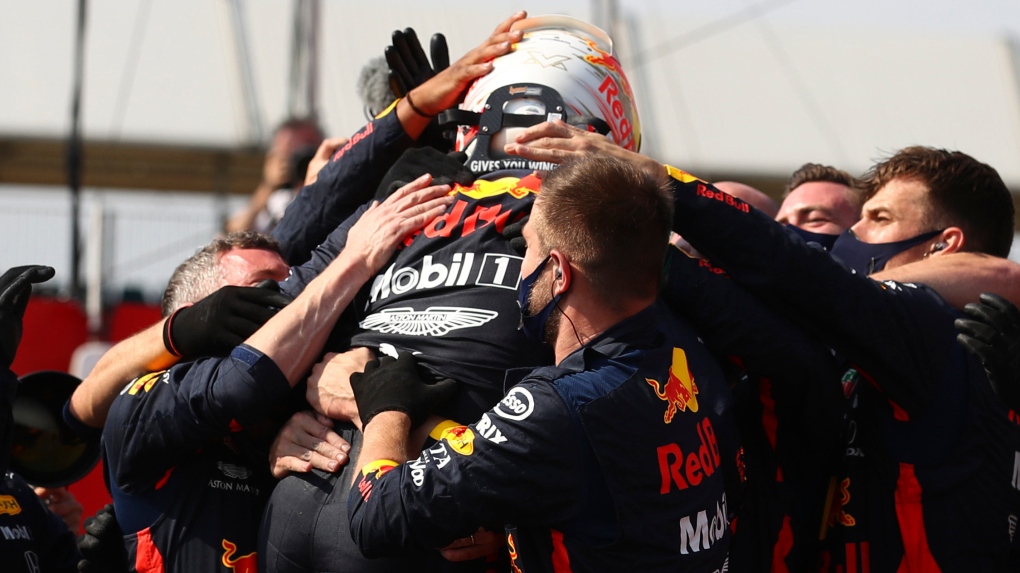 SILVERSTONE, ENGLAND -- Max Verstappen sprung what could be the surprise of the Formula One season by beating Lewis Hamilton to win the 70th Anniversary Grand Prix on Sunday.

"I didn't see it coming but after the first stint it seemed we were really good on tires," Verstappen said after his ninth career win. "We had a lot of pace in the car. I didn't have any tire issues and we kept pushing.

"It was an incredible result to win, so everything worked out well and I am very happy."

Mercedes had been expected to cruise to its fifth win from as many rounds this season. But both Hamilton and Bottas struggled with their tires to clear the way for Verstappen to take an unlikely win.

"It was a massive challenge," Hamilton said. "Congrats to the Red Bull team and to Max. They didn't have the problems we had today.

"It was definitely unexpected to have the blistering as hardcore. as we experienced. I was nervous the tire was going to explode but I am grateful I managed to progress and get through the race."

Hamilton will head to next week's Spanish Grand Prix with a 30-point championship lead over second-place Verstappen. Hamilton has 107 points, Verstappen 77 and Bottas 73.

Hamilton's Mercedes team has been the class act of the field this year and, after pole-sitter Bottas beat Hamilton to the first corner, it looked as though it would be a straight fight between the all-black cars for victory.

But Verstappen, who moved ahead of Racing Point's Nico Hulkenberg at the opening bend, remained hot on their heels. Both Mercedes cars started on the medium tires, with Verstappen on the more durable hard tire.

Verstappen sensed that the Mercedes cars were struggling and was soon hunting down Hamilton. At one stage, he was told to drop off Hamilton's gearbox to protect his tires.

"This is the only chance to beat Mercedes," he said over the radio. "I am not going to sit back like a grandma."

And he remained aggressive. Bottas pitted from the lead on lap 13 with Hamilton following in for fresh tires on the following lap. Verstappen took the lead and, when he came in for new tires at the midway stage of the race, he left the pits just behind Bottas.

Verstappen took only a handful of corners to regain top spot after he resisted Bottas' tame defence.

Both Verstappen and Bottas came in with 20 laps remaining for a second time, while Hamilton remained out on wearing tires until lap 41 of 52.

Hamilton emerged down in fourth but the 35-year-old showed good pace on the fresh tires, posting the fastest lap of the race before overtaking Leclerc at Stowe for third. He then set his sights on hunting down Bottas and, with two laps to run, he passed his teammate around the outside of Brooklands.

After Verstappen cruised to victory, Nico Hulkenberg finished seventh, while Sebastian Vettel was outside the points in 12th following an opening-lap spin.