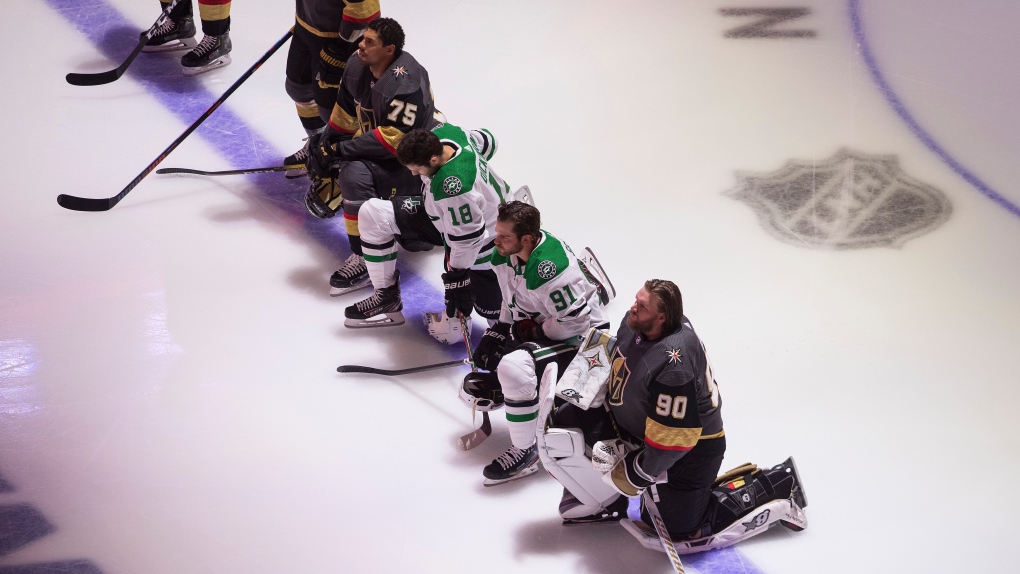 EDMONTON -- Minnesota Wild defenceman Matt Dumba says he will continue to publicly protest racial injustice as the NHL returns to action in the hub cities of Edmonton and Toronto.

On Monday, he was not alone.

"I talked to Reaves in warmups. He said him and Lehner were going to kneel, and asked if I'd like to join them. I said, 'absolutely,"' said Seguin. "Before the game, went in the dressing room and told every one what I was doing. Told them there was no pressure to do anything. Dickinson grabbed me and said he'd like to be a part of it, and support his beliefs and my beliefs."

"An easy decision for me."

Dickinson added: "I have some people of colour in my family, my dad's from the Islands, one of my uncle's is Black. I was nervous to think about doing it on my own. When (Seguin) said it, it was a no brainer.

Dumba was the first NHL player to kneel during the restart when he took a knee for the U.S. anthem before Edmonton took on Chicago on Saturday in the first restart game at Rogers Place. He also made a speech at centre ice before the game stressing the need for social and racial justice.

On Sunday, he raised his fist on the Wild's bench during both the Canadian and American national anthems before Minnesota's 3-0 win over Vancouver in the opener of their best-of-five playoff series.

The Regina native, who is half-Filipino, said he intends to do that for the rest of the NHL's restart from the COVID-19 pandemic in homage to former Wild forward J.T. Brown.

Brown did the same during the American national anthem in 2017 as a member of the Tampa Bay Lightning to protest police brutality and racism.

Previously, NHL players hadn't been as visible as those in other pro sports leagues -- particularly the NBA and Major League Soccer -- in addressing racial injustice since the death of George Floyd, a Black man, at the hands of Minneapolis police officers in May.

In the NBA, all players and staff of the Los Angeles Lakers and Toronto Raptors knelt for both the Canadian and American anthems when those teams met Saturday at the Walt Disney World complex near Orlando, Fla.

Wild players have said they support Dumba's protest and are proud he is taking a stand. Forward Marcus Foligno led off his latest diary from inside the Edmonton bubble for The Athletic with an account of the team gathering to watch Dumba's speech before the Oilers-Blackhawks game.

Whether they join him on the ice remains to be seen, however. Wild coach Dean Evason said Monday that there has been no talk of having other Minnesota players raise a fist with their teammate before games.

"Nope, there's been no discussions, and the only thing that we've discussed as a staff, as I've mentioned before, is that we want to eliminate racism for good," Evason said to close Monday's availability with reporters.

Early in the series between Toronto and Columbus, the suffocating Blue Jackets defence has been more than a match for the Maple Leafs' offensively gifted lineup.

Overcoming a defensive system designed to frustrate will be key for Toronto as the Leafs look to even their best-of-five playoff qualifying series on Tuesday.

The Blue Jackets outshot Toronto 35-28 on Sunday en route to a 2-0 victory at Scotiabank Arena. Columbus blocked 18 shots to help goaltender Joonas Korpisalo pick up the shutout in his post-season debut.

"That's what their system is designed to do, to frustrate you," Maple Leafs head coach Sheldon Keefe said Monday. "The good news is just talking to our guys, and the type of practice that we had, our guys are not frustrated. They're hungry to get back at it, to recognize where we can get better and that we have more to give."

Columbus had success keeping Toronto's dangerous power play off the ice Sunday, taking just one minor penalty. Columbus spent the least amount of time short-handed of any NHL team during the regular season.

"It's another thing we expected, that power plays were going to be really tough to come by," Keefe said. "We have to take advantage of the ones we do get, look to keep our feet moving, look to find ways to draw as many (penalties) as we can."

"Definitely not enough shots on net, didn't produce enough offensively," he said. "The goal for tomorrow is just have more confidence with the puck."

The Vancouver Canucks are shorter on playoff experience than some other teams in the Western Conference hub, so they will need big contributions from some of their young core to make a run.

One player that impressed Canucks head coach Travis Green is star winger Elias Pettersson, who made his post-season debut in Sunday's loss to Minnesota. The 21-year-old Swede led all Canucks forwards with 19 minutes 38 seconds of ice time.

"I thought Petey was fantastic," Green said. "You might say 'How could Petey be fantastic when he didn't get a point?' But his compete level was very high.

"Obviously he's a guy that other teams are going to key on in the playoffs, and he embraced it."

BAD BOY OF THE BUBBLE

Vancouver forward Micheal Ferland was issued a US$5,000 fine, the maximum allowed, for spearing Minnesota winger Ryan Hartman during the third period of Sunday's game.

Wild forward Luke Kunin, who grabbed Ferland's stick from the Minnesota bench before the spear, was fined $1,000 for unsportsmanlike conduct.

Asked if he was surprised Ferland escaped a suspension, Evason said: "Out of our control. I don't really have an opinion one way or another."

Ferland was assessed a minor penalty for slashing on the play, while the Wild received a bench minor for interference.

The NHL says there have been zero positive coronavirus test results since 24 teams entered quarantined bubbles in Toronto and Edmonton.

The league announced it had administered 7,013 tests to players, coaches, staff and officials over the past week. Teams with 52-member travelling parties entered the bubbles July 26.

There are daily tests for all team members in the bubbles.