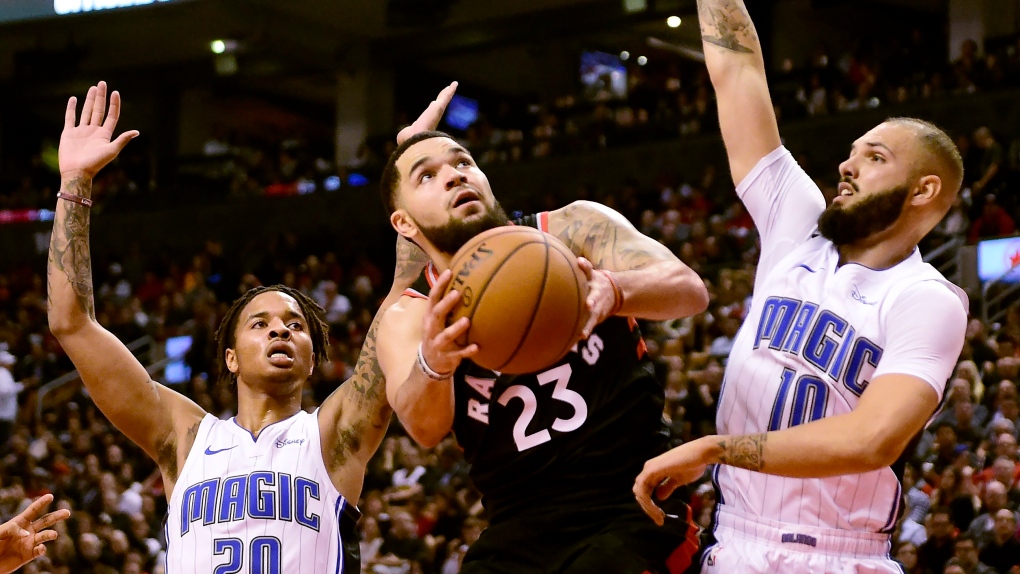 VanVleet, who started at point guard for the sixth consecutive night in place of an injured Kyle Lowry, scored 24 points to lead the Raptors past the Orlando Magic 113-97 on Wednesday in a battle between short-handed teams.

"His finishing, his layup package is insane," teammate Pascal Siakam said of the guard known as Steady Freddy. "He's fast, crafty. He always knows how to kind of use his body. So it's definitely impressive what he's been able to do. He's just playing at a very high level right now."

The Raptors (10-4) improved to 6-0 on the season at Scotiabank Arena, while Orlando (6-8) remains winless in five road games.

It was a second consecutive career night for Toronto's undrafted rookie Davis, who finished with 19 points to top his previous career-high 16 points he scored -- in less than four minutes -- on Monday.

"It's two games in a row the guy's checked in (and) just started nailing threes, just right off the bench, and gave our offence a big boost, and they've been momentum changes I think in both games," coach Nick Nurse said.

Siakam finished with 18 points and 11 rebounds for the Raptors, who were missing both Lowry and Serge Ibaka for the sixth straight game. Norm Powell chipped in with 15 points, and Boucher grabbed a season-high 11 rebounds to go with 14 points.

Evan Fournier had 21 points for the Magic, who lost both all-star centre Nikola Vucevic and Aaron Gordon in the first half to right ankle sprains.

The Raptors' 10th win of the season wasn't pretty. Two nights after dishing out a franchise-record 40 assists, the Raptors had just 26 on Wednesday. But they shot 52.3 per cent on the night to Orlando's 38.5, and clobbered the Magic 68-40 in the paint.

Concerns around the Raptors' depth was a storyline of the early season before injuries forced Nurse to look to the likes of Davis, Boucher and Hollis-Jefferson. And their pure hustle -- once again -- played a huge role in Toronto's win.

"We're just some hard-playing guys, just bringing energy," Davis said. "On the bench today Chris . . . just pointed up, like when we get in we've got to pick the energy up. It's just about energy and then the game just takes care of itself. We've been playing together for a few games now and it's really just bringing energy and taking what the defence gives up."

Trailing for almost all of the first quarter, they managed to put together double-digit advantages for much of the second and third, taking a 79-68 lead into the final frame at Scotiabank Arena.

The Raptors built their lead to 15 points early in the fourth but back-to-back three-pointers by former Raptor Terrence Ross cut Toronto's advantage to nine with nine minutes to play. Toronto battled back and Siakam's jump shot with 4:53 to play had the Raptors up by 19 points.

Toronto didn't let up and Nurse emptied his bench over the final few minutes.

The Raptors were missing Lowry and Ibaka for the sixth straight game. Nurse hopes to have Ibaka (sprained ankle) back on Saturday, when the team travels to Atlanta. Nurse said he had no update on Lowry, who fractured his left thumb.

Anunoby missed the better part of two games when he was swatted in the eye by former teammate Kawhi Leonard, suffering an eye contusion. Then on Monday, he took an elbow to the eye from Charlotte's Nicolas Batum cutting short what was already a career night.

Orlando was the team really feeling the injury bug Wednesday. Vucevic left the game after rolling his ankle coming down from a block attempt with 5:29 to play in the second quarter. Vucevic, who was helped off the court and to the locker-room, had six rebounds, five assists and three points. Gordon was helped off the court about three minutes earlier after attempting to stop an Anunoby dunk.

The Raptors trailed for almost all of the first quarter. A three-point play by Isaac had Orlando up by eight points but Toronto outscored Orlando 18-10 to close the quarter, sending the game into the second tied at 32-32.

The Raptors rode their momentum into the second quarter and Siakam's three-pointer capped a 21-9 Raptors run that had the home team up by 12. D.J. Augustin, who hit the winning three-pointer in Orlando's Game 1 victory over Toronto in last season's playoffs, drained a three at the buzzer, slicing the Raptors' lead to 61-54 heading into halftime.

The Raptors beat Orlando, their first-round opponent from last season's playoffs, on Oct. 28.

Wednesday's game was part of a stretch of seven of nine at home. The Raptors are in Atlanta on Saturday then return home to host the Philadelphia 76ers on Monday.