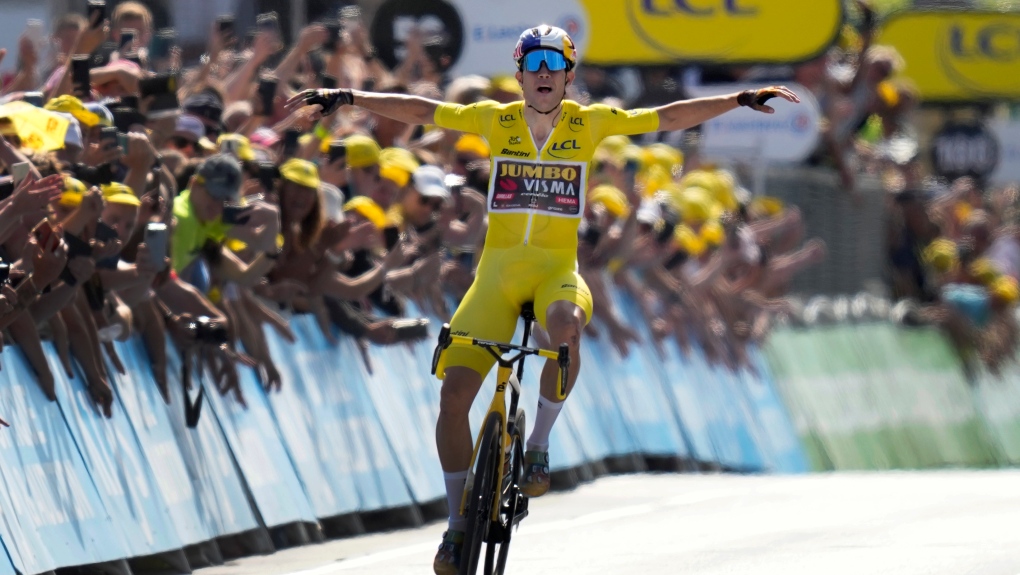 Belgian rider Wout van Aert won the hilly fourth stage of the Tour de France and extended his overall lead after attacking strongly on the day's final climb on Tuesday.

The Belgian rider kept the leader's yellow jersey for the Jumbo--Visma team after taking it for the first time on Saturday. He also extended his lead in the green jersey contest for best sprinter.

Van Aert shook up the peloton when he surged ahead up the last of the five climbs -- a 900-meter ascent up Cote du Cap Blanc-Nez at a gradient of 7.5 per cent -- about 10 kilometres from the end.

He said he felt an early attack was the best way to avoid a mass sprint at the line.

"I didn't want to take the risk of losing anymore. It was quite obvious that we were trying something with the team," he said. "I went full gas to see what would happen. I went all out."

The 27-year-old Van Aert is considered one of the best multi-skilled riders in the world and is a former three-time cyclo-cross world champion and a one-day classics specialist.

The Jumbo-Visma rider flapped his hands like a bird's wings as he sat up on his bike. He crossed the line eight seconds clear of countryman Jasper Philipsen of the Alpecin--Fenix team, with Jumbo-Visma teammate Christophe Laporte taking third place in a sprint finish.

"This jersey gives wings. It was definitely a tough climb but this stage was very likely going to end up in bunch sprint," Van Aert said. "It was difficult to finish alone, but thanks to the work of my teammates, I did it. It was up to me to finish it off."

Van Aert picked up a 10-second time bonus and is now 25 seconds ahead of Yves Lampaert in the overall standings and 32 seconds clear of two-time defending champion Tadej Pogacar.

Hugo Houle of Sainte-Perpetue, Que., was the top Canadian in the fourth stage. The Israel-Premier Tech rider finished 24th on Tuesday and moved to 61st overall, one minute 51 seconds behind van Aert.

After a travel day, riders tackled a sunny 171.5-kilometre route from the coastal city of Dunkirk to Calais, where riders could see the English coastline when they arrived into the much-used port location. Van Aert completed it in 4 hours, 1 minute, 36 seconds.

Danish rider Magnus Cort, who thrilled crowds with his breakaway rides during three intense days in Denmark, was again in the early breakaway -- this time alongside Anthony Perez.

Perez pulled ahead some 45 kilometres out and Cort was caught by the peloton shortly after. Cort picked up more points in the polka-dot jersey bid but much more difficult climbs in the Alps and Pyrenees are still to come.

Wednesday's fifth stage is a flat stage for sprinters over 157 kilometres starting at Lille Metropole and going over some of the feared cobblestones that feature on the Paris-Roubaix one-day classic.

The race ends on July 24 in Paris.