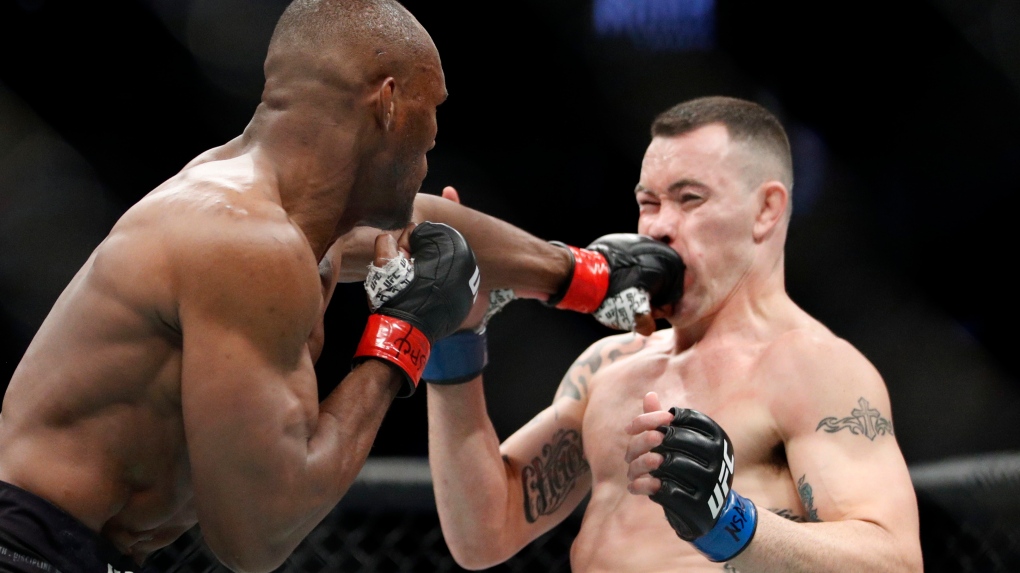 Kamaru Usman sent a bloodied, bleary Colby Covington spiraling to the ground for the second time. Usman then leaped on him and went to work on Covington's badly injured face, battering his dazed opponent with hammer fists until the referee mercifully intervened.

Although he had to wait until the final minute, Usman settled his very personal feud with his sharply divisive challenger in perhaps the most satisfying way possible.

"This one is not just for me," Usman said. "This is for the whole entire world right now."

Usman brutally stopped Covington with 50 seconds left in their bout at UFC 245 on Saturday night, retaining his UFC welterweight belt with a spectacular finish to their grudge match.

Usman (16-1) closed out an occasionally slow fight with Covington (15-2) in thrilling fashion, knocking down the challenger twice with right hands and then decisively finishing him on the ground. Although he didn't break his jaw as he feared, Covington couldn't withstand the pressure of Usman, who drew strength from the personal animus he took into the cage.

"He talked a lot going into this, so this was a respect thing," said Usman, who won his 11th straight fight. "I had a responsibility to go in there and teach him a lesson."

The Nigeria-born, Texas-raised Usman made good on his vow to derail the career of Covington, whose grating personality and eager embrace of President Donald Trump have made him a polarizing, widely reviled figure in mixed martial arts.

Covington recently claimed he is only playing a character in the tradition of a classic wrestling heel. UFC President Dana White and a long list of his onetime teammates -- including UFC stars Jon Jones, Jorge Masvidal and Tyron Woodley -- all say Covington is just a difficult, unlikable person.

Usman was thrilled to beat up a bully.

"Everyone was like, `Oh, Colby is in his head!"' Usman said. "'He's going to gas out, fight emotional!' I'm telling you guys right now, the reason I'm the best in the world is because my mind is stronger than everyone in the division."

Covington and Usman started with two busy rounds of striking in which Covington appeared to be landing more blows, but Covington poked Usman in the eye during the third. Usman responded by bloodying Covington in an impressive third-round flurry, and Covington subsequently told his corner that he thought his jaw was broken -- but it wasn't, according to the UFC's physicians.

Usman took control from there, gradually finishing Covington in his first defence of the belt he took from Woodley earlier this year.

Covington sprinted from the cage after the decision, declining to congratulate Usman.

"I made a lot of mistakes, but I know I hit harder than him," Usman said.

The judges favoured Volkanovski 48-47, 48-47 and 50-45. Holloway struggled to land consistent strikes while dodging Volkanovski's barrage of leg kicks, but the long-reigning champ still appeared surprised and disappointed by the judges' verdict in just his second loss since 2013.

"It means the world," Volkanovski said. "I have two kids at home. Everything is about my family. Spending time away from them kills me, but this is for them, a little early Christmas present for them."

Volkanovski earned his title shot with 17 straight victories, including seven since joining the UFC, capped by a win over Aldo in May.

"Featherweight has always had great, respectful champions who always fight the next contenders in line, and I appreciate that," Volkanovski said. "There's a lot of people who have earned their shot and aren't given it, so I'm going to make sure everyone who earns it, gets it."

Holloway said he hasn't decided whether he will resume his career at featherweight or lightweight, but the 28-year-old vowed to come back strong.

"I don't want to sound like a sore loser," said Holloway, who thought he won the final three rounds. "I didn't watch tape, (but) I thought I was doing enough."

Nunes (19-4) earned her 10th straight win and fifth bantamweight title defence over a half-decade of UFC dominance, but the two-division champion had to rely on her wrestling skills to dominate her 135-pound rematch with De Randamie (9-4), the former 145-pound UFC champion.

"My game plan was to go five rounds and work the takedown," Nunes said. "I almost got two submissions, but I made some mistakes and I have to fix that. Just a little bit of the technique was off, but I will fix it and next time I will get it."

After Nunes nearly finished in a one-sided first round, De Randamie surprised Nunes with several effective strikes in the second. Nunes wisely landed multiple takedowns to control the rest of the bout, keeping De Randamie on the mat and unable to land a home-run strike.

Nunes added the featherweight belt last December with her 51-second thrashing of Cris "Cyborg" Justino, cementing her place among the sport's greats. Still only 31 years old, Nunes has said she will defend that 145-pound belt in her next fight, which would make her the first UFC fighter to defend two titles simultaneously.

Earlier on the pay-per-view portion of the show, Aldo (28-6) lost a split decision to fellow Brazilian contender Marlon Moraes (23-6-1).

Russian bantamweight contender Petr Yan stopped Urijah Faber with a single head kick in the third round. Yan (14-1) battered and bloodied the 40-year-old veteran with two knockdowns in the second before finishing Faber and then calling out two-division champ Henry Cejudo afterward.