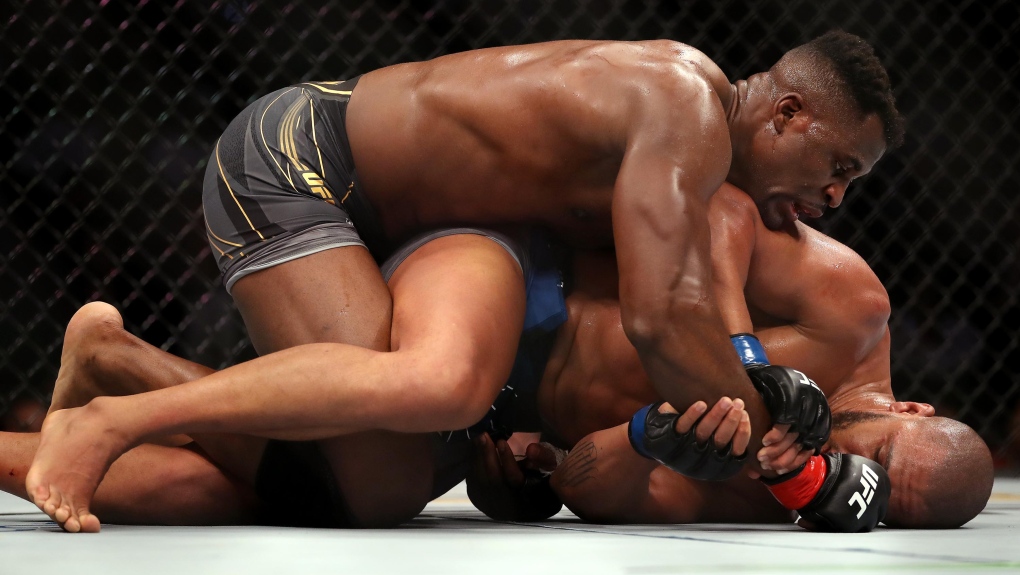 Ngannou grapples on the ground with Gane. (Katelyn Mulcahy/Getty Images/CNN)

Francis Ngannou beat Ciryl Gane at UFC 270 on Saturday night to retain his heavyweight title and unify the division.

Hampered by knee injuries -- which he revealed after the fight -- Ngannou, known for being one of the sport's biggest punchers, relied on his wrestling and ground game against Gane.

And despite appearing down after the first two rounds, the 35-year-old finished the evening winning by a unanimous decision at Honda Center in Anaheim.

In beating Gane, the interim UFC heavyweight champion, Ngannou cements his position as one of the most dangerous fighters in the sport.

And the impressive victory comes despite suffering substantial injuries to his knees three weeks ago. The Cameroonian fighter said afterwards he had torn his right MCL and damaged his ACL during training.

He had multiple doctors recommend he withdraw from the fight, but he chose not to because he wanted to "remind people I'm the champ."

Ngannou's record now goes to 17-3, while the defeat was the first of Gane's MMA career, slipping to 10-1.

The two fighters have a long history together -- they used to be sparring partners back in Paris and Gane's head coach, Fernand Lopez, was Ngannou's former mentor.

Talk of Ngannou's future UFC dominated the build up to the fight though, as he believes he's not paid well enough by Dana White and the UFC.

And afterwards, he didn't rule out a future elsewhere. "Boxing is always in the back of my pocket," Ngannou said in the Octagon after the fight.

"It is something I must do before the end of my career ... It's not like I have a lifetime here."

Earlier in the evening, Deiveson Figueiredo reclaimed the UFC flyweight title with a unanimous decision victory over Brandon Moreno.

In what is the third meeting between the two -- with a draw and a Moreno victory before Saturday -- it was Brazil's Figueiredo who managed to outlast Mexico's Moreno.

Figueiredo, who becomes a two-time flyweight champion with the victory, managed to floor Moreno numerous times in front of a crowd dominated by Mexican fans supporting Moreno.

After his victory, 34-year-old Figueiredo called for a fourth fight between the two.

"Today is my day," Figueiredo said. "For this moment, for Brandon, for us to give you the gift of a fight of the night, for everyone who was here. I've been away from my family for four months. I'm ready for a fourth fight against Brandon in Mexico."