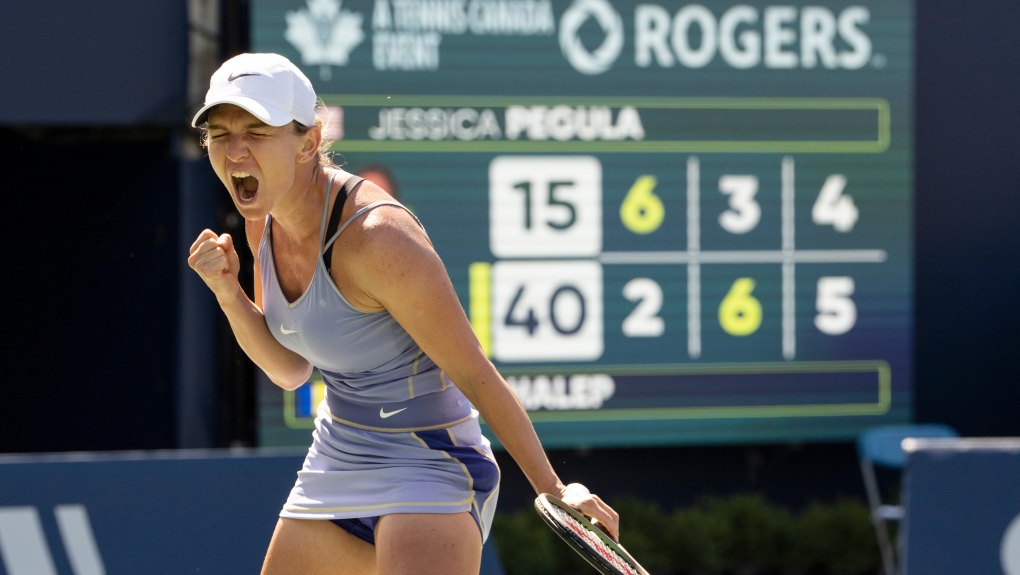 Overcome with frustration, Simona Halep doubled over and started smashing her racket on the hard court at Sobeys Stadium after she missed a return late in the third set of her semifinal.

The two-time champion harnessed that passion to beat Jessica Pegula of the United States 2-6, 6-3, 6-4 in the National Bank Open's first semifinal on Saturday. The 15th-seeded Halep will face Brazil's Beatriz Haddad Maia in Sunday's final.

Haddad Maia beat Karolina Pliskova of the Czech Republic 6-4, 7-6 (9) in the late semifinal to reach a WTA Masters event final for the first time.

Halep said that destroying her racket shows that she's herself again.

"The fire is back," said a smiling Halep. "It's a good sign if I do that. It looks like I'm fighting. It helps me sometimes. I don't know if it's always good or not, but it helps me."

Halep started her season with a victory at the Melbourne Summer Set 1. Although it was the 23rd title of her career, it was the first since 2020. In early April she announced she would begin working with coach Patrick Mouratoglou.

She said that Mouratoglou's influence has rekindled her passion for tennis.

"The person next to us. Patrick. He brought it," said Halep, gesturing toward Mouratoglou. She said that training at his tennis school in the French Riviera has been inspirational.

"The vibe from the academy gave me the energy. To see all those kids fighting every day to touch the dream that they have — I felt that I still can do it. I still have it inside myself."

After beating Pliskova, Haddad Maia described herself as an emotional player who often screams or pumps her fist on the court. She said that like Halep she's learning to channel that passion productively.

"I just try to breathe a little bit more. I try to calm down and think about what I need to do and not what I'm experiencing," said Haddad Maia. "I try to play every point and think about the next shot.

The WTA event was hard on seeded players with the top six all being eliminated before the quarterfinals. Haddad Maia was responsible for three of those upsets, taking down 13th seeded Leylah Fernandez of Laval, Que., world No. 1 Iga Swiatek, and 14th seeded Pliskova in succession.

A year ago Haddad Maia was ranked 183rd in the world, she entered this week's tournament No. 24 and will crack the top 20 next week.

"I think the results have come because of the hard work," she said. "The only thing I changed in the last 12 months was to focus more on the process and not about results.

"For sure we set goals, and my next goal was to be in the top 20. So I'm very happy because we never know in tennis when it's going to happen."

Both Halep and Pegula were visibly frustrated with their own play in the third set after several unforced errors or double faults. Halep finished the match with 10 double faults to Pegula's one, but the American struggled with the placement of her returns.

Romanian flags dotted the stands at the tennis-specific venue on York University's campus and Halep, who won what was then called the Rogers Cup in 2016 and 2018, said she appreciated the support.

"They sent a lot of energy. In the tough moments they really pushed me."

In the late semifinal, Haddad Maia was dominant for most of the first set, quickly building a 5-1 lead. Plishkova started to build some momentum, however, winning three consecutive games.

Haddad Maia's 184 km/h serve on set point left Plishkova off-footed and the Czech player put her return into the net.

Plishkova had a strong start to the second set, building a 4-1 lead. But the 26-year-old Brazilian dug deep, tying the set 5-5.

After they exchanged games, the second set went to tiebreak.

Pegula teamed with fellow American Coco Gauff later Saturday in the semifinal of the doubles tournament, beating Madison Keys of the U.S. and India's Sania Mirza 7-5, 7-5 to advance to Sunday.

This report by The Canadian Press was first published Aug. 13, 2022.