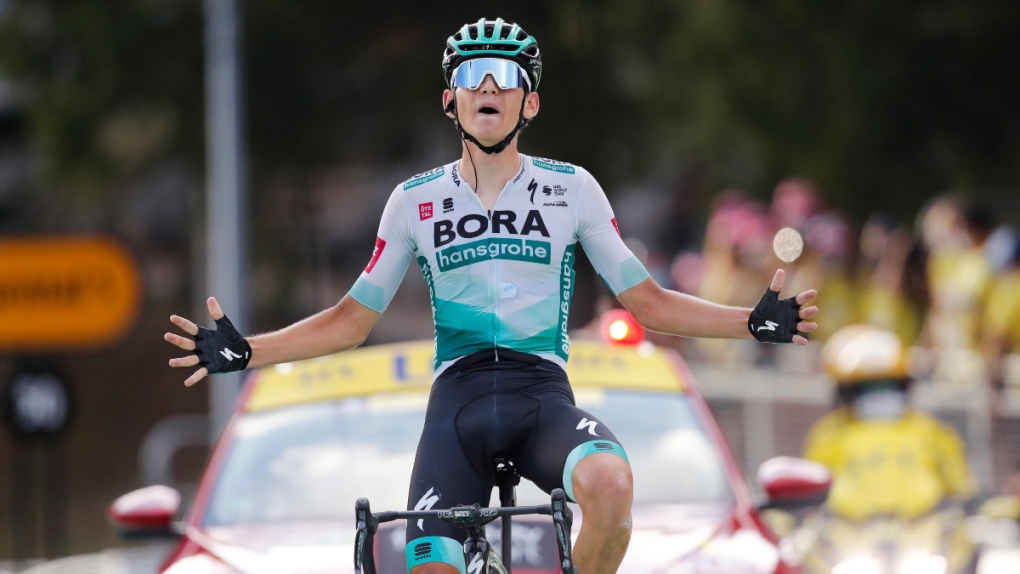 The 24-year-old German rider won the roller-coaster Stage 16 featuring five categorized climbs after pulling clear of a group of breakaway riders as the race entered the Alps on Tuesday.

Kamna was beaten by four seconds for the stage win by Daniel Martinez on Stage 13.

“It was a fight from the beginning on and I knew I had to make it to the finish alone,” said Kamna, who also won a stage last month at the Criterium du Dauphine.

Canada's Hugo Houle, a support rider for the Astana Pro Team, finished 57th in the stage. The 29-year-old from Sainte-Perpetue, Que., is 49th overall.

There was no significant change in the overall standings ahead of Wednesday's mammoth summit finish in the high mountains as yellow jersey holder Primoz Roglic kept his 40-second lead over second-place Tadej Pogacar intact.

The Slovenian pair enjoyed a quiet day in the pack of main contenders and crossed the finish line 16 minutes, 48 seconds behind the stage winner, who is not a threat in the overall standings. Rigoberto Uran of Colombia remained in third place overall, 1 minute, 34 seconds off the pace.

Pogacar tested Roglic's legs on the final ascent but could not gain time on his rival.

“It was a good warmup for tomorrow, the queen stage of the race,” Pogacar said.

Pogacar, a 21-year-old Tour rookie, will have another chance to unsettle Roglic during Wednesday's Stage 17 - arguably the toughest - featuring the Col de La Madeleine and the Col de La Loze, the highest point this year at 2,304 metres. The last six kilometres (4 miles) of the climb are particularly difficult, with very steep sections and sharp turns.

“There will be gaps and a mix-up on the GC (general classification),” Pogacar continued. “We see everyone is exhausted.”

The 24-year-old Kamna, who rides for the Bora-hansgrohe team, made his decisive move on the penultimate ascent to drop former race leader Julian Alaphilippe, Richard Carapaz and Sebastien Reichenbach, three rivals with a strong pedigree.

Kamna was part of a group of 15 riders who broke away from the peloton early in the 164-kilometre (102-mile) trek.

Among them, Frenchman Quentin Pacher also tried a solo escape but his effort was short lived as he was easily caught and then dropped by Alaphilippe, Carapaz, Reichenbach and Kamna. Carapaz, the Giro d'Italia champion, made Alaphilippe and Reichenbach crack with a couple of biting attacks but could not respond when Kamna countered before the summit.

The German was faster than his remaining rival in the downhill and on the flat sections as he sped toward Villard-de-Lans to post the biggest win of his career.

“When I saw that Carapaz was dropping the speed, I thought now it's the time to go and went all in to the end,” Kamna said. “It's a big relief also for the team and for me. I can almost not imagine it. The step I made this year is huge and I'm so blessed to win today.”

After losing more than seven minutes in the Jura mountains Sunday, defending champion Egan Bernal went through another day of hardship at the back of the race, getting dropped by the main contenders in the 11.1-kilometre steep climb where Kamna built his success.

The remaining 156 Tour de France riders were authorized to start the stage after the UCI and race organizers announced that all 785 COVID-19 tests on Sunday and Monday of riders and staff members of the 22 teams returned negative,

No rider has tested positive since the race started on Aug. 29 in Nice. The latest screening around the race's second rest day was the fourth since the beginning of the Tour, and the last one before the peloton reaches the Champs Elysees on Sunday.