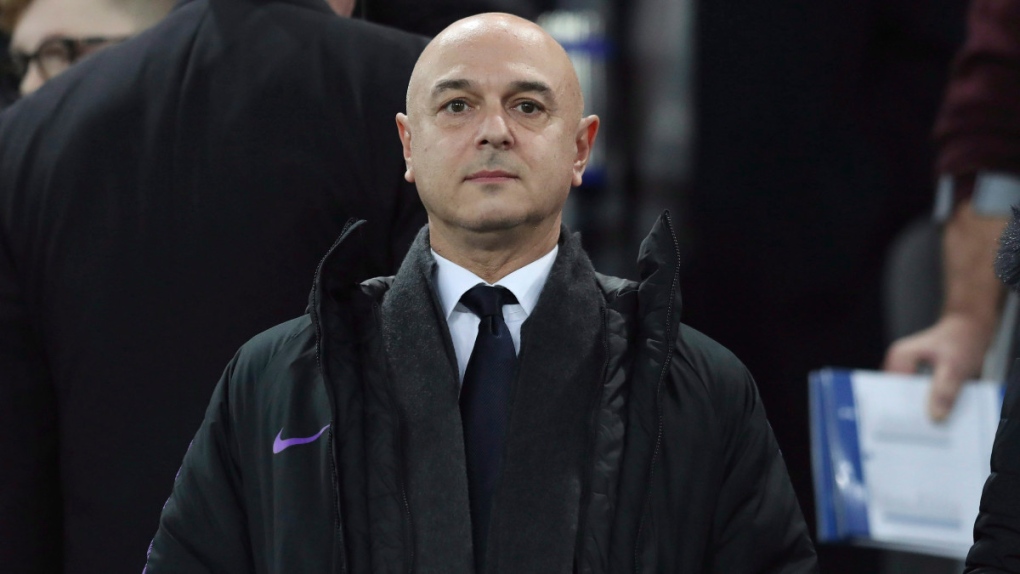 Tottenham chairman Daniel Levy says salaries for non-playing staff are being cut due to the coronavirus pandemic as the club has disclosed his pay package more than doubled to 7 million pounds (US$9 million) last year.

The disclosure on Tuesday about Levy's salary and bonus for the north London club's new stadium being completed came in accounts also published on the British company register.

The corporate filing of the 2018-19 club's annual report came as Tottenham is grappling with the unexpected economic fallout of the Premier League -- and all sport in Britain -- being halted in an effort to contain the spread of the COVID-19 disease. That has led Tottenham to follow Barcelona and Juventus in trying to reduce the wage bill, including of the club's leadership.

"Yesterday, having already taken steps to reduce costs," Levy said on the club website on Tuesday, "we ourselves made the difficult decision --- in order to protect jobs --- to reduce the remuneration of all 550 non-playing directors and employees for April and May by 20% utilizing, where appropriate, the government's furlough scheme. We shall continue to review this position."

The club did not respond to a question about how many staff were being furloughed.

In the statement, Levy said "the club's operations have effectively ceased" and there is "no certainty when we may play games again or whether we will be allowed to play in front of our fans."

Levy indicated a desire for coach Jose Mourinho and the players to accept forgoing some pay as well.

"We hope the current discussions between the Premier League, PFA (Professional Footballers' Association) and LMA (League Managers Association) will result in players and coaches doing their bit for the football ecosystem," Levy said.

"Many families will have lost loved ones, many businesses will have been destroyed, millions of jobs lost and many clubs whether big or small may struggle to exist," Levy added. "It is incumbent on me as chairman to ensure we do everything we can to protect our employees, our fans, our partners, our club for future generations --- and equally important --- our wider community where we have such an immense sense of responsibility."

The disclosure about Levy's pay from the club as the "highest paid director" came in accounts the club has to file annually to Companies House. Levy received a salary of 4 million pounds -- up from 3 million pounds in 2017-18 -- plus a deferred bonus of 3 million pounds for the new 61,000-seat stadium being completed last year.

Levy's pay rise coincided with one of Tottenham's most successful seasons, reaching a first Champions League final -- losing to Liverpool -- and finishing in the Premier League's top four for a fourth successive season to secure a place back in Europe's elite competition.