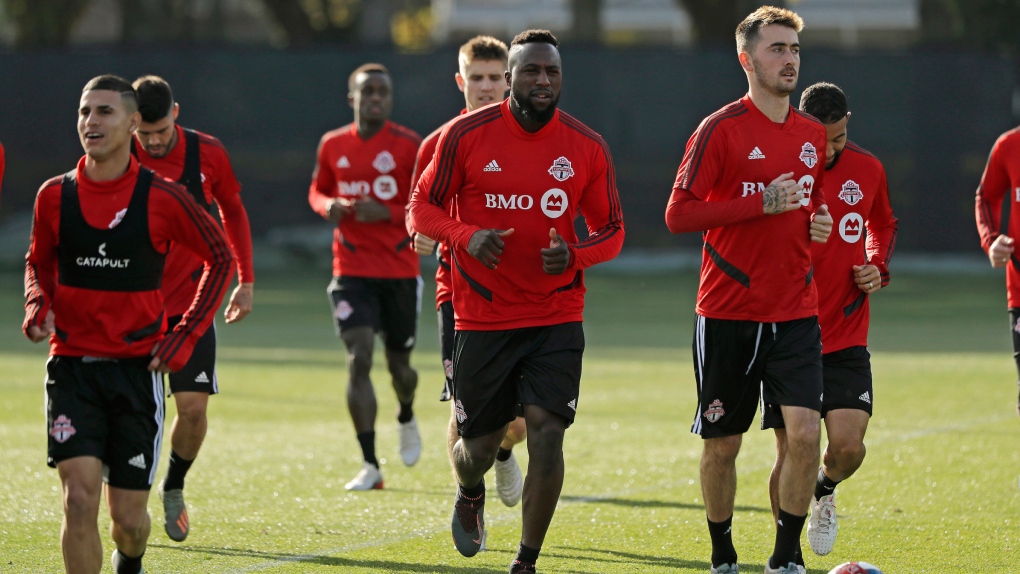 TORONTO -- It's been 20-plus years since Jim Liston used to train Greg Vanney and Dan Calichman in a small space in Pasadena, Calif.

"We had very little space," Liston recalled. "About 2,000 square feet where we'd do physical therapy and training. We would get a dozen athletes and therapy going on at the same time, So we had to kind of figure out how to work things in a tight space.

"Maybe that was in preparation for this, I guess."

Today, Vanney coaches Toronto FC with Calichman an assistant coach. And Liston, as the MLS club's director of sports science, is helping look after a soccer team scattered across the city behind closed doors.

Like almost everyone else, the TFC players are hunkered down at home because of the COVID-19 outbreak. And the 55-year-old Liston, one of the first people Vanney called when he took over as head coach in August 2014, is still problem-solving.

It started in earnest on March 12, when Toronto cancelled a scheduled training session at BMO Field and sent players home as MLS suspended play because of the virus. Liston, strength and conditioning coach Tom Williams and others at the club started formulating a plan to keep the players on point.

"We figured we had three days to solve the problem," he said.

Last week the club shipped out eight exercise bikes, four treadmills, three Peleton bikes and two Airdyne bikes, redeploying some equipment from the club's north Toronto training facility and ordering the rest. More bikes headed out this week to the players, some of whom have also received weights.

Earlier this week the players got heart-rate monitors and GPS units with a vest and charging unit. They use an app on their phone to load the data so the team can track what they are doing on a daily basis.

They have also received rubber bands, cones, boots, running shoes, soccer balls and other workout gear. The groups are organized essentially by what equipment the players have.

The players are having a couple of meals delivered after each of the training sessions Monday, Wednesday and Friday as well as protein shakes and powder.

"This is Week 2. Everyone has what they need," said Liston, whose job is to tie the medical and performance side of the club together.

The daily home workout schedule tries to mirror that of the team's normal weekly in-season routine, as if it was playing two games over the seven-day period. Tuesday is a moderate session while Wednesday is the hardest workout. Thursday is a yoga day, Friday a light session and Saturday another demanding workout.

The goal is to keep having new things coming to maintain interest. Assistant coach Nick Theslof is planning some technical drills while Vanney is putting together player-specific videos on the tactical side.

With six weeks of pre-season and two weeks of the regular season under their belts, the players went home in excellent shape. And as pro athletes, the players are more disciplined when it comes to raiding the fridge, says Liston.

"When it comes to eating, they look at it as fuel and for recovery."

Plus Toronto FC players and staff have long raved about the food produced by head chef Elaine Flamenco.

Still, the players are missing some of the other training centre features, including a cryo chamber. While it is a handy recovery tool, it is not a necessity given the team is not playing games at the moment, according to Liston.

The team is also conscious of mental health. While Toronto FC 2 players also have workout groups, the club is looking for ways to further engage them, with many living in apartments.

TFC is looking beyond the players, preparing a modified version of their workout for fans and others stuck at home. That will appear on social media.

A native of Springfield, Mass., he started in engineering before switching his studies to hotel/restaurant/travel administration at the University of Massachusetts (having worked at the campus centre hotel). He moved to Florida and managed a bar at a country club before deciding a change was needed.

He returned home to get a master's degree in health science from Springfield College. California had always been on his bucket list -- Liston has served as a beach lifeguard and with a friend used to talk up the Golden State. So he packed up a U-Haul and drove west.

He worked with a couple in fitness and when they moved back east, Liston joined forces with a physical therapist in 1995 and created CATZ (Competitive Athlete Training Zone) in that small Pasadena space.

Liston started working with Galaxy midfielder Chris Armas, who had been doing therapy with Liston's partner. That led to Liston training Armas and Galaxy teammates Vanney, Calichman and Robin Fraser (a former Toronto assistant coach who now is head coach of the Colorado Rapids) in 1997.

"We would go out in front of the Rose Bowl and train and come into my facility," said Liston, whose two daughters live in California.

More players joined in and as the '98 MLS season was about to start, then-Galaxy coach Octavio Zambrano -- a future Canada men's coach -- came out to watch the training sessions and hired Liston, making him the first full-time strength and conditioning coach in the league.

"It all kind of began in Pasadena out in front of the Rose Bowl," he said of the TFC ties that bind.

This report by The Canadian Press was first published March 27, 2020.