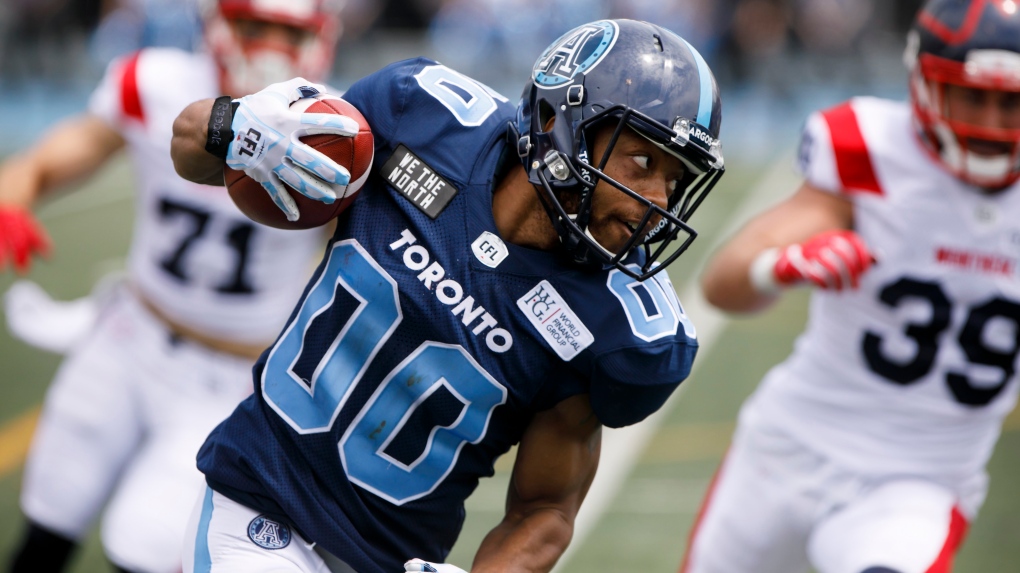 Toronto Argonauts' Chandler Worthy rushes up field with the ball during preseason CFL game action against the Montreal Alouettes at Varsity Stadium in Toronto, Thursday, May 30, 2019. THE CANADIAN PRESS/Cole Burston

TORONTO -- Brandon Bridge made the most of his first opportunity with the Toronto Argonauts.

The native of Mississauga, Ont., completed 9-of-12 passes for a game-high 142 yards and two TDs to help Toronto dispatch the Montreal Alouettes 45-20 Thursday afternoon in the CFL exhibition opener for both teams. The six-foot-five, 235-pound Bridge signed as a free agent with the Argos after two seasons with the Saskatchewan Roughriders.

Bridge highlighted an impressive offensive showing for Toronto, which accumulated 510 net yards and finished with five TD passes. Veteran CFL coach Jacques Chapdelaine is in his first season as the club's offensive co-ordinator.

"In this offence there's a lot more freedom, there's a lot more if you see a guy open you can take it," Bridge said. "I feel like we have a lot of weapons at the receiver position, all we have to do is get them the ball and let them play.

Bridge wasn't the only Argos quarterback to excel in Chapdelaine's offence. The six Toronto passers were a combined 27-of-38 passing for 455 yards with six TDs and only one interception.

Veteran McLeod Bethel-Thompson was a solid 6-of-7 passing for 131 yards and two TDs while starter James Franklin completed 3-of-4 attempts for 70 yards and a touchdown. Rookie Michael O'Connor, an Ottawa native, was also an efficient 4-of-5 passing for 29 yards and a scoring strike.

"The nice part about the offence is you don't necessarily have to call shots for there to be shots," Franklin said. "It just depends on what the defence gives us and the guys took advantage of that."

"Coach Chapdelaine takes opinions, he asks us what kind of plays we're comfortable with and that's how he calls the game," Bridge said. "I feel that's why every quarterback was successful because he at least had a list of plays that quarterbacks liked and he called it according to that."

Bethel-Thompson helped stake Toronto to a commanding 20-0 first-quarter lead. The contest, which began at 11 a.m. ET, was held at Varsity Stadium before 4,314 spectators, most being GTA school children who wildly waved the promotional blue towels they'd received.

The Argos called Varsity Stadium home from 1916 to 1958 and the venue has hosted 30 Grey Cup games.

"It was awesome," Toronto head coach Corey Chamblin said of the stadium atmosphere. "It really felt like a game, especially when they started waving the towels.

"There was a lot of energy."

Chamblin was predictably encouraged with his offence.

"We've got the athletic talent, we have the ability," he said. "We just have to turn potential into production like we did today."

With three Canadian quarterbacks in camp, the possibility exists for Toronto to go with two on their roster. Chamblin said time will dictate exactly what direction the Argos go at the position.

"I just saw Noah (Picton) scramble one time . . . I saw O'Connor do some good things and Brandon Bridge had a touchdown," Chamblin said. "So I was able to see something from each one of them.

"I think they have the talent to make a roster so whether it's having two on our roster or one being on another roster, I know they'll be playing."

Toronto and Montreal conclude their pre-season schedules next Thursday. The Argos visit the Hamilton Tiger-Cats while the Als will host Ottawa.

Montreal opens its regular season in Edmonton on June 14 while Toronto kicks off its '19 campaign hosting Hamilton on June 22.

Bridge put Toronto ahead 34-6 lead with a 79-yard TD strike to Rodney Smith on the Argos' first offensive possession of the second half. O'Connor, a rookie from U.B.C., threw a four-yard strike to Austin Cooper with 6:06 left to play.

Vernon Adams Jr. was the most productive of Montreal's five quarterbacks, completing 8-of-17 passes for 116 yards with a TD and interception. He appeared to have a scoring strike to Richmond Nketiah in the third, but Nketiah fumbled while stretching out to break the plane and Toronto recovered and took over at its six-yard line.

Adams hit Malcom Carter with an eight-yard TD pass in the fourth before Etienne Moisan returned a Dakota Prukop interception 31 yards for the touchdown. The quarterback then found Chris Osei-Kusi on the two-point convert to cut Toronto's lead to 37-18.