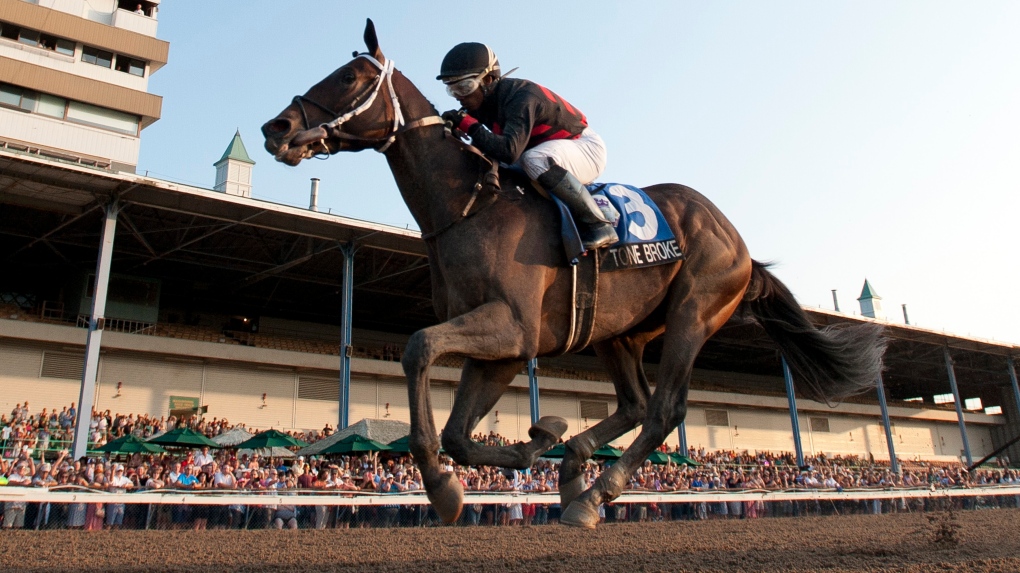 Tone Broke came from deep stretch to win the $400,000 Prince of Wales Stakes at Fort Erie Racetrack. Tone Broke, the 5-1 fourth pick, stood third before kicking into high gear and passing leader Avie's Flatter and even-money favourite One Bad Boy to capture the 1 3/16-mile dirt race in 1:56.56 on a fast track.

"He's just a horse that's a steady horse," said Santana Jr. "The longer a race is, the better he is . . . he kept fighting today.

"As soon as I started asking him when we drove for home he kept running. I knew I had plenty of horse. He ran a really nice race today."

Prat became the first jockey since Kent Desormeaux to do the Derby-Plate double in the same year. Desormeaux did it in the 1998 Derby with Real Quiet and the Plate with Archers Bay while Bill Hartack also accomplished the feat in 1964 with the legendary Northern Dancer.

Although only five horses ran Tuesday, it was a competitive field. One Bad Boy, Avie's Flatter, Tone Broke and He's a Macho Man were the top-four finishers in the Plate while Skywire was the 2-1 race favourite that was 11th in the 14-horse field after being involved in an incident with Tone Broke at the start.

And the Prince of Wales began almost identically to the Plate, with One Bad Boy taking the early lead and Avie's Flatter, the 2-1 second favourite, settling in behind. That came after the two appeared to jostle with one another at the start but not enough to prompt a stewards inquiry at the end of the race.

Tone Broke quickly settled into third Tuesday night behind Avie's Flatter and One Bad Boy. He remained there comfortably until coming on for the two-length victory and $240,000 winner's share.

"He put himself in the spot he wanted to," said Santana Jr., a winner in his first-ever race at Fort Erie. "He was really nice and comfortable in the position he was."

Avie's Flatter finished second ahead of One Bad Boy. He's a Macho Man was fourth with Skywire fifth.

"A five-horse field, a lot of people think it's easy," he said. "I think it's tough because you don't have enough horses, you don't know what the other horses are going to do.

Assistant trainer Darren Fleming echoed those sentiments, especially considering Tone Broke ran without blinkers after using them in the Plate.

"He was a little anxious in the Queen's Plate, he didn't want to settle the first quarter of a mile," Fleming said. "Today he was a lot smoother.

"He just loves to run, I think the further the better."

And Fleming was very happy with the horse's trip.

"It (sitting third) was kind of how it unfolded," he said. "He had a smooth break, he was very relaxed within himself.

The win was Tone Broke's second in four starts this year (two wins, second and third) and third in 10 career races. The winner's share boosted his overall earnings past $400,000.

The third and final jewel is the $400,000 Breeders' Stakes, a 1 1/2 mile turf race slated for Woodbine Racetrack on Aug. 17. Fleming said ultimately trainer Steve Asmussen and the horse's ownership will decide whether Tone Broke will run in that race.

"He's versatile," Fleming said. "I don't think the turf would bother him a bit."

In earlier action, Mr Changue earned his seventh career win and second this year in the fourth race, his first after literally being swallowed up by a big sinkhole at Fort Erie. The horse was grazing in the backstretch July 11 when the ground beneath caved in because of a water main leak.

There was a very scary incident in the fifth race when Mo Cion Daonnan, with Luis Contreras aboard, went down heavily to the turf down the stretch. Amazingly, Contreras was uninjured and continued riding on the card.

There was no word on Mo Cion Daonnan's condition.

Then in the seventh race, Blue Collar Romance (Post 3) and Lovin Spoon Phil (Post 2) were both post-time scratches following an incident in the starting gate.