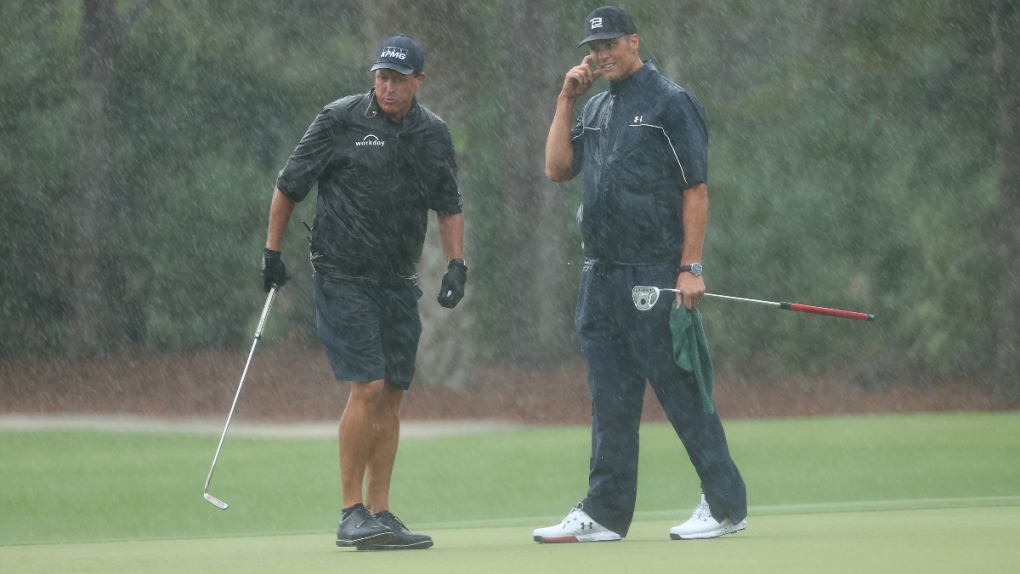 It was a mouth-watering prospect for sports-starved fans everywhere. Four of the greatest athletes the world has ever known, on the golf course at the same time, offering us a glimpse of who they are when they aren't winning Major Championships and Super Bowl trophies.

On Sunday at Medalist Golf Club in Florida, Tiger Woods and Peyton Manning faced off against Phil Mickelson and Tom Brady in "The Match: Champions for Charity." The goal was to raise more than US$10 million for COVID-19-related causes which provide relief for frontline workers, small businesses, and those in desperate need of food as a result of the pandemic.

Mother Nature didn't play by the rules early on. Torrential rain at the start of the event dampened the excitement and limited the trash talk but, to the players' credit, the weather didn't deter them from the job at hand. Proof that the greatest don't become great without learning how to navigate adversity.

Within the first 30 minutes of the broadcast, more than $1.5 million in additional charitable donations had been raised.

Millions tuned in hoping to get inside the minds of the illustrious foursome. Woods and Mickelson are familiar foes, with Woods besting his compatriot over the majority of their respective careers. Manning went 6-11 against Brady during his time in the NFL.

The quarterbacks were nervous to start and found it difficult on one of the toughest courses in the country.

Woods debuted his signature Sunday red at his home golf course. He came into 'The Match' with hundreds of rounds at the private club under his belt, and his experience showed.

Woods' ease was delightfully juxtaposed by the play of the greatest quarterback in the history of American football, Tom Brady, who quickly became the focal point through the first nine holes.

The ultra-exclusive, and incredibly challenging, Medalist made the otherworldly quarterback look refreshingly human, as he struggled to find the fairway. Brady was the butt of the joke (quite literally when his pants split down the back) until the six-time Super Bowl winner holed-out from the fairway on the Par-5 7th hole in the greatest moment of the event.

To be fair, Brady has had less time to practice his swing than Manning, who is good friends with Woods and has played multiple rounds at the venue in the past.

Known for his maniacal preparation, Woods joked earlier in the week that Manning approached the contest like he was playing Brady and the rest of the New England Patriots, relentlessly sending Woods different videos of his game, asking for things to work on, and requesting drills from golf's greatest player to make sure he was ready to go.

The homework seemed to pay off, as Manning was masterful on the par 3's with his irons and stayed consistent for the majority of the day.

He used the cameras mounted to the players personalized golf carts to his advantage -- providing constant feedback and urging much needed dialogue between the competitors.

Later, Mickelson also proved to be a valuable coach to his teammate, walking him through each putt and trying to keep his confidence up while the NFL star struggled.

As expected, Charles Barkley was an asset to the broadcast, most notably in prompting trash talk between the foursome. His natural curiosity and affable personality brought the best out of the high-profile athletes.

"I've learned something through this pandemic, we need sports, man," Barkley told CNN last week. "Are they the most important thing in the world? Not even close. But the one thing they do, they take your mind off of all the other stuff going on in the world."

The back-nine featured an alternate-shot format and, after a beautiful drive off the tee on the par 4 11th from Mickelson, Brady finished the hole with an eagle putt to get the duo back in the game.

The pair punctuated their celebration with an "air high-five," a brief but stark reminder of why they were there in the first place -- to help those affected most by the coronavirus.

"There are so many people struggling all over the world. I was born in South Africa and I'm always paying attention to the events that are happening around the world, particularly in South Africa where I'm from," said 2008 Masters Champion Trevor Immelman, who was Barkley's co-analyst.

"This pandemic has been so brutal for so many people globally. I've always been struck by how Americans are willing to jump behind a charity. They are willing to jump in and raise funds for people that are struggling. It never ceases to amaze me how great Americans are at doing that. At the end of the day, you've got $10 million-plus dollars being raised in a single afternoon."

As millions of dollars continued to pour in from celebrity donations and corporate contributions, the rain came again midway through the back nine. In an engaging twist, it seemed to add to the drama, with the competitive fire between the four superstars burning brightest in the final few holes.

The intensity picked up on the par-3 16th, with a big putt from Mickelson cutting Woods and Peyton's lead to one. In the end, the event ended as many thought it might -- with the putter in Woods' hand on 18 to seal the win for him and Manning.

Despite less than ideal playing conditions, the broadcast found a way to showcase some great trash talk, highlight a strong competitive undertone, and raise a total of $20 million for charity. All things considered, the event was a rain-soaked success.

"Knowing that $20 million was raised is amazing," Manning told TNT after the event. "It was an honor to be invited to this, and it's something I will always remember and cherish."