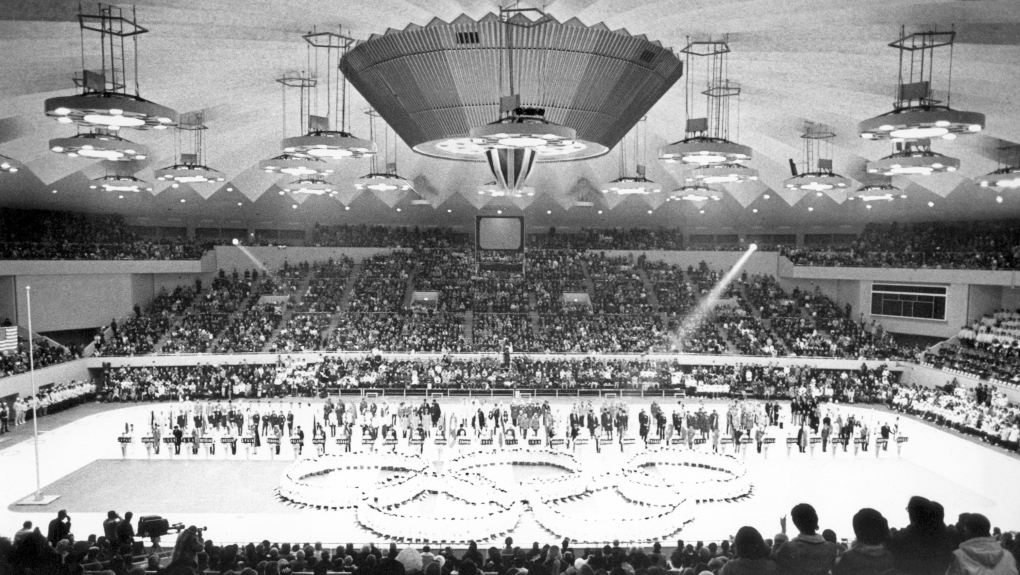 In this Feb. 13, 1972, file photo, Olympic rings in the center of the Makomanai ice arena is seen during the closing ceremony of the Winter Olympics, in Sapporo, Japan. (AP Photo)

TOKYO -- The president of the Japanese Olympic Committee said Tuesday that if Tokyo can pull off next year's Summer Games, then the city of Sapporo could be in good standing to hold the 2030 Winter Olympics.

Yasuhiro Yamashita, a former Olympic gold medallist in judo, acknowledged in a news conference that it will be difficult holding the Olympics next year. And he pointed out that nobody can know the state of the coronavirus pandemic in a few months or next year.

"We have heard many concerns about whether the Olympics and Paralympics can be actually held as well as suggestions for cancelling the games," Yamashita said. "We are currently going through the situation that nobody has ever experienced before and we would like to focus on what we should do now."

He added that if the Tokyo Olympics "are held successfully, then we can have a clear prospect for the possibility of hosting 2030" in Sapporo.

The marathons and race walks for next year's Olympics have been moved to Sapporo because of cooler weather. That will give the northern Japanese city a chance to show off to IOC officials.

Japan has already acknowledged its interest in 2030 but could get competition from Salt Lake City, or a Spanish bid linked to Barcelona and the Pyrenees.

Sapporo held the 1972 Winter Olympics, and Salt Lake was the host in 2002. Barcelona held the 1992 Summer Olympics.

Beijing will hold the 2022 Winter Olympics, followed in 2026 by the Italian cities Milan and Cortina d'Ampezzo.

Yamashita also said he backed proposals by the Tokyo organizing committee and the Switzerland-base International Olympic Committee to "simplify" next year's Olympics.

Neither the IOC nor local organizers have offered any specifics about what will be eliminated. They have said that sports events will not be cut, nor will the quota of 11,000 Olympic athletes and 4,400 Paralympians.

Estimates in Japan suggest the one-year delay will cost $2 billion to $6 billion, with most of the expense falling to Japanese taxpayers.

"We will not gain support from Japanese citizens unless we simplify the games and focus less on flamboyancy and concentrate more on efficiency," Yamashita said.