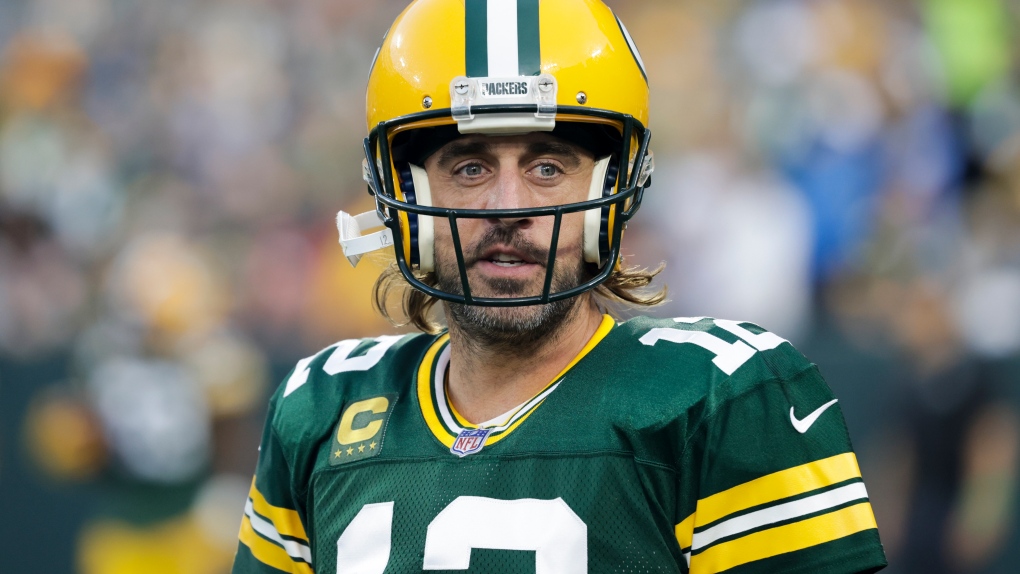 Aaron Rodgers isn't letting his toe injury lower his expectations even as it limits his practice time.

Rodgers threw two touchdown passes and also ran for a score in the Green Bay Packers' 36-28 victory over the Los Angeles Rams on Sunday. Not bad for someone who hadn't practiced all week.

“When I step on the field, I expect greatness,” said Rodgers, who says he fractured his pinky toe while working out during his quarantine after a positive COVID-19 test. “Anyone who's a great competitor feels the same way. I don't lean on excuses: not practicing, a little toe injury.”

Rodgers went 28 of 45 for 307 yards as the Packers bounced back from a 34-31 loss at Minnesota. The reigning MVP threw touchdown passes of 7 yards to Randall Cobb and 5 yards to A.J. Dillon.

His injury had caused him to practice just once in the week leading up to his 385-yard, four-touchdown effort at Minnesota.

“It definitely isn't the ideal situation not to practice,” Rodgers said. “But if I can go out there, take mental reps, go through the plan and my preparation and feel good about what I'm doing, and when I get out there, I've just got to rely on my instincts. The beauty is it's an 11-person-a-side game, and I really feel the offensive line allowed me just to settle in.”

The Rams outscored Green Bay 11-0 in the fourth quarter, but their comeback attempt ended when Adrian Amos recovered an onside kick with 17 seconds left.

Green Bay (9-3) has never lost consecutive games within the same season during Matt LaFleur's three-year coaching tenure. The Packers head into their off week with a 3 1/2-game lead over Minnesota (5-6) in the NFC North.

The Rams (7-4) dropped their third straight game and continually made mistakes to create scoring opportunities for Green Bay, which scored 16 points off three Los Angeles turnovers.

“Pretty self-explanatory, kind of a lot of the same narratives,” Rams coach Sean McVay said. “We turn the ball over too many times. You can't get behind against a good football team like that. I do love the way that our guys continue to battle.”

Matthew Stafford went 21 of 38 for 302 yards with three touchdown passes. But he also lost a fumble to set up a touchdown and had an interception returned for a touchdown. Stafford has thrown a pick-6 in each of the last three games.

Odell Beckham Jr. had five catches for 81 yards with a 54-yard touchdown in his second game as a Ram.

Rodgers opened the scoring and put the Packers ahead for good with a 1-yard touchdown to cap a drive that began at the Rams 6-yard line. Green Bay's Rashan Gary, coming back from an elbow injury that sidelined him last week, sacked Stafford and hit the quarterback's elbow to cause a fumble that Preston Smith recovered to give the Packers first-and-goal.

In the third quarter, Los Angeles' J.J. Koski was returning a punt when Dominique Dafney forced a fumble that Krys Barnes recovered at the Rams 27. That turnover set up Mason Crosby's 29-yard field goal that extended Green Bay's lead to 30-17.

“We're going to continue to learn from these things, that's the only thing that you can do,” McVay said. “But we've got to stop with some of these self-inflicted wounds.”

Later in the third, Rasul Douglas made it 36-17 by stepping in front of Stafford's pass to NFL receiving leader Cooper Kupp and scoring his first career touchdown on a 33-yard interception return.

“Cooper Kupp, don't he got like 10,000 yards receiving already in like eight weeks?” Douglas quipped after the game. “We know that's his guy. We know a lot of balls get thrown to him and he makes a lot of plays.”

This time, Douglas and the rest of the Green Bay defense made all the biggest plays.

Rams: Koski hurt his hamstring in the second half.

Packers: Cobb didn't play the second half due to a groin injury. Cobb caught four passes for 95 yards in the first half. ... Packers CB Kevin King didn't play because of injuries to his knee and hip. ... S Darnell Savage walked slowly to the sideline after taking a hard hit on the onside kick.

The Packers honored former defensive back Charles Woodson during a halftime ceremony. Woodson's name has been placed on the Lambeau Field facade to honor his induction into the Pro Football Hall of Fame.

Woodson played for the Packers from 2006-12 and was the NFL Defensive Player of the Year in 2009.

A moment of silence was held before the game to remember the victims of the parade crash in the Milwaukee suburb of Waukesha, Wisconsin. Six people were killed and more than 60 were injured when an SUV crashed into a Christmas parade on Sept. 21. Darrell Brooks Jr., 39, has been charged with five counts of first-degree intentional homicide.