Titans back to waiting after NFL postpones game vs. Steelers 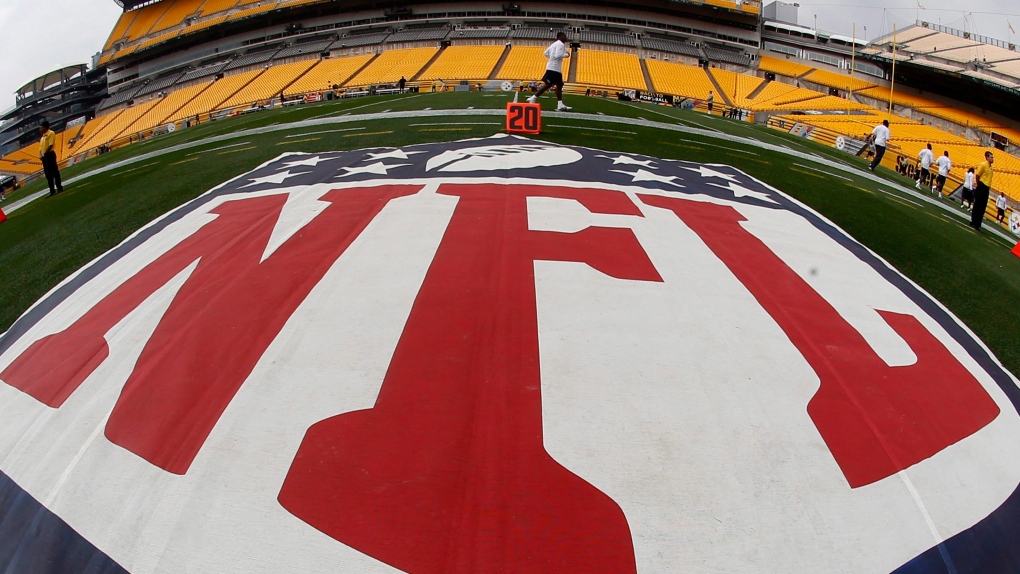 In this image made with a fisheye lens, the NFL logo is displayed on the sideline of Heinz Field in Pittsburgh on Sept. 8, 2013. (AP/Keith Srakocic)

NASHVILLE -- The Tennessee Titans find themselves back in a waiting mode, hoping the NFL allows them back inside their headquarters by Tuesday.

Their game against the Pittsburgh Steelers is now postponed until later in the season because of the league's first COVID-19 outbreak.

The NFL postponed Sunday's game in Nashville after one additional Titans player and one personnel member tested positive for COVID-19. The announcement Thursday morning came a day after the league said it hoped to play the game either Monday or Tuesday. The NFL said a new game date will be announced "shortly."

Coach Mike Vrabel informed his Titans of the newest positive tests and the NFL's decision to postpone the game at a team meeting Thursday morning. That puts Tennessee -- and Pittsburgh -- on a bye week several weeks ahead of schedule.

Vrabel said they hope to allowed back inside their building Monday or Tuesday.

"I told them to try to mentally recover from an emotional few days, so that we can proceed with our season, build on a 3-0 start," Vrabel said.

When the Titans are allowed back inside their facility depends on the daily testing results. They had one positive test last Saturday with outside linebackers coach Shane Bowen, which prevented him from travelling with Tennessee to Minnesota for a 31-30 win. The Vikings returned to work at their facility Thursday.

The Titans are scheduled to host Buffalo (3-0) on Oct. 11 depending on the results of daily testing.

On Tuesday, the Titans (3-0) placed three players on the reserve/COVID-19 list, including key players defensive captain and lineman DaQuan Jones and long snapper Beau Brinkley. Outside linebacker Kamalei Correa became the fourth on that list Wednesday.

With the two new cases, the Titans' total is now 12: five players and seven other organization members since last Saturday. Vrabel said he's very confident the Titans have followed the contact tracing protocol to identify anyone at risk from being close together.

"So we'll see what happens tomorrow when we get those results back," Vrabel said.

The NFL decided to postpone the game "to ensure the health and safety of players, coaches and game day personnel." The league also said the Titans cannot have any in-person activities until further notice with the facility remaining closed.

Vrabel said the Titans also likely will have some new protocols to follow once they get back into the building. He did not elaborate.

The Titans already had a couple players on the reserve-COVID-19 list, with defensive back Greg Maybin, who was signed to the practice squad Sept. 21, added to that list Sept. 24. Vrabel said Mabin left the building and went into quarantine once his positive test came back.

Vrabel said some of those who tested positive haven't had any symptoms, while others have had some flu-like symptoms. Vrabel, who said Wednesday he was not among those testing positive, declined Thursday to single out anyone specifically, but said people were starting to feel better.

Now the NFL has to figure out how to reschedule a game between two of its seven undefeated teams after the league's first COVID-19 outbreak of the coronavirus pandemic.

The simplest scenario for rescheduling is Week 7 on Oct. 25. That's the Titans' bye. Pittsburgh is scheduled to play at Baltimore that week, but both the Steelers and Ravens have byes in Week 8, allowing the NFL to make a change affecting only one other team.

Both Vrabel and Pittsburgh coach Mike Tomlin said they had an idea of what the new date could be. For now both the Titans and Steelers went from game preparation to an unexpected bye and a chance to heal up some players.

Unlike other seasons, players must stick around for daily testing to avoid the need for quarantine returning from a trip. Vrabel said he thinks his players will deal with this well.

"They'll handle it with professionalism, with understanding and a compassion towards not only ourselves and those people that have been affected, but also Pittsburgh, the Steelers that were preparing for a game and now will have their schedule changed as well," Vrabel said.

The Steelers had been scheduled to practice Thursday and now their next opponent will be Philadelphia on Oct. 11. Tomlin called it the nature of the environment in 2020.

"We're just adjusting accordingly," Tomlin said. "But there's disappointment, no question. We've worked extremely hard at the beginning portion of this week in preparation for what we thought was an opportunity versus an undefeated team in their venue and so you lean in on those opportunities."

The Titans, who played in the AFC championship game in January, and the Steelers, revived with quarterback Ben Roethlisberger back now, may be playing without a break through the rest of the regular season.

"I was part of a team in 2001 that after the 9-11 incident played 14 straight games and won the Super Bowl that year," Vrabel said.