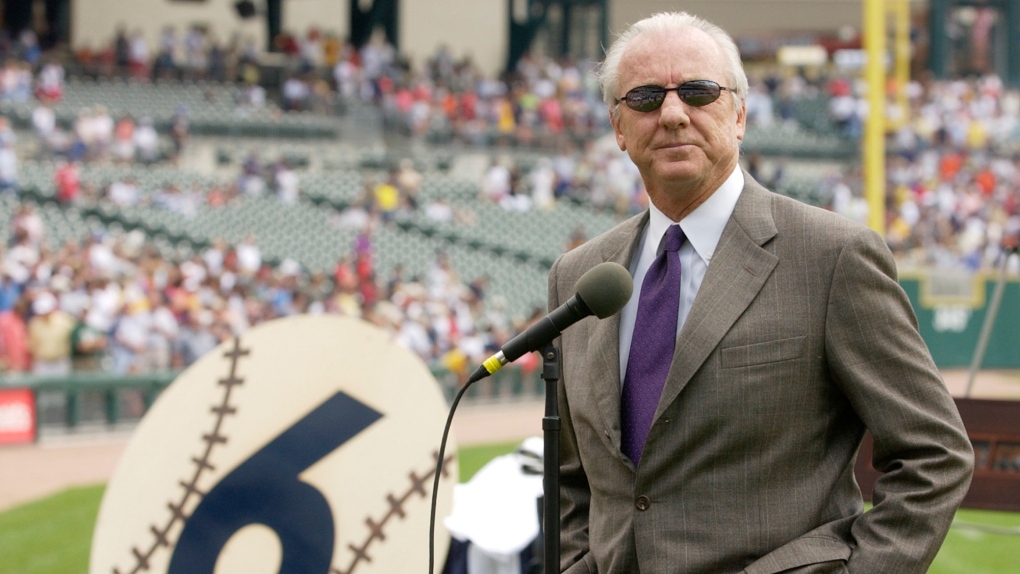 In this Aug. 25, 2002, file photo, Detroit Tigers Hall of Famer Al Kaline is honored for his 50 years with the Tigers organization at Comerica Park in Detroit. (AP Photo/John F. Martin)

DETROIT -- Al Kaline, who spent his entire 22-season Hall of Fame career with the Detroit Tigers and was known affectionately as "Mr. Tiger," died Monday. He was 85.

John Morad, a friend of Kaline's, confirmed to The Associated Press that he died Monday at his home in Michigan. Morad, who spoke first to the Detroit Free Press, said he'd been in contact with Kaline's son. No cause of death was given.

Kaline was the youngest player to win the American League batting title in 1955 at age 20 with a .340 batting average. The right fielder was a 15-time All-Star, won 10 Gold Gloves and was elected into the Hall of Fame in 1980 in his first year of eligibility.

The beloved No. 6 later sat behind a microphone as a Tigers broadcaster from 1976 to 2001 and was also a special assistant to the general manager.

Kaline came straight out of Baltimore's Southern High School to the majors, making his debut on June 25, 1953 -- six days after being signed by Tigers scout Ed Katalinas. He took over as Detroit's everyday right fielder in 1954, and in 1955 he hit .340, becoming the youngest player -- besting Ty Cobb by a day -- to win the American League batting title.

Kaline never hit 30 home runs in a season and topped the 100-RBI mark only three times, but his overall consistency at the plate and his exceptional fielding and throwing put him among the top AL outfielders.

"There have been a lot of great defensive players. The fella who could do everything is Al Kaline," Baltimore Orioles Hall of Famer Brooks Robinson once said. "He was just the epitome of what a great outfielder is all about -- great speed, catches the ball and throws the ball well."

Kaline finished his career with 3,007 hits and 399 home runs (what would have been No. 400 was lost to a rainout). He scored over 1,600 runs and drove in nearly that many. He got his 3,000th hit back in Baltimore, slicing a double down the right field line in September 1974, his final season.

Kaline hit .379 in the Tigers' victory over St. Louis in the 1968 World Series, when Detroit rallied from a 3-1 deficit.

"If there is one accomplishment for which I am particularly proud it is that I've always served baseball to the best of my ability," Kaline said during his Hall of Fame induction speech. "Never have I deliberately done anything to discredit the game, the Tigers or my family.

"By far, being inducted into the Hall of Fame is the proudest moment of my life. You can be sure that I will make every effort to live up to the obligation associated with this honour."

Later that year, his No. 6 became the first number retired by the Tigers.