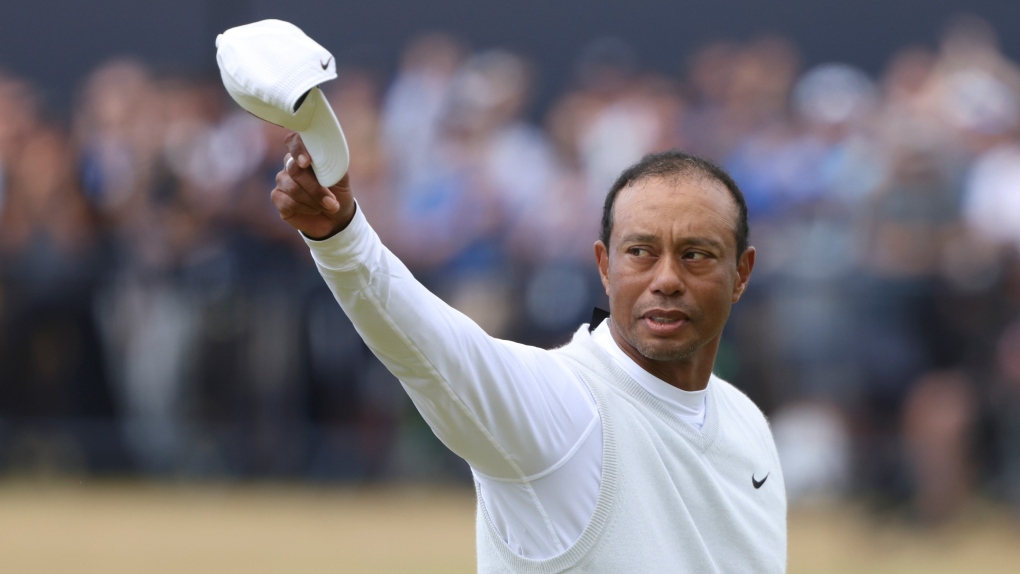 Tiger Woods of the U.S. gestures to the crowd at the end of his second round of the British Open golf championship on the Old Course at St. Andrews, Scotland, Friday July 15, 2022. (AP Photo/Peter Morrison)
WILMINGTON, Del. -

The PGA Tour is in Delaware for the first time and the buzz still surrounded Tiger Woods, even if he didn't have clubs and wasn't even at the golf course.

Woods flew to Wilmington on Tuesday afternoon for a private meeting of top players to discuss the threat of Saudi-funded LIV Golf, according to two people aware of the plans at the BMW Championship.

They spoke to The Associated Press on condition of anonymity because of the privacy of the meeting. One person invited to the meeting said it was to get on the same page against LIV Golf, along with taking more ownership in the direction of the PGA Tour.

That meeting led to a previously scheduled Player Advisory Council meeting being moved back an hour or so to later Tuesday afternoon. Woods flew up from his home in Florida with Rickie Fowler, who didn't qualify for the second FedEx Cup playoff event.

The meeting was held away from Wilmington Country Club at a hotel, according to another person aware of the details. PGA Tour Commissioner Jay Monahan was not invited.

"There is a player meeting, but that's all I can tell you about that," Jon Rahm said.

Monahan met with the players informally last week following a hearing in which a federal judge denied a request by three LIV Golf players seeking to play in the PGA Tour postseason.

He also met with the players a week after the U.S. Open to details plans for big increases in prize money on the PGA Tour, qualifying changes and a new schedule that will return to a January start to the season in 2024.

"I'm not sure what, if anything, will change, what will be the result of it," Patrick Cantlay said. "I think it's good that a lot of the players are getting together to discuss the situation out here, especially given the current circumstances."

Woods has been a strong opponent of LIV Golf. The rival league's leader, Greg Norman, confirmed in an interview with Fox News last month that Woods was offered in the range of $700 to $800 million to take part. Norman said that was before he was hired to run LIV Golf.

Norman and Woods have never been close, going back to when Woods arrived on the PGA Tour and instantly became the biggest star golf had seen in generations.

Woods was particularly forceful at the British Open last month when he said of Norman not being invited to festivities around the 150th Open, "Greg has done some things that I don't think is in the best interest of our game."

He said he disagreed with players getting enormous signing bonuses to defect to LIV Golf, saying they have turned their backs on the tour that made them famous.

The PGA Tour has reacted to the depth of Saudi funding with a $50 million bonus pool called the Player Impact Program that pays 10 leading players based on how much attention they get. Some players, such as Cantlay, the defending FedEx Cup champion, don't like the program.

Also in the works is a series of overseas tournaments at the end of the year that will reward the top performers. The tour hasn't announced set details or a sponsor.

LIV Golf has played three events offering $25 million apiece in prize money to a group of players that include Dustin Johnson, Brooks Koepka, Phil Mickelson and Bryson DeChambeau. It resumes its eight-tournament schedule after the FedEx Cup ends next week.