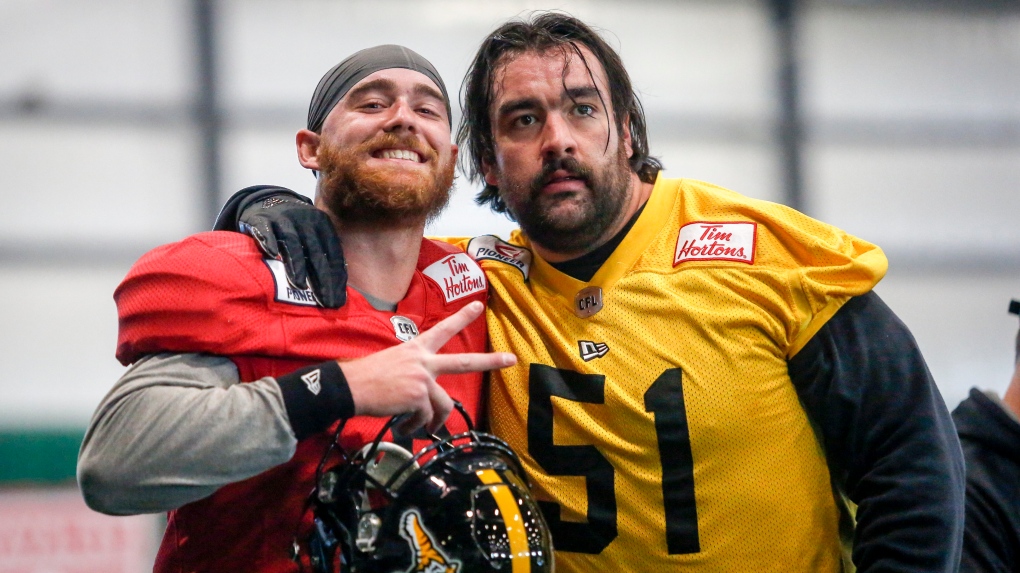 CALGARY -- The Hamilton Tiger Cats have racked up an impressive offensive record in 2019, but the team's head coach says it's the defence that has become the "heartbeat" of team.

Orlondo Steinauer's club has the best offensive record in the CFL this season but as he prepares for the Winnipeg Blue Bombers in Sunday's Grey Cup final he told reporters in Calgary Wednesday that his defence is up to the task.

"It's not just about being a great defence statistically. To me we were middle of the pack early in the year. What it became was timely plays," Steinauer said.

"Whatever it's taken that week to win they've stepped up and made those plays and to me that's impressive. The defence at times has been the heartbeat of our team."

Hamilton bolstered the defensive line in the off-season with the free agent signing of Ja'Gared Davis, who spent three previous seasons with the Calgary Stampeders and won a Grey Cup ring last year.

"This Grey Cup is going to make four in a row. The biggest thing I'm telling the guys is just to treat it like it's another game," he said.

"Do the same thing we did on day one or day 100 because that's what got us here. Don't try and change anything different now."

Davis led the Ticats with 13 sacks during the regular season in addition to 54 tackles.

Teammate Simoni Lawrence said Davis is the best linebacker in the CFL.

"It's not close if you really watch film about it. There's a lot of great defensive ends in the league but you've got pass rushers, you've got guys who do other things but what makes Ja'Gared so great is he's a football player who plays defensive end," Lawrence said.

"He can rush the passer, he can stop the run. I mean it's not close."

Davis said he still has a lot of friends and fond memories from his time in Calgary, but the move to Hamilton was a lot easier than one might expect.

"Honestly when I got here I was leaving Calgary and walking into Calgary 2.0 so to speak for the defensive line, so it was easy for me," Davis said.

"It wasn't like I was even stepping into a leadership role. I was just coming in and trying to fit in because I had great leaders already on the team."

Davis says the defence isn't the heart of the team -- it's just one part.

"I feel we are intricate parts of a heart. Defence is the left valve, offence is right valve and the special teams is the left and right atriums. Together we work as one cohesive unit."

Lawrence said Steinauer has been the prime motivator for the Ticats all season.

"He doesn't waver. Consistency is key especially playing football because you get a lot of smoke and it's easy to fall in the smoke," he said.

"When you've got somebody like Coach Orlondo who keeps the message clear, the same all season long...you end up here."