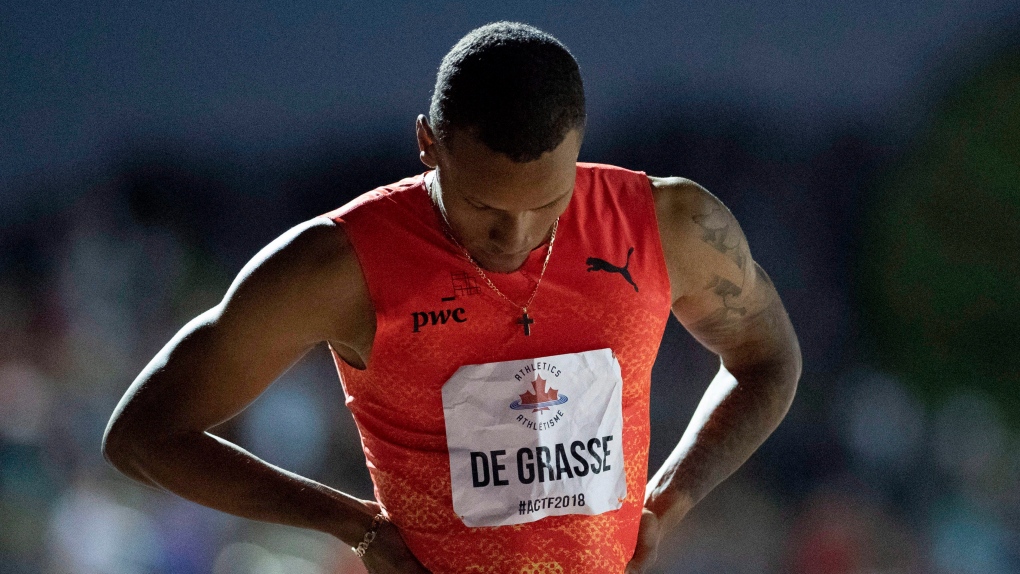 Andre De Grasse looks on after competing in the senior men's 100 meter dash at the Canadian Track and Field Championships in Ottawa on Friday, July 6, 2018. THE CANADIAN PRESS/Justin Tang

OTTAWA -- Sprint star Andre De Grasse was looking stronger than he had all season, cruising to what looked like an easy win in his 200-metre semifinal Saturday at the Canadian track and field championships.

But with about 30 metres to go, De Grasse slowed to a walk after he felt a "little grab" in his right hamstring.

The 23-year-old from Markham, Ont., will have an MRI on Sunday, and he's hoping it's not as severe as the right hamstring strain that sidelined him for last summer's world championships.

"I'm not too sure what happened, I think it was just a cramp hopefully," De Grasse said. "I think I ran a good 150 and then all of a sudden it just surprised me. But hopefully I can come back from it, find out a little bit more information (Sunday)."

The three-time Olympic medallist had a late start to the season because of his hamstring injury, but looked solid in Friday's night 100 metres, racing to third place in 10.20 seconds. He believed a victory was in reach in the 200.

"Yeah, it's a little bit (frustrating)," De Grasse said. "I felt like I was about to run a fast time, I felt pretty good in the warmup, and then all of a sudden that happened. But it's part of the game, you win some you lose some, and you've just got to take your losses and come back strong and try to make the best of it."

Friday night's dramatic 100 final saw the first six sprinters finish within a tenth of a second.

"I think the 100 metres being what it was, that late (9:30 p.m.), and having to really push in that race, for all the athletes, obviously running two solid rounds in the 100, and then coming back the next afternoon and running a 200, you've got to really make sure you're doing the right things," said Canada's head coach Glenroy Gilbert.

De Grasse agreed that Friday's two rounds of the 100 might have been a factor.

"It's probably my first time since last year kind of doubling up and running races back to back like that, so maybe it could have had a little bit of an effect," he said.

"I thought he battled really well in the 100 final, and he put a lot of effort into that, and I think the velocity that he put his body through obviously affected what was going on today," McMillan said. "He almost certainly hadn't ran that fast in a long time. That's a pretty significant load on your system."

Now another hamstring injury threatens the rest of his season.

De Grasse turned and gave a wave to the crowd when he walked across the finish line favouring his right leg, but after receiving treatment at the stadium he was walking well without much of a limp.

De Grasse said if there's a silver lining to his rocky season, it's that there are no world championships or Olympics.

The sprinter isn't the only high profile Canadian track athlete having a rough season. Derek Drouin won't compete this season because of a bulging disc in his neck, while pole vaulter Alysha Newman missed nationals with a partly torn patellar tendon. Melissa Bishop, a world silver medallist in the 800 metres, took the season off to have a baby. Her daughter Corinne was born Monday.