Team Canada unveiled ahead of Invictus Games in Toronto 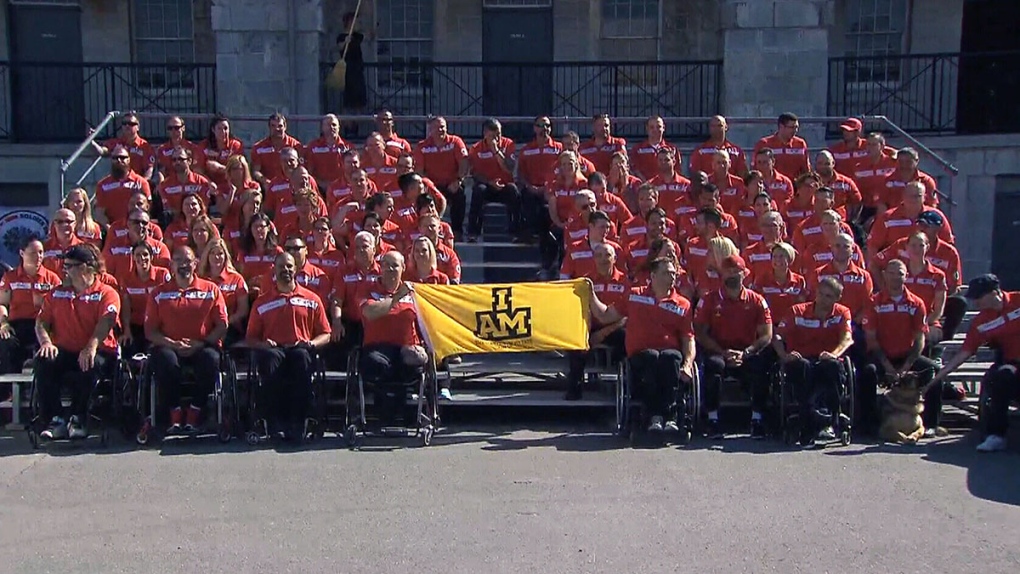 Canada's team for the Invictus Games in Toronto is revealed in Kingston, Ont. on Thursday, June 15, 2017.

The 90-member team of injured military personnel and veterans representing Canada at the upcoming Invictus Games in Toronto was unveiled just as tickets for the international sporting event went on sale.

With only 100 days left until the 2017 Invictus Games in Toronto kicks off, the countdown is officially on for the highly-anticipated international competition honouring injured military personnel and veterans in the name of sport.

Brig.-Gen. Shane Brennan, commanding officer of the Joint Personnel Support Unit and head of the mission for Team Canada, introduced the 90-strong team of Canadian Armed Forces members and veterans at a ceremony in Kingston, Ont. on Thursday.

He praised the members for confronting their own challenges to participate in the games and reminded them that they’re not alone in the journeys to recovery and rehabilitation.

“Each of them has come up against a moment in their life that has irrevocably changed them. They have all struggled through various stages of recovery,” Brennan said. “They have all adapted to a new normal. They have all made the decision to overcome their challenges and now they do soldier on.”

It’s a challenge that retired sergeant Nic Meunier is familiar with. He lives with severe mobility issues after suffering more than 20 injuries in his military career. Most recently, a cancer diagnosis and the resulting radiation treatment weakened his legs to the point that he relies on mechanical splints to walk.

For Meunier, the games are a form of therapy.

“The best medicine is sports because when you do sports, that balances all the chemistry inside your brain, so you sleep better, you feel better,” he told CTV News.

Steve Daniel, a former paratrooper, was paralyzed from the waist down after a training accident. After the injury, he struggled with a sense of lost identity as a soldier.

The Invictus Games, Daniel says, helps bring soldiers back into the fold.

“Everyone still has that military mindset, so there’s a lot of humour and a lot of joking and a lot of mutual support,” Daniel said.

Canadians eager to cheer on and support the games’ military families will now have the opportunity to purchase tickets starting at 10 a.m. ET. The events will be held at various venues across Toronto from September 23 to 30. Spectators can purchase tickets online or at the venues on the day of the session.

This year’s games will see approximately 550 competitors from 17 countries come together to compete in 12 adaptive sports including, sitting volleyball, archery, cycling, rowing, swimming and for the first time ever, golf.

Prince Harry created the multi-sport competition in 2014 as a way to celebrate injured, ill and wounded service men and women and veterans.

According to the Invictus Games website, the events are meant to “inspire recovery, support rehabilitation and generate wider understanding of and respect for those who serve their country, and their loved ones.”

Co-captain of Team Canada, Maj. Simon Mailloux, told CTV’s Your Morning on Thursday what the games mean to him.

“It’s just such a privilege to be able to serve Canadians. I’ve had the privilege of serving twice in Afghanistan for them and coming back from an injury,” Mailloux said. “The Invictus Games is an opportunity for us to showcase our rehabilitation, what we’ve accomplished to Canadians.”

Mailloux lost a leg while he was in Afghanistan. He will compete in the track and field and sitting volleyball events at the Toronto games.

Michael Burns, the CEO of the Invictus Games Toronto 2017, said organizers are feeling confident about their preparedness for the games and the enthusiasm among Canadians.

“I think it will be important to all Canadians to really use this as an opportunity to show our gratitude, our support for our military families in a way that we’ve never been able to do before on this size and scale,” Burns said.

Team Canada began training for the games at a camp in Victoria, B.C. in March and are halfway through their training at another camp in Kingston, Ont. Mailloux said the training sessions have been an important step in the road to recovery for some of the members.

“For some of the competitors, the camps we’re doing right now is the first time they’re getting out of the house,” he explained. “They’re going to be on the starting lines at the games and just to be there is a good achievement.”

Burns said more than 6,000 Canadians volunteered to work at the games within two weeks of their public call for volunteers back in November when they only needed 2,000 volunteers.

“I think that’s a data point that really shows that Canadians are behind these games and are behind our military families and really want to get involved,” Burns said.

With a report from CTV's Kevin Gallagher