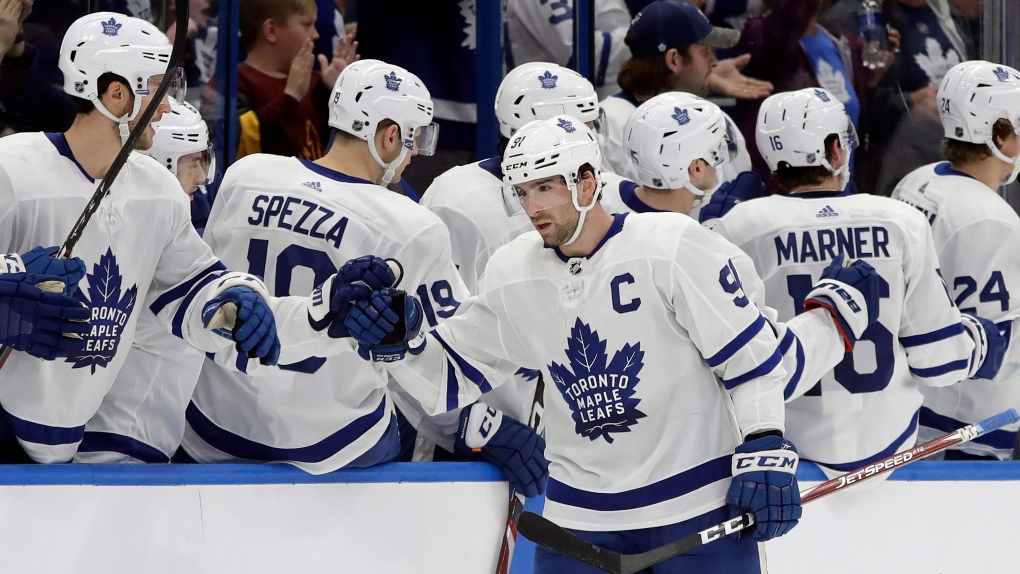 In this file photo, Toronto Maple Leafs center John Tavares (91) celebrates with the bench after his goal against the Tampa Bay Lightning during the second period of an NHL hockey game Tuesday, Feb. 25, 2020, in Tampa, Fla. (AP Photo/Chris O'Meara)

TORONTO -- John Tavares lived in New York and his wife has worked in a hospital.

As the reality of the COVID-19 pandemic started to settle in the last few weeks -- desperate calls for medical supplies, heart-wrenching personal stories, social distancing, self-isolation -- the captain of the Toronto Maple Leafs wanted to help.

Along with the city's other sports franchises, Leafs players had already made sure arena/stadium staff were taken care of through the Team Toronto fund as leagues across North America suspended their seasons amid the crippling novel coronavirus outbreak.

But after chatting with teammates, Tavares felt they needed to do something for the doctors and nurses on the front lines battling a disease that's already killed thousands of people around the world.

"Everything they're sacrificing and the risks that they're taking ... it's very moving and it's very heroic," the 29-year-old centre said in phone interview with The Canadian Press. "At times it's hard to find the words.

"It's a real challenge, but they're doing everything they can to help everyone they can fight this virus and get things back to normal."

With that in mind, Tavares and a group of Leafs have donated an undisclosed amount of money to support front-line workers at two hospitals in the Toronto area -- Trillium Health Partners and Mount Sinai Hospital.

The players handed the funds over to the hospitals' respective foundations to distribute as each saw fit.

"It was great the way guys came together with this initiative," Tavares said. "We've seen through many other sports, many other athletes trying to find ways to help any way they can."

In the case of Trillium Health Partners, where Aryne Tavares worked as a physiotherapist before the couple's first child was born in September, that means a free post-shift meal for each of the 10,000 front-line employees at the hospital's three campuses in Mississauga, Ont.

"We asked our front-line workers, 'What are some of the most significant needs you have?"' Trillium Health Partners Foundation president and CEO Caroline Risboro said. "There's a lot of discussion about personal protective equipment, but they're also working exceptionally long hours.

"They're having trouble getting to the grocery store to feed their families. It's one more added pressure amidst a whole lot of other pressure."

Each worker will receive a gift card from food-delivery service Uber Eats -- a move that also helps with social distancing.

"We've had a lot of folks come forward and they say, 'I want to do something,"' Risboro said. "But it's challenging to do that for 10,000 people. This donation is allowing us to do that."

Mount Sinai Hospital in downtown Toronto, meanwhile, went a different route, choosing to deploy the money on an emergency room training simulation during the COVID-19 pandemic for workers across the city.

It's also expected to benefit intensive care unit teams that are used to performing standard intubations on patients, but can longer do so because of the risk of disease transmission.

"When a global pandemic like COVID-19 strikes, everybody is a rookie," Sinai Health Foundation CEO Louis de Melo said in a statement. "Every medical professional can benefit from simulation training."

Both foundations have links on their websites for donations that go directly to front-line workers.

Tavares, who played nine seasons with the Islanders prior signing a seven-year, US$77-million contract to come home to the Toronto in July 2018, said the outbreak hits close to home personally because of the tragedy unfolding in New York City.

"I know so many people there," he said of the disease's current epicentre. "People I interacted with every day."

Tavares, who registered 26 goals and 60 points in 63 games in 2019-20, has been sticking to a routine since the NHL pressed pause March 12. He's doing a lot of cooking, trying his best to stay in shape, taking advantage of the time with his young family, and going over video from the Leafs' up-and-down first 70 contests in hopes the season eventually resumes.

The break has also given him renewed perspective.

"It shows how equally vulnerable we all are, no matter what you've done in your life or what kind of success you've had or whatever you do for a living," Tavares said. "It also shows how important it is that we come together as human beings to do whatever we can to help."

Like what he and some teammates decided on with their donation.

"It's a simple act," Risboro said. "But it's amazing how much impact this has with our front-line workers."

This report by The Canadian Press was first published April 10, 2020.

Quebec schools, daycares could reopen before May 4: Legault

Lessons from Trappist monks in a time of quarantine

A Canadian doctor's plea as crisis worsens: 'We need the equipment now'

Father says Boris Johnson likely out of action for a while

'Salad with no dressing': Privileged Kuwaitis complain about five-star quarantine