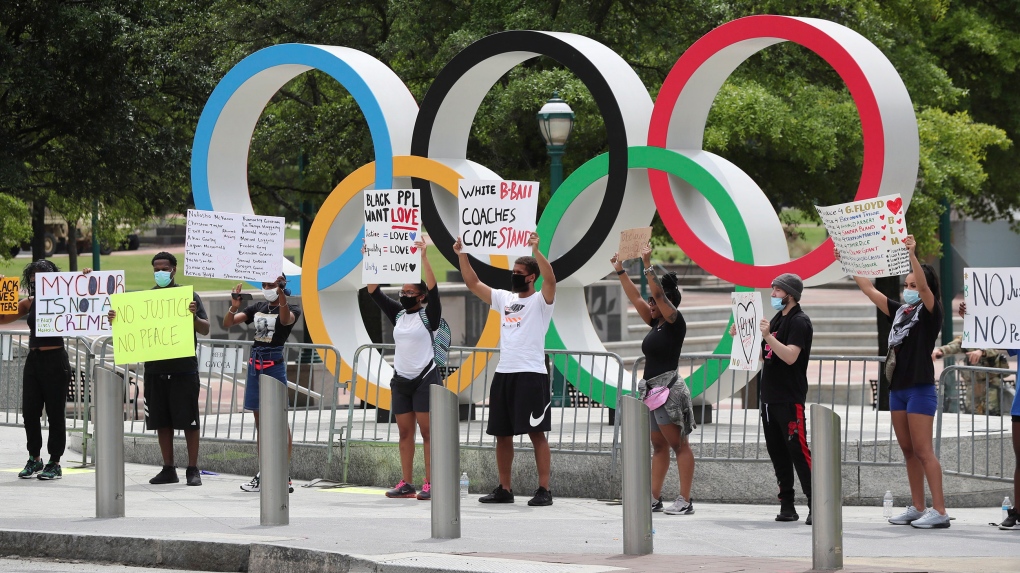 Protesters begin to form a line of solidarity around Olympic Park, Wednesday, June 3, 2020, in Atlanta, during a sixth day of protests over the death of George Floyd, a black man who was killed while in police custody in Minneapolis on May 25. (Curtis Compton/Atlanta Journal-Constitution via AP)

TORONTO -- After a wave of demonstrations against racial injustice around the world, the International Olympic Committee is in talks with athlete groups about potentially easing protest bans at the Olympic Games.

But the majority of Canadian Olympic athletes surveyed believe that protests should not be permitted on the medal podium or elsewhere on the field of play.

The IOC opened talks with athlete groups in June around Rule 50, which outlaws “any kind of demonstration or political, religious or racial propaganda” in competition areas or on the medal podium, and the Canadian Olympic Committee Athletes Commission (COC AC) released its seven recommendations to the IOC on Monday.

Nearly 80 per cent of athletes surveyed want to keep protests off the field of play. Thus one of the recommendations is: “Maintain and/or establish neutral or protected spaces that allow for a peaceful demonstration that do not interfere with competition.”

“The feedback from athletes was that they didn't want it to interfere with the competition itself, so ensuring that the competition itself was protected,” said two-time Olympic trampoline champion Rosie MacLennan, an athletes commission vice-chair. “Because that ultimately is what athletes strive towards, and they want to have the opportunity to compete without, I guess, interference.”

The COC AC polled athletes, both current and retired, through a survey, a webinar and one-on-one conversations.

Seyi Smith, vice-chair of the athletes commission and a retired sprinter and bobsledder, said there are no easy answers.

“This whole process has been pretty mentally exhausting, I've gone back and forth on both sides of this where I've been super for and super against, and right on the fence,” Smith said.

The most famous Games protest was in 1968 when American sprinters Tommie Smith and John Carlos, who are Black, raised their fists on the medal podium.

At the 2019 Pan American Games, a pair of American athletes angered the IOC with their medal podium protests. Track athlete Gwen Berry raised a fist while fencer Race Imboden took a knee.

In January, the IOC doubled down on Rule 50, issuing guidelines around what it considers protest versus political expression.

But cries to ban Rule 50 have grown louder.

“Why not allow athletes to be humans first, athletes second, and freedom of expression is a basic human right,” said Montreal's Rob Koehler, the director general for Global Athlete, an international athlete-led movement launched in 2019.

“The IOC must allow them to use their voice. That's the biggest problem in sport, we see all the sexual abuse, the physical abuse, the fear of retribution, all the things happening in sport is because athletes are afraid to speak out. Because they're not given those platforms.”

The NBA set a new standard for civil disobedience in sport when the Milwaukee Bucks refused to play after the police shooting of Jacob Blake, a Black man, in Wisconsin. The walkout swept across other leagues with cancellations in the WNBA, MLB, MLS and NHL.

“Athletes believe in social causes. They want to make the world a better place. And they want to speak up against social injustice and surely we should be allowing them to use the platforms. And I think the NBA has done a wonderful job. Putting the 'Black Lives Matter' on the floor, allowing the players but messages on the back of the jerseys, it didn't take away from the game. And it really raised the issues of what athletes are standing up for.”

Smith, however, said it's unfair to draw a direct parallel between the NBA and the Olympic Games.

“(NBA players) tend to be a little bit more uniform in culture,” said Smith, who was a member of Canada's 4x100 relay that celebrated bronze at the 2012 Olympics before being disqualified moments later for a lane violation.

“Not that they're all Americans. But it's nowhere near as culturally diverse as an Olympic Games. More countries are part of the IOC than signatories to the United Nations.”

Canadian lawyer and longstanding IOC member Dick Pound it would be “inarticulate” for athletes to take a knee at the Olympics.

“If somebody takes a knee, you'll never know if you're watching on TV or from the stands if it's actually about racial discrimination or about fluoride in the water,” Pound told Internet publication Around the Rings. “There's a time and a place for everything. You have all kinds of human rights and you don't go shouting about those things at a church service or at a funeral.”

Pound said athletes can “wait five minutes until the end of the ceremony and go to the press conference and say whatever you want.”

MacLennan suggested a space for demonstrations in the athletes village that would be open to the media.

Another COC AC recommendation was to establish parameters for an acceptable demonstration that is peaceful and respectful of other athletes and countries.

One concern raised is abolishing Rule 50 benefits some countries more than others. A North American athlete might be celebrated by for a podium protest, while athletes from other countries could face being ostracized, or even death threats, for demonstrating.

Ethiopian marathoner Feyisa Lilesa raised crossed fists as if they were shackled to protest his government at the 2016 Rio Olympic finish line. He lived in exile before finally being allowed to return to Ethiopia in 2018.

Iranian wrestler Navid Afkari was executed earlier this month for protesting against the regime during the 2018 unrest in Iran. He allegedly murdered an undercover security guard, but said he was tortured into making a false confession. Global Athlete is among groups calling for the IOC and the United World Wrestling to bar Iran from all international competition.

An athlete could be forced to surrender a medal or have results erased for an Olympic protest.

Koehler said the rules are so ambiguous, protests could be dealt with on a case-by-case basis.

“If there's a high-profile NBA or WNBA player protesting, the likelihood of the IOC banning them would be very minimal, because they have resources and financial resources behind them to back up any type of consequence,” he said. “But if it's a lower-level athlete, that's not a well-resourced athlete - which is the majority of them - they'll throw the book at them.”

“That's kind of what we're trying to do here, so regardless of whether you're LeBron or Seyi, regardless of what we protest about, what happens afterwards should be applied equally, because we're both athletes as the Games,” he said.

The COC AC's recommendations to the IOC include defining what constitutes a demonstration, protest, or propaganda, and establishing provisions for what's an acceptable demonstration based on values and principles of Olympism.

MacLennan said whether or not she'd support an athlete protest in her event, she said it's “a complicated answer. There's no simple answer.”

“If you ask any athlete, including myself, it really depends on what the athlete is demonstrating for, or protesting for or against, that I think would really influence the sentiment of what other athletes believe and feel about it,” said MacLennan, who will aim for her third Olympic title in Tokyo next summer.

Response from athletes has been mixed so far. In June, a group of American athletes on the U.S. Olympic & Paralympic Committee's advisory council, led by Carlos, called on the IOC to abolish Rule 50.

The Australian Olympic Committee's athletes commission conducted a survey, with similar results to Canada - 80 per cent said they believe podium protests would detract from the Games.

The COC AC polled 110 athletes through its webinar, 104 athletes in over 35 sports in an online survey, plus had one-on-one conversations with over 50 athletes, including national sport organization athlete reps.

While Smith said comparisons can't be made between the Olympics and NBA, he was impressed both with NBA commissioner Adam Silver and the players.

“They got organized, they sat down with the management and they came out with something that had an impact,” he said. “Everyone's talking about it. Everyone's aware of it.”

Canadian sprinter Aaron Brown said he was inspired by how “not just the NBA and the WNBA, but the rest of the sports world protested in solidarity to shine light on an injustice.”

“It goes to show the power that the athlete platform wields and how the level of awareness that can come out of the athlete activism is invaluable,” Brown said. “Whether or not that causes the Olympics to follow suit is yet to be seen, given that the Olympics are not until the summer of 2021 and by then the momentum that we see today may have long subsided.”

The COC AC's other recommendations are:

- Establish two separate rules - one regarding expressions through commercial matters such as emblems, advertising and commercial installations and the other regarding demonstrations, protests and propaganda - when expressing views.

- Clearly define and outline the consequences and the “degrees of violation” around demonstration, protest and propaganda.

- Explore other opportunities to meaningfully celebrate unity and inclusion by taking a stand against racism and discrimination.

This report from The Canadian Press was first published Sept. 21, 2020.