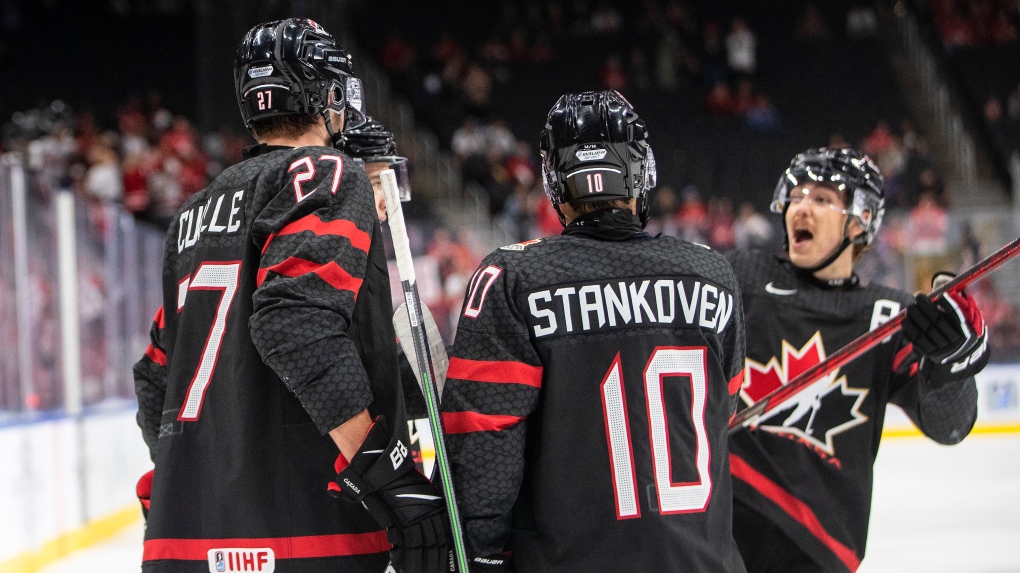 Canada's Logan Stankoven is used to putting pucks in the back of the net, but scoring hasn't come easily at the world junior hockey championship.

He buried a pair of chances on Wednesday, though, helping Canada to a 6-3 quarterfinals win over Switzerland.

"It's harder than I thought, for sure," said Stankoven, a Kamloops Blazers forward who was named the Canadian Hockey League's player of the year in June.

"The goals haven't come easy. I've had chances, but not as much as I'd like. Tonight I thought I was able to create a few more chances and the puck was going in the net. So it was a good feeling."

Stankoven also notched an assist, while Tyson Foerster scored and contributed two helpers. Jack Thompson, Nathan Gaucher and Will Cuylle all added goals for Canada (5-0-0) and Ronan Seeley chipped in with a pair of assists.

Attilio Biasca scored twice for Switzerland (1-4-0) and captain Simon Knak also found the back of the net.

After exploding for four goals in the first period, the Canadians struggled at times Wednesday, giving up prime scoring opportunities on sloppy play.

"We definitely didn't want to take these guys lightly but they played really strong and kind of caught us by surprise a little bit," said goalie Dylan Garand, who made 23 saves. "I think we did a good job of sticking with it and finding a way. It wasn't pretty but we're moving on."

The victory means Canada will face Czechia (2-2-1) -- the country commonly known as the Czech Republic -- in Friday's semifinals.

The Czechs gritted out a massive 4-2 upset over the U.S. (4-1-0) in the final quarterfinal game on Wednesday, leaping out to a 3-1 lead midway through the second period and held on for the win.

Jiri Kulich helped out with two assists before scoring into the empty net to dash the hopes of the reigning champion Americans with less than two minutes on the clock.

Jan Mysak, Petr Hauser and Matyas Sapovaliv also had goals for the Czechs, who have not won a medal at the world juniors in 15 years.

Logan Cooley opened the scoring for the U.S. and Carter Mazur briefly brought his team to within one 11:31 into the second.

Czech goalie Tomas Suchanek stopped 19-of-20 shots and Kaidan Mbereko made 15 saves for the Americans.

Switzerland made a late push Wednesday, pulling goalie Kevin Pasche with 3:15 to go in favour of an extra attacker but couldn't make up the two-goal deficit.

Instead, Stankoven scored into the empty net with 69 seconds left on the game clock.

"It's the dreaded quarterfinal game where you're playing a team that has absolutely nothing to lose," Canadian coach Dave Cameron said of the pressure. "And give them credit -- they came at us and they made it interesting. But we found a way."

Some sloppy play created trouble for Canada midway through the second period.

Trying to clear the puck from behind the net, Garand sent the puck to Donovan Sebrango along the boards and the defenceman sent the puck up ice.

Biasca picked off the pass and snapped a shot past the Canadian goalie to make it 5-3 at the 7:51 mark.

"Things didn't really go our way some of the game," Seeley said. "We battled back and found a way to win. And that's all that matters."

A pass from Olen Zellweger to Cuylle down low set up Canada's fifth goal. Cuylle sent a sharp-angle shot in off Pasche 4:30 into the second.

The Swiss cut their deficit to 4-2 with just 8.2 seconds left in the opening frame.

Joshua Fahrni sent Biasca the puck from below the goal line and the Halifax Mooseheads' forward blasted a shot in over Garand's shoulder.

Patenaude denied Canada's Elliot Desnoyers but the puck got caught under his pad and Gaucher poked it in for his first goal of the tournament 17:01 into the game. Pasche made 30 saves in relief.

Stankoven gave Canada a 3-1 cushion with a breakaway 14:32 into the first. The Dallas Stars' prospect picked off a pass at the Swiss bench and sprinted into the offensive zone alone. His initial shot ricocheted off the crossbar, so Stankoven collected the rebound and backhanded it into the open net for good measure.

Seeley's sneaky pass across the slot helped Canada re-take the lead 12:31 into the first. Thompson collected the puck and fired a quick shot pass Patenaude to make it 2-1.

Switzerland's first goal of the night came 2:21 into the game when Brian Zanetti uncorked a rocket from inside the blue line and Knak tipped it in for the equalizer.

Canada opened scoring just 74 seconds earlier when Stankoven sent a crisp pass to Foerster in the faceoff circle and he blasted it in for his third goal of the tournament.

Isak Rosen got Sweden on the board 16:44 into the first period and Gustavs Ozolins buried the equalizer for Latvia at the end of the second.

Latvia's Martins Lavins was tossed from the game 89 seconds into the third for a check to the head, but his teammates killed a five-minute major penalty to keep the score at 1-1.

Andrae broke the deadlock 9:49 into the third with a long shot through traffic. Jesper Wallstedt stopped 12 shots for Sweden (4-1-0) and Bruno Bruveris made 25 saves for Latvia (1-3-1).

Four points from Roby Jarventie led Finland to a 5-2 victory over Germany in another quarterfinal Wednesday.

Jarventie's first goal at 14:48 of the first period gave Finland a 3-1 lead and ended up as the game winner.

After Germany's Bennet Rossmy scored his second goal of the game in the second period to make it 3-2, Jarventie restored Finland's lead 6:22 into the third with Yannick Proske off for hooking.

Roni Hirvonen and Joel Maatta also scored power-play goals as Finland went 4-for-6 with the man advantage. Finland's power-play unit has been lethal throughout the tournament, firing at a 59 per cent clip (13-for-22).

Kasper Simontaival opened scoring for Finland with an even-strength goal 3:37 into the contest.

Canada took silver in the 2021 tournament, which was held at Edmonton's Rogers Place without fans due to COVID-19 restrictions.