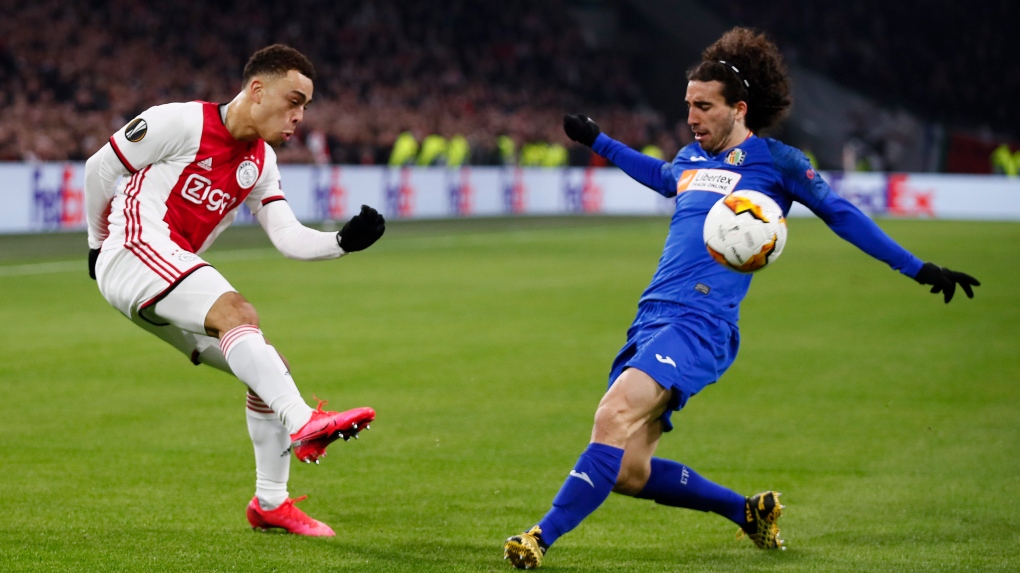 Ajax's Sergino Dest, left, and Getafe's Marc Cucurella vie for the ball during a round of 32, second leg, Europa League soccer match between Ajax and Getafe at the Johan Cruyff Arena in Amsterdam, Netherlands, Thursday, Feb. 27, 2020. (AP Photo/Peter Dejong)

BARCELONA, SPAIN -- Measures to stem the spread of the virus in Spain have some of the country's soccer fans complaining that they will not be able to attend their team's most high-profile match in more than a decade.

The Health Ministry said this week that major soccer and basketball games involving Italian teams will be played in empty stadiums because of the virus outbreak in northern Italy. Those soccer games include Valencia's Champions League game against Atalanta and Getafe's Europa League match against Inter Milan.

Some fans of both Spanish clubs, however, think the decision to play the games without a public is going too far.

Getafe's Federation of Fan Clubs said instead of closing the doors of the club's Alfonso Perez Coliseum for the match against Inter on March 19, Spanish authorities should prohibit flights from Italy.

"It has proven very difficult for us to reach a European competition and this is a match for Getafe CF's history books. We don't want it to be remembered as the game that was played behind closed doors," the group said in a statement.

In another statement published jointly by the fan club federations of Getafe and Valencia on Wednesday, they asked for authorities to allow only season-ticket holders attend the matches.

Spanish authorities have insisted that no fans will attend the games.

While Valencia is used to playing European matches, Getafe's fans are relishing their team's best run in recent memory after years of relegation battles.

Getafe only recently returned to the top division in Spain under current coach Jose Bordalas. It was the surprise team of the league last season when it finished in fifth place and earned its first Europa League berth in nine years.

Getafe has continued to impress this season. It is in fourth place in the Spanish league and achieved its greatest feat in years when it eliminated Ajax from the last 21 of the Europa League last week.

"We will do what the authorities, both the UEFA and the ministry, say, just like the everyone else," Torres said Wednesday. "Fan health comes first. Is seeing a game more important than taking care for our supporters?"

Italy, which has the largest outbreak of the virus in Europe, has closed all schools and universities and forbade fans from attending sporting events.

Valencia hosts Atalanta on March 10 after losing the first leg 4-1. A Spanish journalist who regularly covers Valencia was believed to have been infected with the virus during the trip to Italy for the first leg.

Getafe plays Celta Vigo in the Spanish league on Saturday, then visits Inter in the first leg on March 12.

Getafe's supporters have to go back to 2008 for a similarly important game when the modest team from southern Madrid almost toppled Bayern Munich in the UEFA Cup, now called the Europa League. Bayern had to fight back for a 4-4 aggregate draw that put the German club through to the semifinals on away goals.

Getafe's only other Europa League appearance was in 2010-11, when it didn't advance from the group phase.