Spanish clubs now allowed to train with groups of 14 players 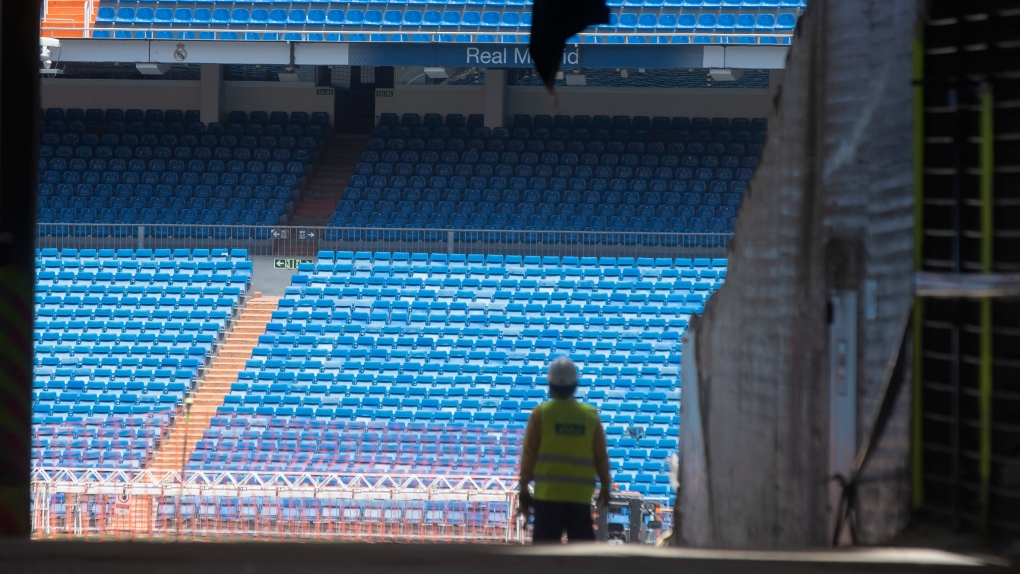 Workers walk into Real Madrid's Santiago Bernabeu stadium in Madrid, Spain, Monday, May 25, 2020. Spanish league clubs are now allowed to train with groups of up to 14 players as the league stays on track to restart in less than three weeks. (AP Photo/Paul White)

MADRID -- Spanish league clubs are allowed to train with groups of up to 14 players as the league stays on track to restart in less than three weeks.

Only 10 players were allowed in group training last week because of confinement restrictions that are gradually being lifted across the hard-hit nation where nearly 27,000 known people have died with COVID-19.

Group training sessions are part of the penultimate phase before teams can be considered ready to return to competition. Full squad sessions are expected to begin next week, depending on how the coronavirus pandemic progresses.

"We've gone through some very difficult and complicated moments during this pandemic and we don't want to jump the gun," Spanish league president Javier Tebas said late Sunday in his weekly interview with league broadcaster Movistar.

Players were allowed to practice only individually during the first stage of training.

Tebas said the competition is expected to resume without fans on June 11 -- a Thursday -- with the Seville derby. He said the popular first-division match between rivals Sevilla and Real Betis would be a good way to mark the return to competition and "honour those who have lost their lives" during the pandemic in Spain.

Tebas said it remains impossible to guarantee the June 11 start date because the decision ultimately depends on how the pandemic and the training phases progress. That would be nearly three months after soccer came to a halt in Spain and most of Europe.

"We need to align the phases, meet with the Spanish soccer federation and the Spanish sports council to finalize everything," he said.

Tebas said the schedule for the first four rounds after the league resumes is expected to be announced in early June, with all matches expected to take place in empty stadiums. Spanish authorities don't expect fans to be allowed in sports events at least until after the summer.

The league president said kickoff times will take high temperatures into account during the Spanish summer. The Sevilla-Betis game is expected to start at 10 p.m. local time (2000 GMT).

The league was suspended in mid-March with 11 rounds remaining. Defending champion Barcelona has a two-point lead over Real Madrid.