Some teams and players may benefit from coronavirus outbreak 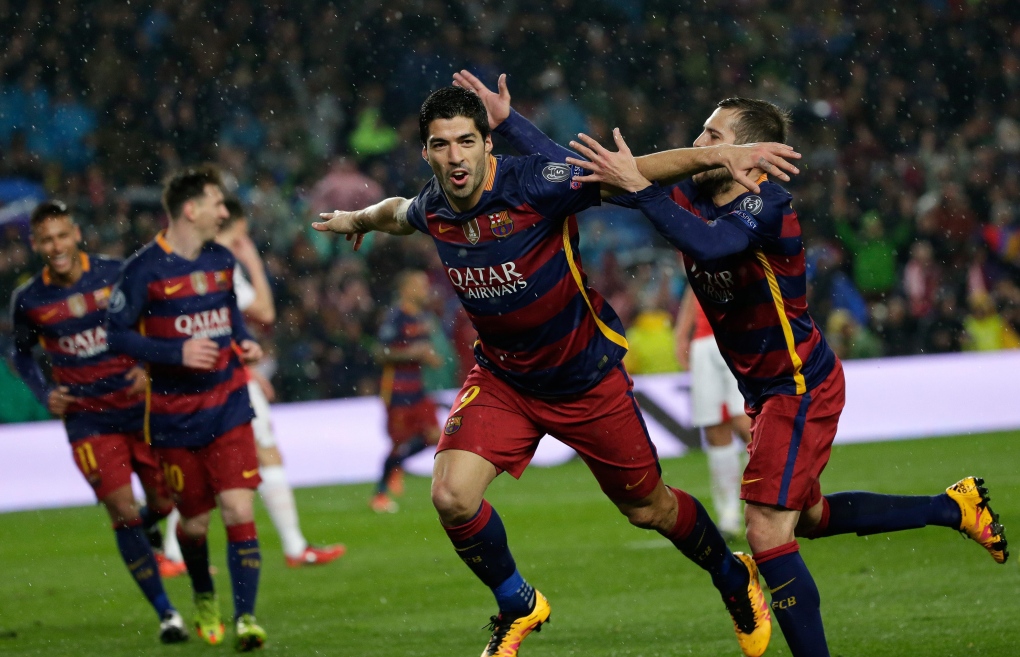 Barcelona's Luis Suarez celebrates after scoring his side’s second goal during the Champions League round of 16 second leg soccer match between FC Barcelona and Arsenal FC at the Camp Nou stadium in Barcelona, Spain, on Wednesday, March 16, 2016. (AP Photo/Emilio Morenatti)

MADRID -- It wasn't long ago that Jose Mourinho was lamenting Tottenham's struggles that he blamed on injuries, adding he couldn't put a team together anymore.

In Spain, Barcelona coach Quique Setien had accepted he was playing most of the rest of the season without Luis Suarez after the striker underwent knee surgery.

Belgium and France were also not really counting on having injured players Eden Hazard and Ousmane Dembele for the European Championship.

But with the suspension and postponement of competitions because of the coronavirus pandemic, things have changed.

Some clubs and nations are catching a break as players who were sidelined and expected to be out for the season now have a chance of recovering for when games resume -- whenever that is.

UEFA postponed the 2020 European Championship for a year on Tuesday, while the Champions League, the Europa League and the domestic leagues and cups remained on hold. The club tournaments were set to finish by the end of May, but now could go on well into the summer.

Suarez underwent right knee surgery in January and was expected to be out for about four months, missing most of the Spanish league and the Champions League. With both competitions temporarily halted, the number of games he is expected to miss is significant smaller.

And because his recovery is going faster than expected, it's even possible he could become available for the second leg against Napoli in the round of 16 of the Champions League if the competition resumes sometime next month.

Dembele was ruled out for the season after a hamstring surgery that was expected to keep him sidelined for six months, ending his chances of playing for Barcelona and also for France at Euro 2020.

The same is true for Hazard, who in the beginning of the month underwent surgery on his lower leg and was expected to be done with Real Madrid for the season and out of Belgium's Euro 2020 squad.

England was another team that may have benefited with the postponement of Euro 2020, considering Manchester United forward Marcus Rashford was nursing a back injury that could have affected his participation in the tournament.

Tottenham was one of the teams struggling the most with injuries when competitions started being halted because of the rapidly spreading virus that has infected more than 185,000 people and caused more than 7,300 deaths worldwide.

After the club's elimination against Leipzig in the Champions League, Mourinho said "we are not even a team, we are a group of players that are available to play."

Among his players sidelined were Harry Kane and Son Heung-min, Tottenham's two leading scorers, and another attacker, Steven Bergwijn.

Mourinho said he expected to count on Son only for "some matches" this season after the player underwent surgery on a broken arm in February. He had to enter quarantine as a precaution because of the coronavirus after returning to England from South Korea, where he had the surgery.

For most people, the virus causes only mild or moderate symptoms, such as fever and cough.

Kane has a hamstring injury and was initially expected to be back in action in April at the earliest.

Bergwijn was likely to be out until mid-May because of an ankle injury.

Other English clubs that may benefit from the break include Man United, which may see Paul Pogba fully recover from a right ankle injury, and Liverpool, which has been without goalkeeper Alisson Becker for the last three games because of a calf injury.

Manchester City defender Aymeric Laporte had also missed the last three games because of a suspected hamstring injury, having been sidelined for much of the season with knee ligament damage, and could have missed the Champions League quarterfinals had the team advanced.