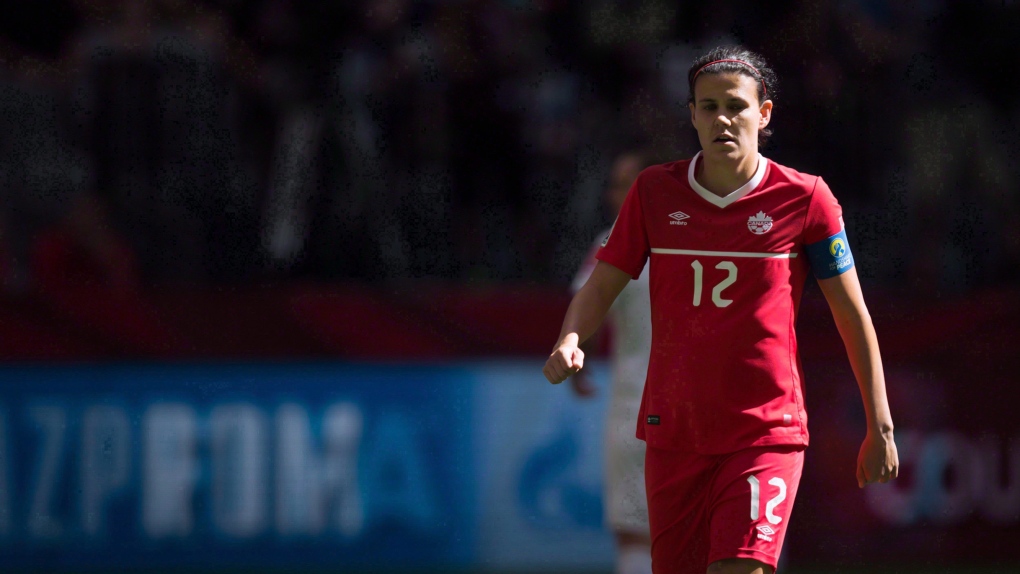 Canada's Christine Sinclair looks on during first half of the FIFA Women's World Cup round of 16 soccer action in Vancouver in a June 21, 2015, file photo. (File/ The Canadian Press)

EDINBURG, Texas -- Christine Sinclair scored her 175th international goal and Canada beat Costa Rica 3-1 on Thursday to finish the group stage undefeated and advance to the semifinal at the CONCACAF Women's Championship.

Sinclair, who can overtake American Abby Wambach for the most international goals with another 10, put Canada ahead 3-0 in the 57th minute after first-half markers from Janine Beckie and Nichelle Prince.

Gloriana Villalobos put Costa Rica on the board in the 73rd minute.

Beckie opened the scoring in the 26th minute as Jessie Fleming feinted and flicked the ball in the air to the 24-year-old striker, who put it past Costa Rican goalkeeper Daniela Solera.

Canada stretched the lead 15 minutes later, when Beckie's corner bounced off a defender back to her and she sent a cross to the far post where Prince buried it off a defender.

In the second half, Allysha Chapman found Sinclair who fired a shot wide and out of the reach of Solera.

Canadian coach Kenneth Heiner-Moller said the team looked focused during the match and has ramped up its performance throughout the tournament.

"It's a tough match to play because you know Costa Rica's got nothing to lose and they came flying out as expected, but they do have these very good players and I think we were good at nullifying them until we let them in with some of our passing that was a little sloppy," he said.

"But I'm very satisfied with the amount of chances we created on the ball."

Canada opened the tournament -- which serves as a World Cup qualifier for North and Central America and the Caribbean -- with a 2-0 win over No. 64 Jamaica on Friday. The No. 5 Canadians downed No. 88 Cuba 12-0 on Monday in their second group match.

Canada finished atop Group B and is slated to face Panama on Sunday. Jamaica will take on the top-ranked and Group A winning U.S. in the other semifinal.

The knockout stage, which wraps up Oct. 17, will take place in Frisco, Texas.

Prince said the team is upbeat heading into the next round.

"I think we did great throughout the group stage and I think we're feeling confident," she said. "I feel really good about the team performance right now."

The top three finishers qualify automatically for the 2019 Women's World Cup in France while the fourth-place team will meet Argentina in a playoff to see who joins them.

The U.S. has won the regional championship seven times while Canada won twice (1998 and 2010).

Canada outscored its opposition 24-3 in finishing runner-up to the U.S. at the most recent CONCACAF women's tournament in 2016, which served as an Olympic qualifier.

Canada has won all 13 of its meetings against Costa Rica, including a 6-0 victory over the Central Americans in Toronto in June 2017.