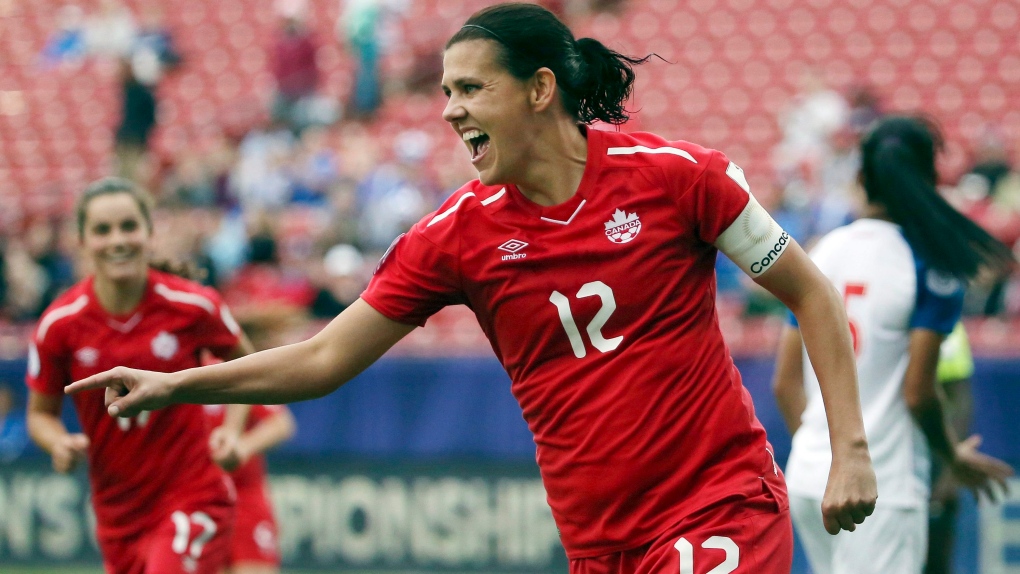 Canada forward Christine Sinclair celebrates after scoring a goal in the second half of a soccer match at the CONCACAF women's World Cup qualifying tournament against Panama in Frisco, Texas on Oct. 14, 2018. (THE CANADIAN PRESS/AP, Andy Jacobsohn)

Christine Sinclair's goals have literally spanned the globe, with her hit list ranging from Argentina to Zimbabwe.

Next week, the 36-year-old from Burnaby, B.C., will look to add St. Kitts and Nevis to her 40-country goal-scoring resume when Canada opens play at the CONCACAF Women's Olympic Qualifying Championship in south Texas.

Sinclair's next goal will be her 184th, tying the world scoring record currently held by retired American striker Abby Wambach. While Canada's goal is to secure one of the two Olympic berths available to CONCACAF for the Tokyo Games, all eyes will be on Sinclair as eighth-ranked Canada takes on No. 127 St. Kitts, No. 51 Jamaica and No. 26 Mexico in group play.

While the Canadian women have never faced St. Kitts, their captain has already scored 11 times against Jamaica and 16 against Mexico.

The record sits in the Canadian team background, at least when the captain is around.

"It might get spoken about behind her back," veteran midfielder Sophie Schmidt said with a giggle.

"It's going to happen this tournament," she added. "I know she doesn't like talking about it but as a team we're very excited for her to reach that milestone and if we can, we're just going to give Sincy as many opportunities as possible and she'll be clinical as per usual."

The goal -- and the record-breaker that will undoubtedly follow -- will be celebrated by many.

"I will secretly cry in the corner," said former Canadian international goalkeeper Karina LeBlanc, now head of CONCACAF women's football. "Because this woman deserves every single ounce of this, because you know her to be the most humble woman in the world -- and she'll try probably not to talk about it."

Sinclair routinely shies away from the spotlight. The pride she feels in chasing the record is mostly about the Maple Leaf she wears on her chest.

"It would be pretty cool to see a Canadian on the top of that (list)," she said.

Pressed on the issue, Sinclair acknowledges she is "just proud to be in this position, proud of the body of work I've had in terms of a career. It's pretty special."

But Sinclair takes a Zen-like approach to her game.

"If I score, I score. If I don't, it means someone else is which makes me happy too."

It's almost 20 years since Sinclair debuted for Canada under coach Even Pellerud in a 4-0 loss to China at the Algarve Cup on March 12, 2000. Two days later she opened her goals account eight minutes into a 2-1 loss to Norway at the same tournament.

Sinclair remembers it well. Pellerud was a former Norway coach. And she beat Bente Nordby, one of the best goalkeepers in the world at the time.

"I intercepted a pass and it was a breakaway and then put it far post," Sinclair recalled. "You never forget your first one, right?"

More followed. Many of the memorable variety. LeBlanc saw Sinclair's star quality from the get-go.

"She'd first come into camp and we were doing a scrimmage and she'd take a touch, the ball was inside of the six (yard box), took a touch and placed it. And I was like 'Who is this kid?' Because as a goalkeeper, usually people try to just hit it as hard as they can because they're so close and she placed the ball where I was not.

"It sounds so small and simple but that that's why she became and arguably will be the best goal-scorer in football. Because her poise in front of the net and her ability to put the ball where the goalkeeper is not is why she is who she is. Because she's at home in front (of goal)."

One of Sinclair's most celebrated strikes came Dec. 19, 2010, against host Brazil in the final of an international tournament.

After a Canadian takeaway, the ball came forward to Melissa Tancredi who beat a Brazilian and found Sinclair plowing a lone furrow up front. Pulling the defence apart, the two exchanged passes again before Tancredi found Sinclair, positioned a yard or so off the corner of the penalty box.

Loading up her weaker left foot, Sinclair bent the ball high from distance off the far goalpost into the net past a diving goalkeeper while five Brazilian defenders watched Sinclair's brilliance from inside the box.

"I think what makes a goal-scorer is the variety of finishes, the variety of tools and expertise and finishing or power ... the subtleties and nuances," said former Canadian international Carmelina Moscato. "And that was something I had never seen from her before. It just made me feel like she was limitless."'

Sinclair has made a career of rising to the occasion, scoring on big stages.

On opening day of the 2011 World Cup, she stunned a crowd of 73,680 when she bent a free kick over a wall and past the goalkeeper in a 2-1 loss to host Germany.

"For a moment we were able to silence the Berlin Stadium," Sinclair recalled. "It's just a moment I'll never forget."

Four years later, Sinclair rescued Canada on home soil on Day 1 of the 2015 World Cup. With the pressure of an entire country on her shoulders, she stepped up to the penalty spot in the 92nd minute against China and hammered a penalty in off the goalpost for a 1-0 win in Edmonton.

Perhaps Sinclair's most famous performance was a never-say-die hat trick against the U.S. in the 2012 Olympic semifinal, which ended in a controversial 4-3 American win after extra time.

"I felt so blessed to be on her team and to watch just extraordinary happen in one of the greatest stadiums of all time, in the stadium where every single girl who played in that game grew up watching on TV hoping to one day probably go and watch a game in the stands," said LeBlanc.

"But we were able to be part of arguably one of the best games in women's football history. And watch a woman just soar. That's the game for me I will never ever forget."

The first goal was classic Sinclair with assists from Marie-Eve Nault and Tancredi. After taking a flick from Tancredi, Sinclair raced towards goal. She controlled the ball with her left foot, took an extra touch to get round a defender and coolly slotted the ball home with her right foot.

The second goal came from a fine cross from Tancredi. Sinclair got separation from her marker and headed the ball into the corner past American 'keeper Hope Solo.

The third came off a Schmidt corner, with Sinclair rising high to beat her marker again before heading the ball high into the corner over a defender positioned at the post.

Sinclair would enjoy the fact that all the goals were the result of fine work from teammates. They, meanwhile, point at Sinclair's composure on the goal.

"It's always her. It's always her that gets the goal that we need to win the cup or win the game," said former Canadian international and current youth coach Rhian Wikinson.

Sinclair did just that with the decisive goal in Canada's 2-1 win over host Brazil in the bronze-medal game at the 2016 Olympics at Sao Paulo.

Jessie Fleming and Deanne Rose helped lay the groundwork, with Fleming stealing the ball from a Brazilian and showing some on-the-ball trickery before sending it to Rose, who squared the ball to an onrushing Sinclair in the penalty box.

The ball actually bounced high off Sinclair's left foot and hit her torso before. As it came down, she lashed out her right foot for the goal.

While Sinclair is a scoring machine, Canada coach Kenneth Heiner-Moller sees so much more.

"Every time I get a question about Christine, it's about her goals but she's so much more than that," he said before the decisive round-of-16 match against Sweden that proved to be Canada's last at the World Cup last summer in France.

"The goals are an important thing in this game, an important thing for us and every time she scores, it's pretty crucial. But as a captain, a leader of this team, the way she just carries herself is leadership in itself ... She is a very very great ambassador of Canada on the pitch and of the pitch."

Sinclair scored goal No. 182 in a 2-1 loss to the Netherlands in the final group game at the World Cup. No 183 came in Canada's last outing, a 3-0 win over New Zealand at a tournament in China in November. It was Sinclair's record 289th appearance for Canada.

Coincidentally Sinclair and Wambach were both on goal No. 99 when their teams faced off in a friendly in July 2009.

Wambach said Sinclair will be a legend before her career is over.

Wambach, whose career had been interrupted by a broken leg, reached her milestone in a 1-0 American win over Canada. Sinclair notched her 100th seven months later in a 3-0 win over Poland at the Cyprus Cup.