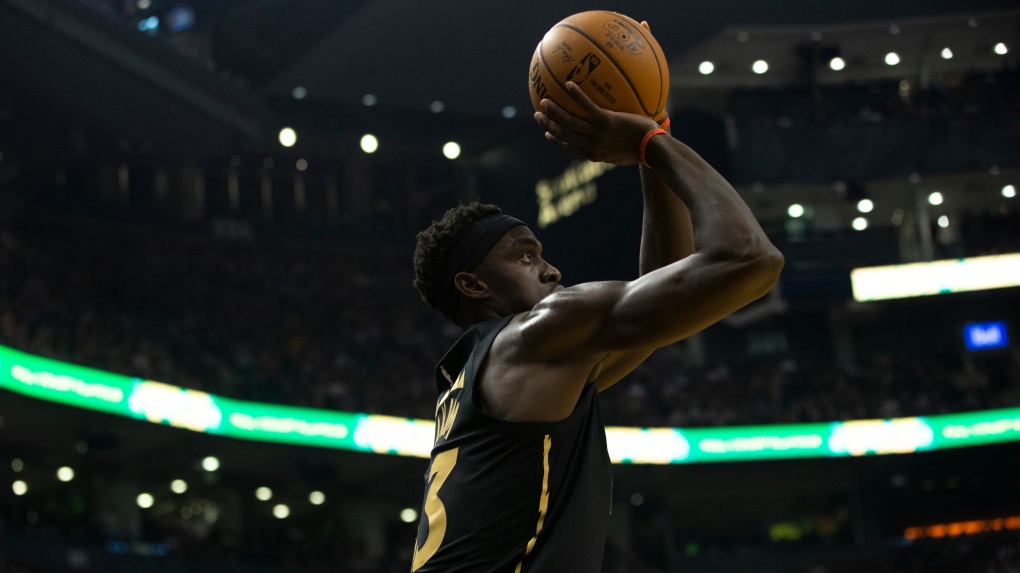 TORONTO -- Don't tell Pascal Siakam when he has a good game. He doesn't want to hear it.

Siakam tied a career high with five three-pointers and had 31 points in just three quarters of work as the Toronto Raptors cruised past the New York Knicks 126-98 on Wednesday.

"I feel like every time you guys tell me I did something well, the next game I go like 0 for 8 or something like that. So, thank you for that," joked Siakam. "I'm just continuing to work hard. Shooting's a part of my game that I continue to work on."

Toronto head coach Nick Nurse believes that the 25-year-old Siakam will reach his true potential as an NBA player in the next 18 months.

Nurse explained how early in Siakam's career the Raptors had him work on his shooting for at least an hour every day, taking 450 shots in solo sessions. After a few days of these specialized drills Siakam decided to double the volume of shots.

"It's always something I've been able to do to make sure I work on my craft every single day, understanding I'm always late," said Siakam, who began playing basketball when he was 17. "That's my mindset -- I have to find a way to catch up to all the people that started playing when they were like five years old."

Fred VanVleet added 15 points with four assists and three rebounds as the Raptors (13-4) improved to 8-0 at home on the season, a franchise record.

OG Anunoby had his first career double-double, scoring 13 and pulling down 12 rebounds for Toronto, which sat its starters for the fourth quarter.

Julius Randle led the Knicks (4-14) with 19 points, most of which came in the first quarter. New York has lost 15 of its past 16 games against Toronto, including their last seven meetings.

Knicks rookie RJ Barrett, from Mississauga, Ont., announced earlier Wednesday that he would play for Canada at the Olympic qualifying tournament this summer in Victoria. He wore customized red sneakers that read "Made in Canada" on the sides for the game against the Raptors.

"I'm playing basketball," said Barrett, who leads the Knicks in minutes played this season. "That's the light that I see. I get to play basketball every day."

He and fellow Canadian Ignas Brazdeikis were honoured with a brief video package in the first quarter. Brazdeikis finished with two points in 10 minutes of play.

Randle had 11 points as New York led by as many as 10 points in the first, but Terence Davis's layup cut that to 29-21 by the end of the quarter.

An 11-3 Raptors run to start the second quarter was capped by Rondae Hollis-Jefferson's putback of a rebound. He made a free throw to tie the game.

Siakam's driving layup on Toronto's next possession made it 34-32 with 8:18 left to play in the second. Toronto continued to dominate play in the quarter, taking a 58-46 lead into halftime.

"We started lackadaisical a bit and then figured it out end of the first, start of the second and that's all you look for," said VanVleet. "Just try to keep getting better and take each win where you can get it."

Siakam tied his career-high for three-pointers with a jumpshot to make it 81-57 with 4:40 remaining in the third. He matched his three-point performance from a 122-104 rout in New Orleans on Nov. 8 when he also had a career-best 44 points.

Nurse turned to his bench in the fourth quarter, and the Raptors extended their lead by as many as 34 points.

Toronto made 51.2 per cent of its three-point attempts, with the Raptors' 21 threes tying the franchise's single-game record.

Notes: Barrett had 300 friends and family among the sell-out crowd of 19,800 at Scotiabank Arena.

This report by The Canadian Press was first published Nov. 27, 2019.