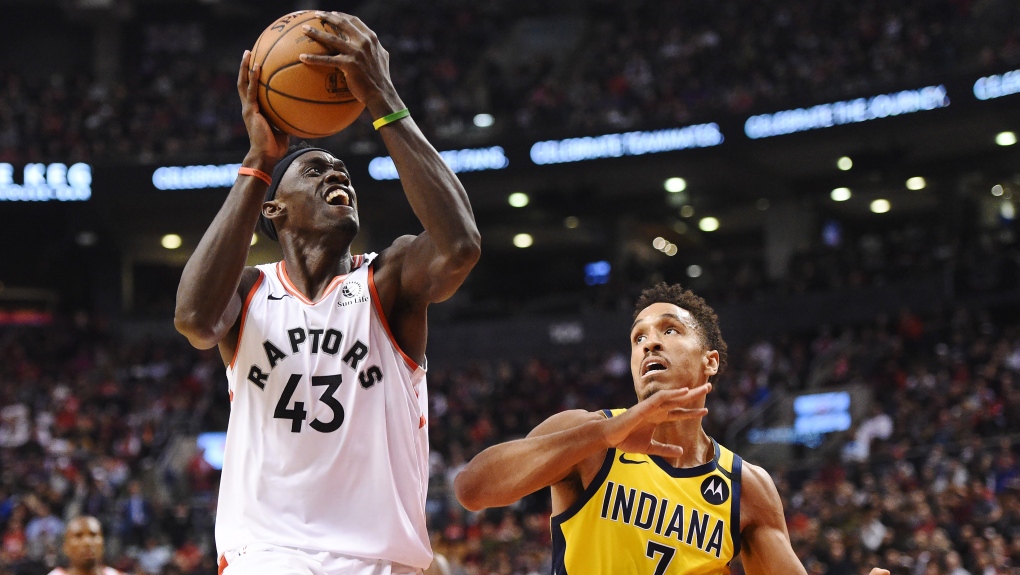 TORONTO -- Kyle Lowry had been keen to come out of the NBA all-star break at top speed.

On Sunday, Lowry set a breakneck pace in the Toronto Raptors' most lopsided victory in franchise history.

Lowry, who'd made his sixth appearance at the all-star game last week in Chicago, had 16 points and 11 assists Sunday, and the Raptors throttled the Indiana Pacers 127-81.

"I've never coached or seen anybody play as hard as this guy does in basketball," Raptors coach Nick Nurse said afterward. "It's the ultimate compliment and it rubs off on the other guys, and not only does he do it that way, he plays smart, he knows the coverages, he knows the opponents, he studies film, he gives his body up, right?

"All those things kind of transfer to the other guys . . . leadership, right?"

Domantas Sabonis and Aaron Holiday had 14 points apiece to top the lacklustre Pacers (33-24), who were missing all-star guard Victor Oladipo (sore lower back).

In a game Nurse called the best start-to-finish performance in recent memory, the Raptors ran roughshod over the Pacers from the opening tipoff, holding the Pacers to just four baskets on a woeful 17.4 per cent shooting in the first quarter. By the time Fred VanVleet launched a running three-pointer with four seconds left in the first half, the Raptors were up by 31 points.

"Flying and executing the coverages, ball was poppin', and every single guy that went in there was on, ready to go," Nurse said.

The Pacers' 32 points at halftime were a season-low for a half by an opponent.

Toronto took an 85-55 lead into the fourth, and kept their foot on the Pacers' figurative throat, and when Hollis-Jefferson connected on a bucket with 8:19 to play, the Raptors were up by 40.

"We set a tone earlier," Ibaka said. "Normally when we start good like this we kind of relax, but tonight as a team we did a great job staying focused on us and kept working together."

Nurse emptied his bench for the final five minutes and the game well in hand. Back-to-back three-pointers by seldom-used sharpshooter Thomas put the Raptors up by 46 points with 2:17 to play, and had the Raptors players on the bench up and dancing in celebration.

Thomas shot 5-for-7 from long distance in just 15 minutes of action.

"That team is playing for something big and they showed us what February, March, April, if you can get into May and June, what it's going to look like, and what you've got to play against," he said. "They jumped on us, they came with the intensity, they play with a sense of urgency, that team is connected out there."

The Raptors shot 51.1 per cent on the night, while holding Indiana to 32.6 per cent and 24.2 per cent from three-point range. Toronto outrebounded Indiana 57-39.

The win was Toronto's 13th in a row at home versus Indiana.

"Feels good man, to be playing like that and just having fun," Hollis-Jefferson said. "That's what it's about at the end of the day, competing and having fun."

The Raptors raced out to a 12-point lead before Sunday's game was barely two minutes old, and held Indiana without a field goal until Malcolm Brogdon's layup five minutes into the game. Siakam's three-pointer had Toronto up by 26 points with 1:15 left in the first, and Toronto took a 34-12 lead into the second quarter.

Indiana fared slightly better in the second, pulling to within 17 points a couple of times, but VanVleet's running three with four seconds left in the half send the Raptors into the break with a 63-32 advantage.

The Raptors host the conference-leading Milwaukee Bucks on Tuesday.