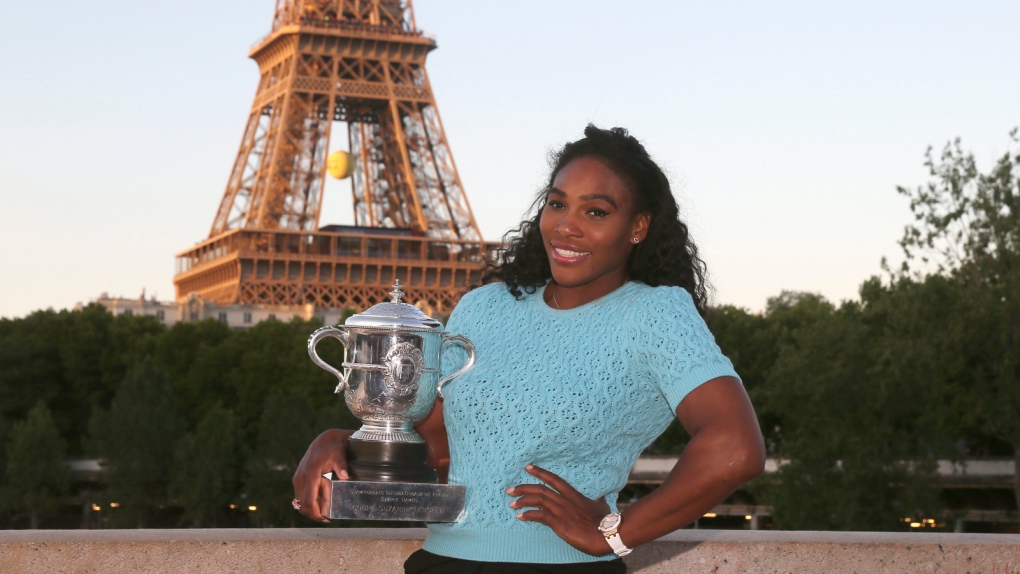 Serena Williams of the U.S. poses with her trophy after defeating Lucie Safarova of the Czech Republic in three sets, 6-3, 6-7, 6-2, in the women's final of the French Open tennis tournament, at Roland Garros stadium in Paris, France, Saturday, June 6, 2015. (AP / David Vincent)

PARIS -- When someone has won as many significant matches and titles as Serena Williams -- her Grand Slam trophy count now stands at 20 -- it can be hard to decide how to sort them by degree of difficulty or order of importance.

She puts her 2015 French Open championship high on the list.

"It's hard. I need to sit down and, like, rank them," Williams told a small group of reporters Saturday evening after becoming the third player in tennis history to get No. 20. "This is up there, because I was not at my best."

Hours earlier, she had beaten Lucie Safarova 6-3, 6-7 (2), 6-2 in a seesaw final for her third title at Roland Garros, despite dealing with an illness that Williams said made her consider pulling out of the tournament.

She fell behind 2-0 in the third set against the 13th-seeded Safarova before taking the last six games. In four other matches at Roland Garros this year, Williams lost the opening set.

Williams coughed and sniffled and blew her nose into a tissue during the brief question-and-answer session.

She spent most of Friday in bed, skipping a practice session, and, in her words, came "pretty close" to withdrawing.

Her coach, Patrick Mouratoglou, said Williams "could barely walk" on Friday and pondered not playing in the title match, "but between thinking about it and actually doing it, there is a step that she was far from taking."

Hard to imagine Williams not giving it a go.

The 33-year-old American is the second-oldest woman to win the clay-court tournament in Paris, 25 days younger than Hungary's Zsuzsi Kormoczy was in 1958. Williams is, after all, nothing if not a fighter on court, seemingly able to will herself to victory -- even when not at the height of her considerable powers.

As Mouratoglou put it: "She refuses to accept defeat."

Against Safarova, a left-hander who at 28 was appearing in her first Grand Slam final, Williams "did not play her best tennis," Mouratoglou said.

"Every Grand Slam win is exceptional. It's like climbing Everest," he said. "But especially this one, because she struggled."

Down the stretch Saturday, Williams was yelling repeatedly after points, cursing so loudly she drew a warning from the chair umpire.

"Believe it or not, I either get angry or I get calm. I always say, if I'm losing, I'm going out swinging. I think I play my best tennis when I am swinging. So it helps me. I play more aggressive," Williams said. "I just think that once I decide that, I start playing my game, and when I'm playing my game, it's difficult for me to lose."

The No. 1-ranked Williams is 32-1 this season, 12-0 in three-setters. She has won the past three major titles and trails only Margaret Smith Court (24) and Steffi Graf (22) for the most all-time. She heads to Wimbledon later this month halfway to a calendar-year Grand Slam, something accomplished by only three women, most recently by Graf in 1988.

"I think she can do it," Safarova said.

After all the deficits Williams set aside over the past two weeks, and the way it appeared she was able to turn matches around simply because she wanted to, who would doubt her?

"Out of nowhere, you'll see Serena give a fist pump, and all of a sudden she means business," said Rob Steckley, Safarova's coach. "That is what champions do. And she's got 20 of those big ones."