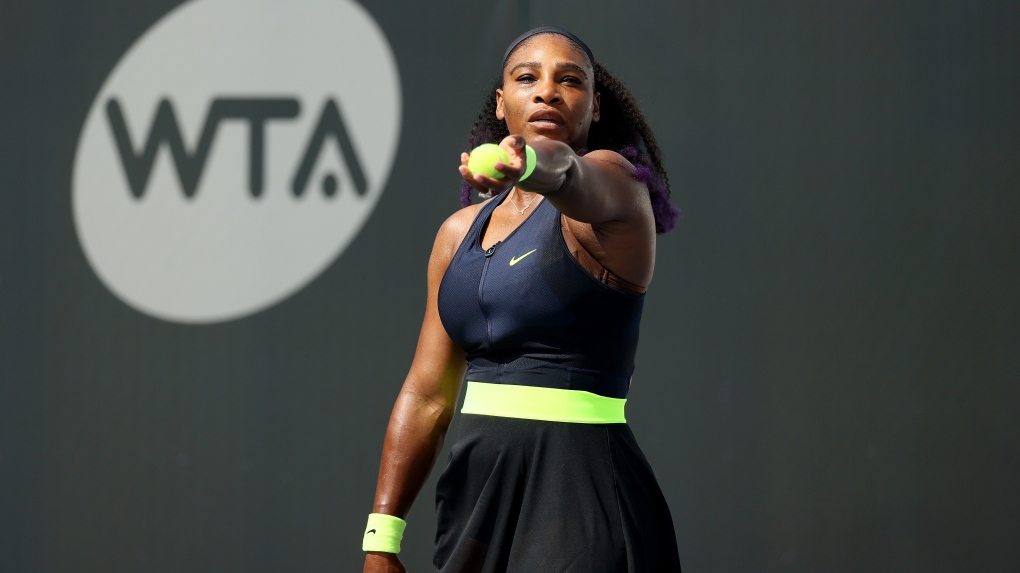 Serena Williams came back from the brink to start her first tournament in six months with a win. (Dylan Buell/Getty Images)

Serena Williams came back from the brink to start her first tournament in six months with a win.

A rusty Williams overcame fellow American Bernarda Pera 4-6 6-4 6-1 in the opening round of the inaugural Top Seed Open in Lexington, Kentucky.

Williams, the Open era Grand Slam record-holder, was in trouble at 4-4 in the second set and 0-40 on her own serve but dug herself out a hole and eased through the decider.

"Honestly, I knew I've been practicing really well and I wasn't getting a good rhythm out here, and I just kept thinking: 'Serena, play like you've been practicing,'" Williams said in a post-match interview. "So I knew that I could play a little bit better if I just hung in there."

Williams' last match had been in early February, when Anastasija Sevastova of Latvia handed the former top-ranked American her first loss in Fed Cup team competition on home soil. A month later, the coronavirus pandemic shut down all competitive tennis, including Wimbledon, which was canceled for the first time since the Second World War.

In contrast to her last match before the pandemic, which took place in a raucous atmosphere at a packed Angel of the Winds Arena in Everett, Washington, her match against Pera in Lexington was played behind closed doors, with players touching rackets instead of shaking hands at the end of the match and strict biosecurity measures in place to prevent the spread of the coronavirus.

"Right now I think sport has been one of the few things that can actually provide a breath of fresh air or a sigh of relief for people that are still stuck in their homes."

Although Williams had enjoyed "every part of the lengthy break," she said she also became "super, super careful" during the pandemic and "a bit of a recluse."

The American, who has a history of blood clots and pulmonary embolism, said she now travels with "like 50 face masks."

On the court, it also wasn't immediately business as usual for the 38-year-old.

Watched from the stands by her long-time coach, Patrick Mouratoglou, her husband, Alexis Ohanian, and her young daughter, Williams played a sloppy game at 2-2, dropping serve to love as the left-handed 60th-ranked Pera attacked her wavering forehand.

Serving for the first set at 5-4, Pera set up her first set point with a forehand and took the set as she ripped another forehand winner off a soft return.

In the second set, a fired-up Williams shouted her customary "Come on!" when she clinched a break to lead 3-1. But once again, Pera kept a cool head, breaking back straight away.

Down 0-40 on her serve at 4-4, Williams was in real danger of going out, but fended off four break points with some huge serving and blistering groundstrokes, and then evened the match as she took the second set 6-4.

The momentum now firmly on her side, Williams quickly raced to a 5-1 lead in the deciding set against Pera, who was the first left-handed player she has faced in two years. Serving for victory, Williams won the final game to love with a big forehand.

"I haven't played for so long, even matches and practice matches I haven't played, I've just been training," Williams said. "It was really good for me ... to win a match that was three sets."

Although exhibition events have been held in the U.S. and Europe from June, the WTA Tour officially resumed earlier this month. The men's ATP Tour will restart with the Western & Southern Open in New York on August 20.

The women's event in Lexington, the first in the U.S. since the pandemic struck, had been added recently as a warmup tournament for the US Open, which is scheduled to start August 31 in New York. The year's second major will also be played without fans because of concerns over Covid-19, the disease caused by the coronavirus.

The ninth-ranked Williams is likely to face an even bigger challenge in her next round, where she will play her sister Venus Williams.

After Lexington, Williams will play the Western & Southern Open in New York before attempting to tie the all-time Grand Slam singles record of 24, held by Australia's Margaret Court, by winning the U.S. Open.

Williams last won a major at the 2017 Australian Open, while pregnant with her daughter, Olympia. Since coming back from maternity leave, the American has lost four major singles finals, including last year's Wimbledon and U.S. Open. She was knocked out in the third round of the Australian Open in January, the sport's only major played so far this year.