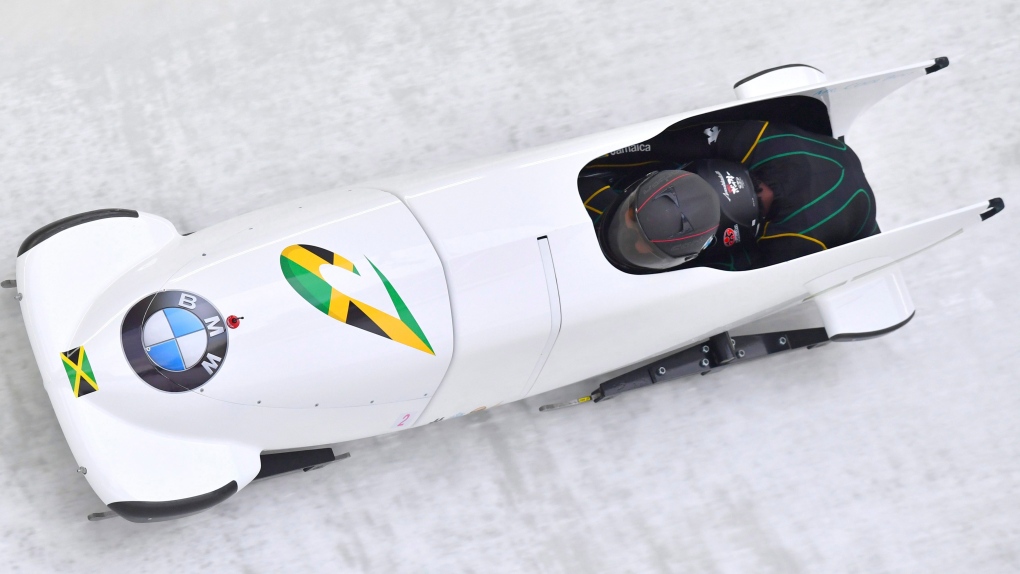 Jazmine Fenlator-Victorian and Carrie Russell of Jamaica speed down the track during their first run of the women's bobsled World Cup race in Innsbruck, Saturday, Dec. 16, 2017. (AP Photo/Kerstin Joensson)

TORONTO -- Every time the Winter Olympics roll around, actor Leon Robinson sees a renewed interest an old project of his: "Cool Runnings."

The Disney comedy, loosely based on the true story of a Jamaican bobsled team that defied the odds to make it to the 1988 Winter Olympics in Calgary, always makes headlines around the Games.

But this year has an added level of resonance, with the film celebrating its 25th anniversary and Jamaica competing with its first-ever qualifying female bobsled team.

"This year they're going to make history again," says Robinson, who goes by just Leon professionally.

"Especially now in the year of the women -- the timing could not be more perfect."

Robinson starred as Jamaican sprinter Derice Bannock, whose longing to compete in the Olympics prompts him to form a bobsled team with a dishonoured coach, played by the late John Candy.

Doug E. Doug, Rawle D. Lewis and Malik Yoba play the other members of the team, who have to train in the hot weather of Jamaica with rickety equipment.

"The message in the movie is about inspiration, about not being afraid of who you are," says Robinson, who lives in New York.

"Everyone can identify with the movie, because everyone can relate to being a fish out of water, being the only one of your particular type at an event."

The cast members had to affect Jamaican accents but only mild ones, as Disney was worried audiences wouldn't be able to understand them, the actors say.

For Lewis, the role of wealthy and straight-laced Junior Bevil was a departure from the usual parts he'd auditioned for.

"When I was getting in the business, there was a lot of shoot-em-up, bang bang, 'Boyz in the Hood' gangster kind of black roles out there, and I remember saying, 'I wish I could be part of something positive,' and I got my wish," he says.

Like the characters, the cast experienced climate shock upon arrival in Calgary.

"I remember walking down the streets and the streets were, like, whistling," says Doug, who plays Sanka Coffie, the team joker.

"They put us in these skin-tight bobsledding suits and said, 'They're made to withstand the cold' and it was like, 'Not this much cold,"' adds Lewis, who lives in Los Angeles.

Candy was generous and down-to-earth, bringing the relative newcomers to a hockey game and hanging out with them around Calgary.

"He really impressed me as far as how kind and altruistic he was," Lewis says.

"He was extremely famous. We'd walk through the streets and everybody would come up to him and he was just so matter-of-fact about it, putting people in headlocks, grown men. He just had so much fun with being him.

"He changed my life in a lot of ways just by being around him and realizing that it's a job, ultimately. He never walked around like he was better than anyone."

"Cool Runnings" has become a winter viewing tradition in some regions and continues to reach new generations, with a presence on Netflix and screenings in schools.

On Thursday, the director and some cast members planned to attend an anniversary screening at the El Capitan Theatre in Hollywood.

Canadian athletes travelling to the current Games in Pyeongchang, South Korea via Air Canada were able to watch it on their flights.

"Super hokey, but what I really like about it is I'm seeing faces in the movie who are still in the sport. It's a great story."

Justin Kripps, a bobsledder from Summerland, B.C., says he loved the movie growing up and but has a few quibbles.

"When they go down the Calgary track, they go Corner 1, Corner 2, Corner 7, Corner 4, Corner 7 again. They just kind of replay the exciting corners over and over," he says.

"When they carry the sled across the finish line, that's impossible. It's too heavy."

With files from Donna Spencer