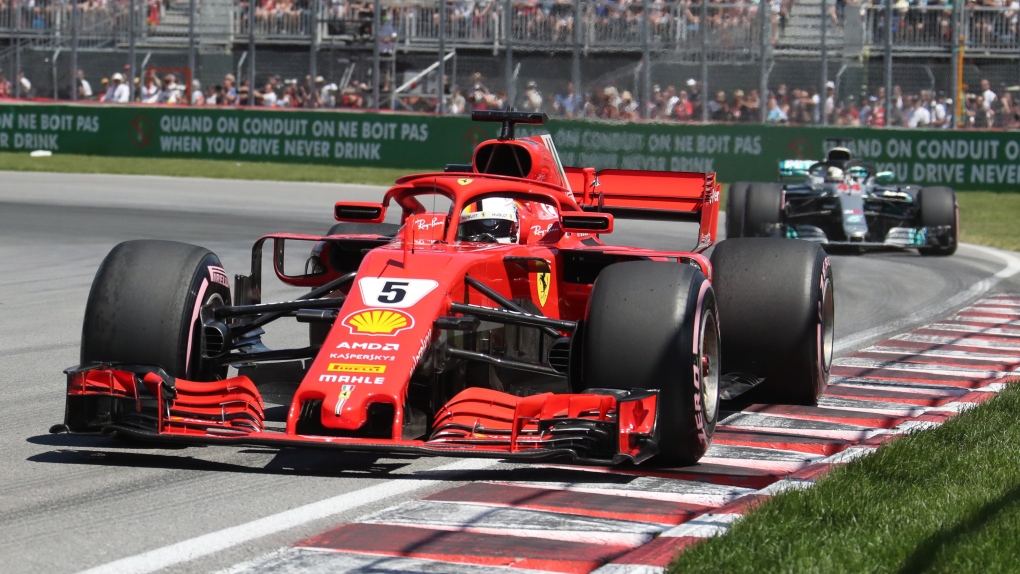 Ferrari driver Sebastian Vettel of Germany leads Mercedes driver Lewis Hamilton of Great Britain through the Senna corner on his way to winning the pole position during the qualifying session at the Canadian Grand Prix Saturday, June 9, 2018 in Montreal. THE CANADIAN PRESS/Tom Boland

MONTREAL -- It was all about Ferrari at this year's Canadian Grand Prix and Sebastian Vettel sealed it with a victory.

Vettel was well aware of the many Prancing Pony flags in the packed grandstands at Circuit Gilles-Villeneuve as he kept the lead from pole position and coasted to victory on Sunday.

It was the Italian team's first Canadian GP win since Michael Schumacher in 2004, a race Vettel watched on television as a teenager at home in Germany.

It was also the 50th career victory for the 30-year-old, who was a four-time Formula One champion in his days at Red Bull Renault.

And it came as the event celebrated a rousing win 40 years ago by another Ferrari driver -- Gilles Villeneuve of Berthierville, Que, whose son Jacques drove his dad's 1978 Ferrari around the track in the pre-race parade lap.

"Like every grand prix there's not one person to dedicate it to," said Vettel. "I dedicate it to the team and to the Canadian (Ferrari) fans.

"I think they've waited long enough for Ferrari to do well here. Forty years after Gilles won his Grand Prix here, I think it's great to show that Ferrari's still alive, winning races. I'm extremely proud to become part of that story. Hopefully a bit more in the future."

A race known for spills and mishaps was mostly uneventful, other than a crash that put local favourite Lance Stroll of Montreal out only a quarter of the way through the first lap. And a miscalculation that saw a race official waive the checkered flag when there was still one lap to go.

It could have been nasty if fans jumped onto the track thinking it was over, or if a driver let up and got passed, but none did and Vettel wasn't fooled.

"That was funny," said Vettel. "On my steering wheel they have the lap count and it showed one more lap to go.

"I even watched on TV and it said 'final lap.' I asked and they said 'keep pushing.' I was a bit confused. Some of the marshals were already celebrating. I think they peaked a bit early, but most of them are men so it might happen. But overall, it's been a great day."

The top three kept their positions from the start, with Vettel leading ahead of Mercedes driver Valtteri Bottas and Red Bull's Max Verstappen. Vettel's lone pit stop on the 38th of 70 laps saw him emerge with a six-second lead that was never threatened.

Daniel Ricciardo, a winner two weeks ago in Monaco in another race panned for being dull, brought his Red Bull in third, just ahead of defending champion Lewis Hamilton's Mercedes. Hamilton has won the Canadian race six times, including the previous three.

But Vettel passed the Briton for a one-point lead in drivers standings.

Mercedes were never in the victory equation, having not got engine updates ready in time for the race while Ferrari and Red Bull both had new parts. Hamilton came within a second of challenging Ricciardo late in the race, but then encountered fuel troubles. It was the same for Bottas running behind Vettel.

"With the start we had, with the race we had, there was nothing more we could do," said Bottas, who has finished second four times this season, but hasn't yet won. "Ferrari was better than us this week, with the Red Bull very close to us, so I think there was nothing we could have done better.

"Our car wasn't good enough, so I won't get too upset."

They should have new pieces for the next race June 24 in Le Castellet in France.

Nico Hulkenberg and Carlos Sainz of Renault, Esteban Ocon of Force India and Charles Leclerc of Sauber also finished in the points.

It was a short day for the lone Canadian as Stroll's Williams slid across the track and rammed New Zealander Brendon Hartley of Toro Rosso into a wall. Both cars were badly damaged but the drivers were uninjured. Hartley went to hospital for precautionary tests but the team said he was OK.

A steward's investigation found neither driver at fault.

"It's unfortunate, I had a good start," said Stroll. "I was 13th after the first two turns.

"Then our cars were side by side. I had a moment of oversteer. He forced me to the inside. I corrected, but I didn't have enough room, and we collided along the wall."

Stroll, 19, was in is second Canadian GP. He earned his first Formula One points with a ninth-place finish at Circuit Gilles-Villeneuve last year.

It was the 300th F1 race for two-time champion Fernando Alonso of McLaren, good for fourth all-time. The Spaniard was forced out with engine trouble after 42 laps.